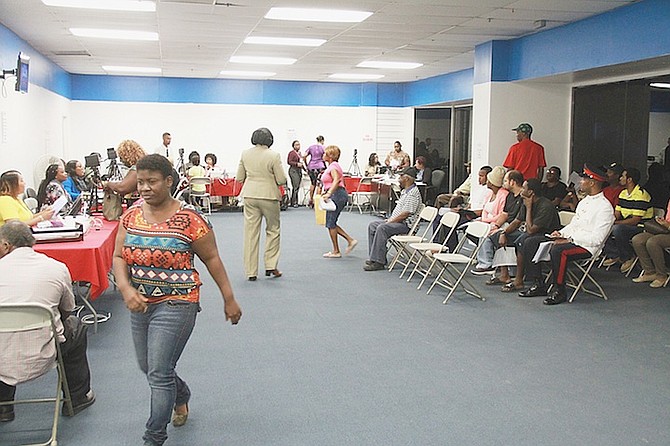 NHI registration started on Monday and Bahamians came out in good numbers at the Town Centre Mall location to get an early jump on signing up.Photo: Tim Clarke/Tribune Staff

Mr Gibson said Dr Minnis’ comments were the “greatest degree of hypocrisy ever in the history of The Bahamas”.

He added that the government plans to create a “special fund” to assist individuals suffering from illnesses “beyond what primary healthcare would provide”.

The Christie administration plans to roll out a primary healthcare package for NHI in April and a vital healthcare benefits package sometime within the next year.

The government has said that there will be a catastrophic fund for people who are particularly sick and need a greater level of care. However, while the details of these plans have not yet been fully explained, the particulars of how the government will address the catastrophic care provision are even less clear.

Dr Minnis, in an interview with The Tribune last month, reiterated that a NHI scheme that does not provide catastrophic care will not help Bahamians in the way they need it most.

Dr Minnis said rather than focus on primary healthcare, the government should review its proposed NHI scheme, make a determination “about which diseases are having the greatest impact and causing the most problems” and subsequently have that grouping covered under NHI.

“When I saw Dr Minnis’ comments, I thought it was the greatest degree of hypocrisy ever in the history of The Bahamas,” Mr Gibson told reporters yesterday. “He introduced the Prescription Drug Plan as a platform to National Health Insurance. He said that was their first phase. Well we’re now introducing primary healthcare, and he said unless we’re able to introduce the catastrophic care package then we shouldn’t introduce it.”

Mr Gibson was referring to Dr Minnis’ tenure as minister of health under the former Ingraham administration, when he oversaw the introduction of the National Prescription Drug Plan, which provides medication to people with certain non-communicable diseases free of charge.

“Well, it was fine for him to introduce the Prescription Drug Plan, but we shouldn’t introduce primary healthcare which will actually help for you to identify and recognise illnesses at an earlier stage and help to create a healthier individual, so that perhaps some of those persons who would normally move on to the catastrophic level won’t move on to it,” Mr Gibson said.

He added: “The idea is to create a special fund where we are able to assist those individuals when you identify illnesses beyond what primary healthcare would provide for. And so the idea right now is to start primary healthcare, get it off the ground. Once we’re able to tweak it then we’ll move on to the next phase, and that phase may include a more comprehensive (catastrophic care package).”

According to a statement released by the NHI Secretariat on Sunday night, the plan will include five phases: registration; enrolment; primary health care coverage; select catastrophic coverage and full benefits coverage.

According to the statement, primary coverage includes doctor visits, prevention services, diagnostics, and medication through a primary care provider.

“In this phase, all health costs for primary care services will be paid for by the government through general revenue collected by the Ministry of Finance (commonly referred to as the Consolidated Fund),” the statement added. “Full benefits, including catastrophic care for major illnesses, will be included in NHI as the programme progresses.”

“While all legal residents in The Bahamas are entitled to care under NHI, those who currently pay for private health insurance can maintain their current policies if they so choose,” the statement said. “However, it is possible that your insurance policy may change given that primary care services will be covered by the government through NHI. Additional health insurance you purchase could be a top-up to your NHI coverage.

“Enhanced capacity in the health sector will be realised because NHI beneficiaries will be allowed to choose providers from either the public or private sector.”

did the oxford dictionarty just add this combination in 2016? used to be a single word

Ah you got there first lol. And not both words capitalized lol

Enhanced capacity: Doesn't look like either public nor private sector medics are gullible enough to buy into this pig in a poke scheme. Maybe sick people could come by the HOA and BJ or Gomez could attend them in the smoking room ?.

Comrades if the red shirts really think they can win the 2017 General, by running a losing campaign to deny BahamaCARE to a majority of the 374,000 Bahamalanders - the morning after a majority of the votes cast have been counted against them - they'll be whistling passed the gravediggers who be's dugging da graves for all their voters rejected red candidates.
If the reds lose in 2017, it's a certain Adios Amigo for anything and anyone wearing da colour red.
Have the leadership no idea what kinds things "Big Bad" Brad will unleash upon backs their red candidates?

If these plp demons are re-elected in 2017 we will see just how that 'majority' who put them there will be able to support their hare brained schemes, as the productive ones who had stayed behind will hasten to make their exit from what will truly be a wasteland. The inevitable brain drain, no one making money, and the abundance of brainless sheep sitting with their palms up and looking for a hand out will lend to the demise of this once great and prosperous nation.

You said it girl. The exodus has started; the mad rush is coming!

Did you mean to say "Most Typo Critical in History?"

Tal definitely got a horse in the 2017 yellow jacket race.

Comrade MonkeeDoo shouldn't you redirect your remarks at the reds who should be spending less time and energy at seeing who is better at upstaging the others on the executive, than they are at walking the damn streets constituencies - signing up potential card carrying members, whom the party will need to work the 2017 General campaign and man the polling stations.
I just heard Loretta had her 55th birthday party but like she did up in Marsh Harbour before the 2012 General - forget to invite her leader Minnis, but not the other50 red "upstages" she feels are ready to perform on her stage?
Someone needs send her a memo reminding her that her own red convention delegates voted 3 to 1 AGAINST her leadership.
If Minnis really had bullocks he would tell Loretta in the clearest of languages that he will not sign her nomination papers to run for the red party in Long Island nor any other constituency come the 2017 General. Minnis it's called man your own stations cause the fight lead by your known political enemy ain't going away. - not waiting around for them sneak up behind you and stab you in da back. If you don't think so - so be it.