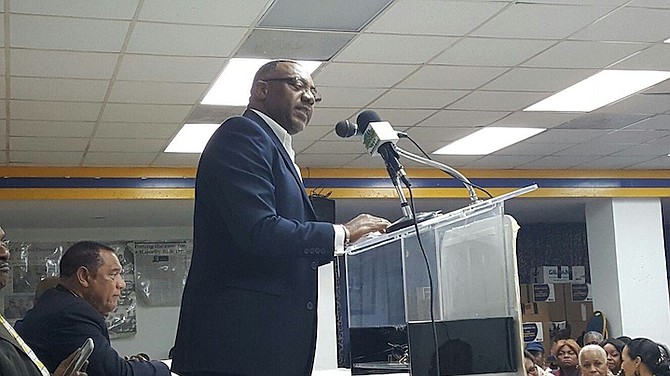 BYRON Woodside, a former Cabinet Minister under a previous Free National Movement (FNM) administration, has lauded the Progressive Liberal Party (PLP) as an organisation that is unmatched in its contributions to the nation’s social, economic and political progress.

Before a packed audience at the PLP’s headquarters on Farrington Road on Thursday night, Mr Woodside addressed the crowd following his introduction to the party as its newest member by Chairman Bradley Roberts.

Mr Woodside was the previous Pinewood Gardens Member of Parliament and lost against the constituency’s current MP Khaalis Rolle in the 2012 general elections.

“It (the PLP) has a record of a party that has fought for the rights and more over the dignity of people of colour having ushered in majority rule in 1967,” Mr Woodside said during his first address to the party.

“The PLP’s stellar record is unmatched. It is unmatched in terms of contributing to the nation’s progress in the social, economic and political arena. The PLP led the struggle over all these years in propelling generations of Bahamians both old and young to be uplifted from poverty to prosperity, from insignificance to sophistication (and) from indignity to distinction.

“The PLP has chartered the course of this nation and it was done by great Bahamians.”

Mr Woodside is a petroleum marketing expert, an attorney-at-law and a former Minister of State for Lands and Local Government.