Rescued From The Rubble 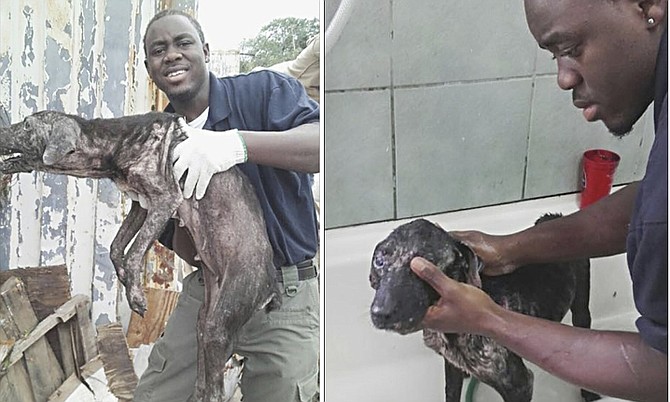 LEFT: The rescued dog after being pulled to safety. RIGHT: The dog was later cleaned up by rescuers. 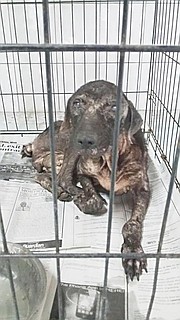 LOST within the heartbreaking tale of a demolition exercise that displaced a local outreach organisation and dozens of its beneficiaries is the successful rescue effort by the Bahamas Humane Society (BHS) to save pets buried beneath the rubble.

As bulldozers moved in last Thursday on a Pine Barren Road property occupied by the Ambassador Corral International Association (ACIA), residents fled in horror and animals scurried for shelter. Most of the animals kept on the compound were injured and at least one was killed in the process.

According to the BHS, once they heard reports of the incident teams were dispatched to the scene to aid where possible. Inspectors with the BHS discovered a ravaged site that “looked as if a hurricane had passed through. Structure, rocks, trees household items scattered everywhere,” the organisation noted in a Facebook post.

Residents quickly alerted them that all but two of the animals were accounted for and well. The first dog had to be sent to the vet with a broken leg, the second was feared dead or missing.

Percy Grant told The Tribune that it was at this point the BHS team understood the seriousness of the situation. “We stumbled upon the first dog somewhat quickly, but remained focused on finding the other,” he said.

Residents suspected that the remaining dog, in panic, had probably attempted to find shelter near an area of the property where tenants kept most of the animals. The inspectors were led to the area.

“The bulldozers came unannounced,” the children explained to the BHS team, “and we were able to release all the other dogs from their cages except for one dog.”

Three days earlier, a resident had discovered a wounded stray dog on the roadside and, determined to nurse the dog back to health, had decided to take the animal in. By the time the children had got to the area she was in, the bulldozers had already began their work.

Now, trapped beneath heaps of rubble, the weak, terrified and innocent dog could be heard whimpering.

The BHS reported that with the help of the children and other persons on site, inspectors were able to dig through the piles of rubble, which included large stones, chairs, a fridge, broken pieces of wood, clothing, dirt and sharp metal. The entire roof of what was once a small cabin had to be broken down and removed.

Two hours into the effort someone shouted “See her here!” The dog’s head emerged from under a broken palette. She was alive.

BHS inspectors described the scene as a cheerful one, noting that many were teary eyed. The dog was rushed to the BHS shelter where a team was already set up awaiting her arrival.

Management and staff at BHS agreed to name her “Hope” because of her touching rescue.

Hope is now in good spirits at the BHS Chippingham shelter. She is expected to make a full recovery and be released in two to three months.

The disputed land in the Prince Charles Drive area was home to some 46 beneficiaries of ACIA and the bulldozing justified by the family who owns it according to a court order dating back to May 9, 2014, which stipulated that ACIA was to vacate the property from August 10, 2014.

ACIA Managing Director Michael Bullard said that while his organisation was made aware of the August 2014 deadline, it was by way of a legal letter from the law firm Cash Fountain and not an actual court document. Mr Bullard also claimed that the court document that the legal letter referenced was only given to him recently by the property’s alleged previous owner, Warren Aranha.

He further claimed that Mr Aranha allegedly instructed the organisation to stay put since they had already made payments to him to acquire the land.

William Fountain, a laywer with Cash Fountain and whose family owns the land, said that while the demolition appeared to be callous, the ACIA had ample time to adhere to the ruling.

Last Thursday, Mr Bullard stood by helplessly as bulldozers ripped through homes and other buildings erected on the property while various persons scrambled amidst the chaos in an attempt to salvage what little they could of their belongings, which included clothes, instruments and pets.

According to Mr Bullard, a number of farm animals, cats, birds, and rabbits were killed in the demolition. Mr Bullard also claimed that living quarters, four offices, three security booths, as well as facilities that housed the organisation’s Royal Diplomat Academy were also destroyed in the process.

Comrade Lands Owners Plaintiffs, please in name the Almighty God, let's this horrific photograph serve to remind y'all to never act as more than one land owners has so chosen done's in their quick to bulldoze demolish mentality to knowingly be willing to risk turning into a war zone da dwellings and structures of da housing people's and children's defenseless pets.
Just because something was made all Supreme Court Legal, doesn't means it right, nor should such actions be tolerated by any nation's people's, community or society.
Dear Comrades if this horrific action taken is acceptable, may the Devil himself place his satin's stamp over our Bahamaland for the tourism world to see, who we really are as a people's in our ; It's NOT Better In we Nassau Capital of The Bahamaland!

Very Disturbing, someone needs to go to jail for this.