Cost Of Living To Go Up After Power Increase 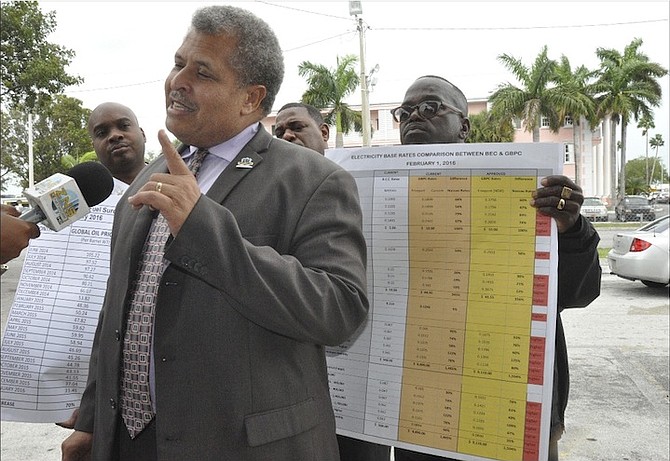 Pastor Eddie Victor warning of the rise of living costs in the wake of an approved rise in electricity charges. Photo: David Johnson

THE Coalition of Concerned Citizens said that Grand Bahama would experience further increases in the cost of living as a result of the recent electricity base rate increase approved by the Grand Bahama Port Authority.

Pastor Eddie Victor, a representative of the CCC, accused the GBPA of being more on the side of big business rather than safeguarding consumers in its role as regulator.

“The regulator has joined in line with the power company that is profit driven, and not people driven,” he said at a press conference yesterday. “We need development partners in our island to help to bring our island to the place it needs to be.”

Pastor Victor said CCC will march in protest at 5pm today, starting from Pizza Hut on the Mall to Kentucky Fried Chicken in downtown, Freeport.

The GBPC’s revised rate application –reducing the initial proposed average base rate increase from 3.5 per cent to 1.5 per cent – was approved by the GBPA, which released a statement late Monday announcing the move.

The new rate will take effect on February 1, and will result in all customers seeing their total (all-in) power bill decreased between seven and 12 per cent, the GBPA said.

Pastor Victor said that CCC has had the opportunity to analyse the revised new rate and claims that talk that the new rate will lead to savings is just a red herring to distract consumers.


“What has been presented by the (GBPC) and approved by the regulator is that they are netting together what they refer to as ‘all in’ rate - the base rate and fuel surcharge. And they are using the fact that global oil prices have dropped drastically and they are netting the savings that should be passed on to the consumer along with the rate plan to give the impression that they are giving a discount to consumers. It is all smoke and mirrors. Really, it is a tactful way to take advantage of the low global oil price economy and to use it as an opportunity to increase their base rate in electricity.”

He noted that the price of oil has been steadily declining, but electricity costs on the island have not fallen as sharply.

“What has happened is that as oil was going down, they did not pass it to the consumers.”

“When doing further analysis of the fuel surcharge, we realised that GBPC has failed to pass on millions of dollars in savings to the customers because they have not brought down their fuel surcharge in line with global oil prices and they are hiding behind an excuse called hedging – it is a big excuse.”

He has frequently said that businesses have closed and new investors are turned off from Freeport because of the high cost of electricity.