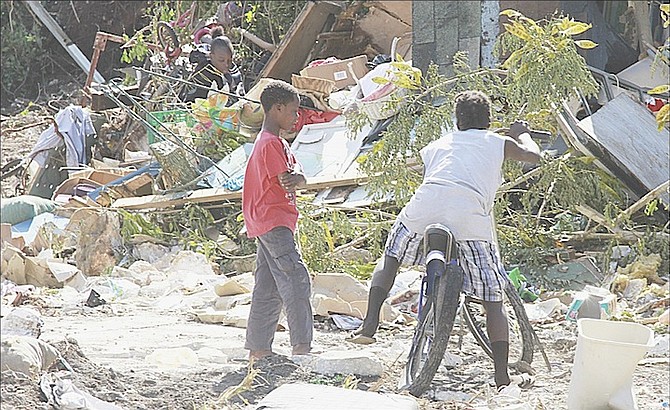 Youngsters picking through the debris on Sunday at the site near Prince Charles Drive after bulldozers moved in last week. Photos: Tim Clarke/Tribune Staff

A number of farm animals, cats, birds and rabbits were also killed or injured as a result of the demolition, Mr Bullard said.

The property was home to 46 beneficiaries of ACIA, most of whom, Mr Bullard said, have had to seek lodging at motels until the Department of Social Services lends its assistance.

When contacted for an update on Friday, Mr Bullard told The Tribune that his attorneys are now in the process of “setting us up to go back to court on Monday”.

He added that they also want clarity over the long-standing dispute on who actually owns the property on Pine Barren Road.

Last Thursday, Mr Bullard stood by helplessly as bulldozers ripped through homes and other buildings erected on the property while various persons scrambled amidst the chaos in an attempt to salvage what little they could of their belongings.

The day after, William Fountain, of the Cash Fountain law firm, told The Tribune that the demolition was justified according to a court order dating back to May 9, 2014, which stipulated that ACIA was to vacate the property from August 10, 2014.

Mr Fountain claimed that his family rightfully owns the land.

However, Mr Bullard subsequently claimed that the court document which the legal letter referenced was only given to him recently by Warren Aranha, the alleged previous owner.

Furthermore, Mr Bullard claimed that Mr Aranha instructed the organisation to stay put since they had already made payments to him to acquire the land.

In previous interviews, Mr Bullard claimed that when the group acquired the land from Mr Aranha, around eight years ago, he performed background checks on the land which revealed that it was “clear in title by the Bahamas government”.

He needs to sue the person that "sold" him the land, or if in doubt, sue both. In the last article, he claimed to have just recently seen the 2014 judgement that declared the Fountains as the owners and that for 8 years he was getting tractors and threats. It is interesting that even now, he is not attempting to hold the seller accountable.