Salvation Army Calls For Aid, Saying Need Has No Season 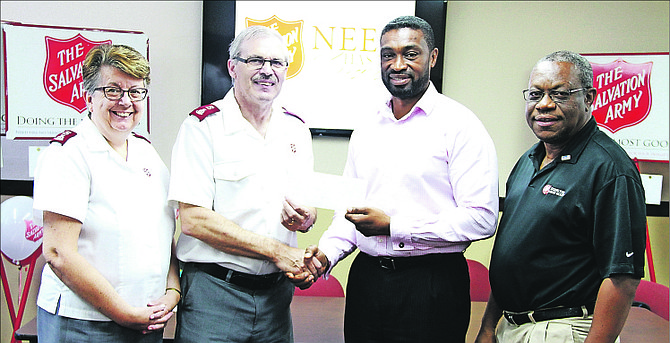 By PEANDRA PRATT and AARON MILLER

THE Salvation Army believes that giving is not necessarily just for the holidays such as Christmas but it should be an all-year-round practice.

Yesterday, the Salvation Army launched its first “Christmas In July - Need Has No Season” fundraising event in an effort to offset the decrease in summer charitable donations that the organisation has detected in The Bahamas.

The campaign will highlight that need has no season and people are in need throughout the year and not just during the Christmas period. During the summer months, the Salvation Army has noted a decrease in giving among the people of The Bahamas so they intend to raise awareness with this summer fundraising event.

“We have to realise that there’s not just need at the end of the year, there’s need in January, March, September and so on,” said Felix Stubbs, vice chairman of the Salvation Army’s Nassau Advisory board. “So as the Salvation Army, we feel it’s our obligation to help as many people as we can year round and not just during the Christmas season.”

The Salvation Army hopes to raise a minimum of $25,000 from this mid-year charity event and with eight people having donated $1,000 each already, it is optimistic about reaching its goal despite acknowledging the challegning economic climate.

“We continuously look for partners we can work with to help our communities and we are very impressed with the Salvation Army as they seek through social action to help those who are in need. So we use this as an opportunity to partner with them through our financial contributions and our support,” Mr Sealy said.

The Salvation Army hopes that the ‘Christmas In July’ campaign can generate funds for one of their major projects, a women’s crisis centre in Bain Town. The centre serves as a refuge for troubled women and their children. The Salvation Army plans to expand and enhance the centre to accommodate more women and children short-term until they can get back on their feet.

Other Red Shield programmes by the Salvation Army – such as the feeding, after school, School for the Blind and the emergency help programmes – will also benefit from the funds raised.

The Salvation Army aims to ensure that people in need have at least one hot meal per day and the homeless receive at least two sets of fresh clothing per week. It is trying to improve on what it is already doing. The organisation is appealing for donations both financial and practical, such as food, clothing or electronic items.

The Salvation Army’s signature red kettles will be used for the campaign to attract donors.

Sealy is a crook and a cheater. Careful who you take pictures with gents.