PM: Trust fund for inmates who work in construction while in jail 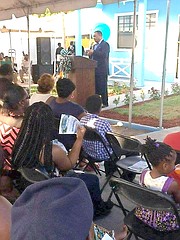 PRIME Minister Perry Christie hinted on Friday that the government will establish a trust fund for inmates of the Department of Correctional Services who participate in construction and other service programmes, enabling them to collect money to assist in their reintegration into society after leaving prison.

His statement came as he, National Security Minister Dr Bernard Nottage and others celebrated Urban Renewal’s completion of a 1,300 square-foot home on Alexandria Boulevard in Nassau Village.

Thirty inmates spent four months constructing the home for Cynthia Hanna and her seven children after the government decided to improve on the dilapidated structure in which she once lived.

Dr Nottage, who took intimate interest in seeing the project complete, sometimes visiting the area twice weekly, said he nearly cried when Assistant Police Superintendent Kirk Douglas of the Nassau Village police station took him to the area and showed him the run-down home in which Ms Hanna once lived.

With her children, Ms Hanna was placed in an apartment in Nassau Village while her new home was being constructed.

The home was built at no cost to the government, Dr Nottage said, as labour was provided by the inmates of the Department of Correctional Services and the materials for the structure were donated.

The Christie administration has prioritised rehabilitating prisoners, teaming up, for instance, with the Inter-American Development Bank to implement a parole system, which has not yet been introduced.

Friday’s ceremony marking the completion of the home is the most significant milestone for the programme Dr Nottage has called “Inmates Industries”.

Mr Christie said: “What you have demonstrated to me that is that if (you) have the capacity to (construct this home), then the government ought to be in a position, given the great need in housing that exists, given the fact that today we have houses under contract, to be able to identify a number of opportunities for young men like these here; create a trust fund for them where the monies that will be paid for the construction of the homes will be put in trust for them, so whenever they are released they have access to start off their reintegration. What it does is it puts under government watch and supervision a process that will cause the gentlemen, as they build and construct for people who will live in the homes, to know there’s an end game, there’s an end result for them. That, to me, properly done, will also enable them to have some of that to assist them with whatever you can assist people in confinement with.”

Mr Christie said the programme will enable inmates to have a new beginning.

He said: “Dr Nottage, I would expect therefore for you to cause these gentlemen to virtually incorporate a company, call it whatever you wish … and have them be seen with doing this kind of work in the Bahamas.”

Dr Nottage said one of Ms Hanna’s children, Adria, had received among the best Bahamas Junior Certification (BJC) examination results in the country.

Elaborating on Mr Christie’s references to a company, he said: “We’re going to have a construction company before next year.”

“The intention is really to form companies which are owned by the correctional centre, primarily to find jobs for people after they’ve been released from prison,” he told The Tribune. “So we have a number of programmes going on in the prison now so that when they leave prison they have somewhere to go, some finances to start them off and they have a job if they wish. I’m tired of people who fall foul of the law losing all their rights,” he added.

Asked about her new home, Ms Hanna said: “God is good all the time.”