Recruits Prepare For Training To Defend The Nation 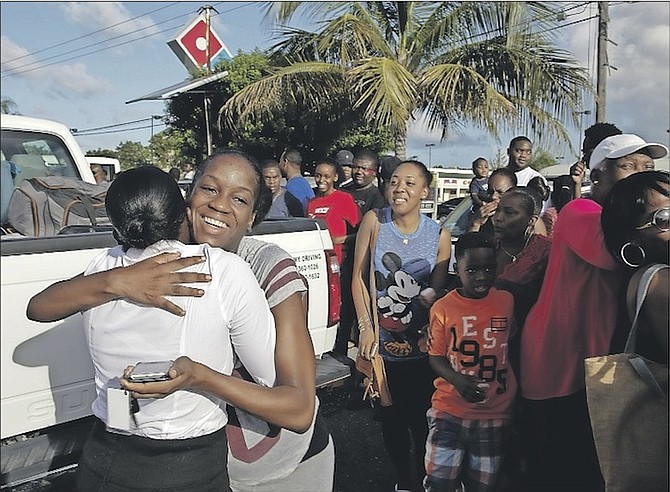 THE faces of families, friends and well-wishers beaming with pride at the Golden Gates Shopping Plaza could not be hidden as 77 recruits prepared themselves to be inducted into the Royal Bahamas Defence Force last weekend.

Shouts of joy and congratulations could be heard from the large crowd witnessing this latest group of future Marines being ushered in for a life-changing experience.

The squad, which comprises New Entry 54 and Woman Entry 23, starts training at the Coral Harbour Base for four months. This basic training is intended for the young men and women to be absorbed into the military culture and to be taught the various professional, academic and physical disciplines of the Defence Force.

The training is designed to develop the discipline, teamwork and leadership skills of recruits, equip them better for the fight to protect the sovereignty of the Commonwealth of the Bahamas.

Meanwhile, one eight-year member of the RBDF has returned to the Bahamas after successfully completing a three and a half year programme at the New England Institute of Technology in Rhode Island.

In Rhode Island, Able Mechanic Adderley was an active member of the Rotoract Club, Peer Leadership Club and Skills USA, all of which assisted him in fulfilling philanthropic work within the community, as well as an opportunity to further enhance his leadership and communication skills. He received the Newman Civic Fellows Award and became president of the Rotaract Club in 2015. The award is one that is earned by students who best demonstrate strong leadership ability and steadfast commitment to finding solutions for challenges within their varying communities.

Able Mechanic Adderley was attached to the Engineering Department after the completion of New Entry training in 2008. He has served aboard on several of the Defence Force patrol craft as a Marine Mechanic, and was also granted an opportunity to train within his field at the International Maritime and Education Training (IMET) in Fort Myers, Florida, in 2009. He is currently attached to the Engineering Department, and had the experience to work on one of the newest vessels procured under the Sandy Bottom project, HMBS Lawrence Major.

“As a result of the trust, confidence and blessings of the organisation’s study board, I was able to achieve a lifelong goal,” he said.