A ‘Breath Of Fresh Air’ For Bahamas Baseball 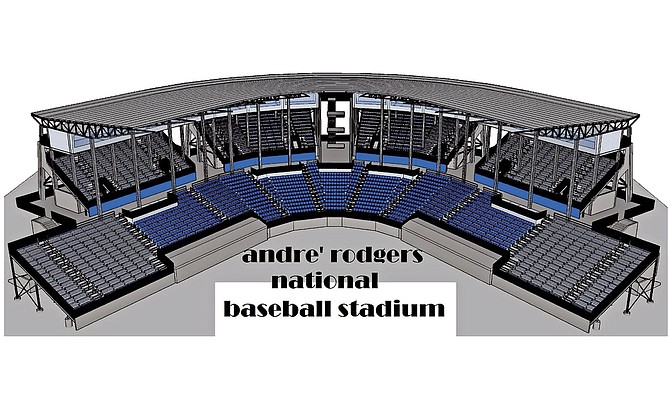 Now two years later, the Bahamas Government has finally announced that work on the construction of the new Andre Rodgers Baseball Stadium will finally commence.

The latest occurrence was like a “breath of fresh air” for the sport, which has produced more players in the pipeline of professional baseball from the youth level without a proper stadium since the original Andre Rodgers Baseball Stadium was demolished in 2006.

Woslee Construction has been contracted by the Ministry of Works and Urban Development to construct the 4,500-seat stadium opposite the Government High School at a cost of $21,351,507.55.

“On this occasion, I want us to remember our heroes,” Prime Minister Perry Christie said. “I think of Reno Brown, who was a long time executive; I remember the night that Wenty Ford pitched a close game in the Major League and how we hurdled at the home of Allan Jackson, another great contributor to the sport, to watch the game.

“I’m a long time associate of Ed Armbrister, who was involved in that controversial batting incident for the Cincinnati Reds. This point has arrived at through the sweat and glorification of baseball by many who have passed on to their enternal reward and others who are still around like Asa Ferguson.”

Christie saluted those persons who worked tirelessly to get the stadium off the ground, mentioning Senator Greg Burrows, who started Freedom Farm, as well as the BBF and the BBA and all of its members including Craig ‘Salty’ Kemp and the late James ‘Jim’ Wood and Minister of Youth, Sports and Culture, Dr Daniel Johnson and all of the families, who impacted the sport over the years.

With the construction of the new baseball stadium at the Queen Elizabeth Sports Centre joining the new Thomas A. Robinson National Stadium and the old track and field stadium, the Betty Kelly Kenning Swim Complex and the refurbished Kendal GL Isaacs Gymnasium, Christie said it’s his hope that some attention will be given to facilities in the Family Islands.

“We have something that no one else in the world has,” Johnson boosted. “We, in the NSA, have a shared interest and I’m only interested in one, I always want to win and I want my country to be number one. I have no other interest at all.

The stadium, which had a groundbreaking in November 2014, will be constructed on 24.80 acres of land when the work commences immediately by Woslee Construction, as revealed by Deputy Prime Minister Philip ‘Brave’ Davis.

In his address, Davis, who serves as the Minister for Works and Urban Development, said when completed, the stadium will have a 4,500-seat capacity, two auxiliary practice fields to the east of the stadium, locker rooms, meeting rooms, physical therapy/training rooms, vendor spaces, eight luxury boxes, state of the arts audio visual scoreboard, parking and offices for the Bahamas Baseball Federation.

Michael Foster of Arconcepts Limited designed the facility, indicating that he wanted to keep it in line with what has already been established in the QESC with the new Thomas A. Robinson National Stadium, which was constructed by the People’s Republic of China as a gift to the Bahamas.

“The design allows for a lot of space, usable space. We were actually able to get office space and locker rooms under the grandstand,” Foster said. “So we have been able to get more out of it than normal.

“Whereas persons were discussing it for a long time, they had no idea that the construction started back in October last year. The Minister leaked it out that we should see parts of it (stadium) rising up shortly.”

Once the actual work commences, Foster said the design calls for the construction to be completed within a 52-week process.

Colin Higgs, Permanent Secretary in the Ministry of Youths and Urban Development, said this is a significant day because the new stadium will meet the international standards and will be able to host Major League baseball teams in spring training camps and will be able to accommodate the national baseball tournaments.

“The contractor has been mobilized and he is getting ready to start his work,” Higgs said. “The grandstand is just about 90 percent complete. So the contractor will first have to prepare the ground so that the grandstand can be erected.

BBF president Theodore ‘Teddy’ Sweeting said the announcement gave him the opportunity to reflect on the many great baseball players who left their mark on the sport.

“I’m very excited,” he said, thanking past presidents Greg Burrows and Craig Kemp for the role they all played in getting the process started.

“I say thank you to our government. I don’t know if the Deputy Prime Minister can remember about three years ago at one of our youth parks. He told me, when I served as secretary general, ‘Teddy, I’m going to get you the new stadium that you so desperately need.”

With 14 young men now playing professional baseball, Sweeting said the new stadium would only help to push the sport as they take advantage of the future growth and development.

Oria Wood, who has assumed the responsibility for the BBA after the death of her father, Jim Wood, the long-time president, said the only thing she could say is “vow.

“I’m really excited. It’s sort of vow to me. My daddy spent his whole life in baseball, being a mentor to a lot of young men,” she said. “When the baseball field went down, it crippled senior baseball in this country. But to see it coming back is a good time.

“We have a lot of young men out there playing baseball in college and in minor league, so hopefully we can get to some college ball and even pro baseball. So it’s an exciting time for baseball right now.”

As for her involvement in the sport, the Sports Director at the Ministry of Youth, Sports and Culture said she’s taken a back seat and has passed her role onto Marvin ‘Tougie’ Wood and she’s hoping that they can put some officers in place to continue the legacy that her further left behind.

Terran Rodgers, one of the advocates for baseball in the country, said it’s a great step towards getting baseball back to where it used to be in the 1960s and ‘70s.

“My hope is that local baseball is able to take proper use of the facility so that we can get our guys back to the level that we used to be,” he summed up.