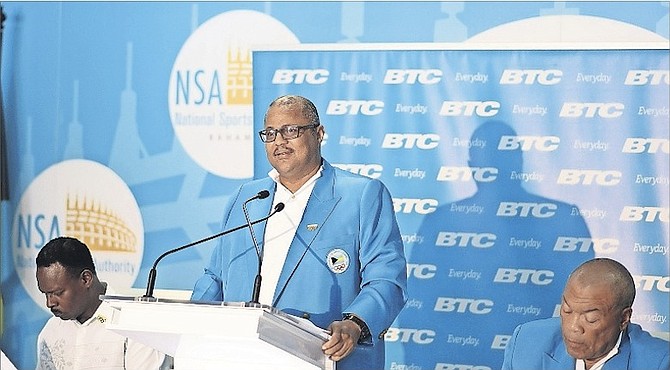 Against the backdrop of a $125,000 sponsorship from BTC, the Bahamas Olympic Committee announced a 28-member team to represent the Bahamas at the 2016 Olympic Games in Rio de Janeiro, Brazil.

The BTC Bahamas Olympic team, scheduled to compete August 5-21, will comprise of 11 females and 17 males, excluding the list of the women’s 4 x 400 metre relay team until the completion of the court hearing for the Russian Olympic team.

BOC secretary general Romel Knowles released the team during a pomp and pageantry press conference at the new Thomas A Robinson National Stadium where there was a cultural dance and a junkanoo rush out.

As expected, all of the athletes from track and field who qualified were named to the team, including former women’s co-national 100m hurdles record holder Devynne Charlton, who has suffered an injury and had to shut down the rest of her season.

“As I speak to you, I will not be able to announce some young ladies on this team because of an indictment that is happening in track and field,” Knowles said. “Some of you know the story of a federation being suspended.

“Our ladies’ team is sitting in 17th place, just one behind a team, I won’t be the judge, who should or should not qualify for the Olympics.”

Depending on the outcome of the international ruling, Knowles said they have advised the Bahamas Association of Athletic Associations that they would include the team of Lanece Clarke, Shaquania Dorsett, Christine Armertil and Carmeisha Cox to the team.

Knowles said it’s so unfortunate, like a case where he had to present Pauline Davis-Thompson her Olympic medal at Government House after an athlete was tested positive for drugs, that the BOC finds itself in another predicament in not being able to name the women’s relay team for the Bahamas.

Should Russia eventually be banned from competing at the games, the women’s team will be added to the men’s 4 x 400 team, giving the Bahamas two of the four relay teams a lane in the games.

As anticipated, track and field will have a bulk of the competitors on the team, led by triple qualifier Shaunae Miller in the women’s 100, 200 and 400m, along with three male high jumpers for the first time in Donald Thomas, Trevor Barry and Jamal Wilson.

In addition to athletics, Team Bahamas will carry three swimmers, headed by two-time Olympian Arianna Vanderpool-Wallace, along with rising star Joanna Evans, who both have also qualified for three events.

The only other discipline named to the BTC Bahamas Olympic team is rowing with Emily Morley making history as the first Bahamian to compete in the non-traditional water sport.

After the announcement of the team, the BOC presented a $5,000 cheque to the Bahamas Lawn Tennis Association to help cover the expenses incurred from the men’s Davis Cup team that travelled to Bolivia.

The team of veteran player/captain Marvin Rolle, rookie brothers Spencer and Baker Newman and four-time team member Kevin Major Jr returned home after going through the week long tournament undefeated to advance out of Zone III and back into Zone II for 2017.

In turn, BTC’s Chief Executive Officer Leon Williams and Vice President, Marketing, Brand & Communications, Eldri Ferguson-Mackey, presented the BOC with a cheque for $125,000 for their second consecutive sponsorship of the Olympic team.

Ferguson-Mackey said the cheque is to assist the BOC in their expenses for the games and she complimented their brand ambassadors, Demetrius Pinder, Arianna Vanderpool-Wallace and Shaunae Miller, who all made the team, indicating that they are expecting some gold from them.

In response, BOC’s president Wellington Miller said the cheque would go a long way in taking care of their expenses for the games, which Romel Knowles echoed that the BOC will be spending on airfare tickets and the per diam for the athletes.

Williams, who made the presentation just 24 hours after they gave $30,000 to the National Sports Authority to assist in hosting the Haitian versus Jamaican soccer game next Friday at the stadium, said BTC is excited about not only sponsoring Team Bahamas, but to also be in position to allow Bahamians to watch the games live from Rio.

“We are looking for some medals, preferrably gold,” Williams said. “For the first time, BTC will be bringing you live the Olympic coverage through our FLOW competition.

“We’re launched in Bimini and Inagua and we have Beta testing in Long Island, Andros and Cat Island and for the first time in history, they will be able to watch Bahamian athletes compete. BTC and FLOW TV have the broadcast rights to the Olympics.”

Through this partnership, Williams said Bahamians won’t have to worry about the broadcast of the Bahamas during the march pass being interrupted by the commercials played by the American, Canadian and British channels during their airing of the opening ceremonies.

For those persons who don’t have the 260 channels offered by BTC, they can access their webpage www.btcbahamas.com/btctv and watch the live coverage or on your cellphones where they can watch FLOW TV as well.

Also addressing the audience were Minister of Youth, Sports and Culture, Dr Daniel Johnson, who wished the team every success; Roy Colebrooke on the role that he ply as the chef de mission; Ralf McKinney as the team manager and Cora Hepburn, a vice president of the BOC, who will serve as the chaperon attache for the team in Rio.

Here’s a look at the athletes selected to represent the Bahamas on the BTC Bahamas Olympic Games: