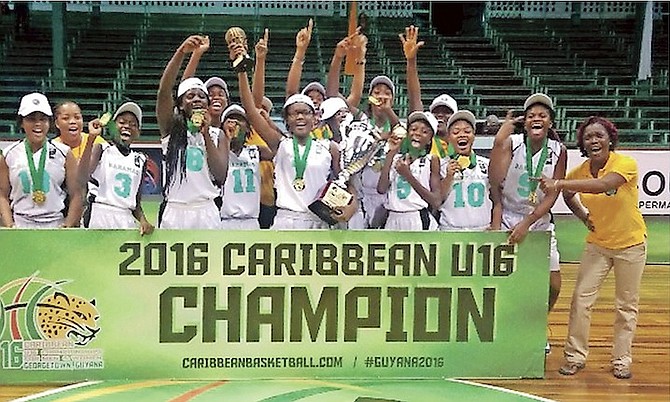 It’s not how you start, nor how you get there. Most importantly, it’s how you finish

• The Finish Line, a weekly column, seeks to comment on the state of affairs in local sports, highlighting the highs and the lows, the thrills and the spills and the successes and failures.

THE WEEK THAT WAS

THE Bahamas Basketball Federation must be commended for the outstanding performances of the boys and girls national teams that returned from the Caribbean Basketball Confederation’s Under-16 Tournament as champions.

The two teams went to Guyana where they dominated the competition, finishing with unblemished win-loss records, albeit in different styles.

While the boys team, coached by Quintin ‘Three Ounce’ Hall and led by most valuable player Domnick Bridgewater, blew out their opponents, the girls team, coached by Varel Davis with Valencia Demeritte as the MVP, had to play some close encounters before they both prevailed in two separate week long tournaments.

Nonetheless, the results were the same. They both returned home as champions.

This speaks volumes for the Bahamas because it marks the first time that the Bahamas has won the two junior titles in the same tournament. And in the process, they both qualified for the CentroBasket Under-17 Championship next year.

The Bahamas has always boasted of a wealth of talent in basketball and it’s not just evident by the fact that we have had a number of players who have excelled at the collegiate and professional level.

Chavano ‘Buddy’ Hield, who is preparing to begin his rookie season with the New Orleans Pelicans after a sensational showing with the Oklahoma Sooners, was once a member of the federation’s junior national programme.

He may not have been one of the stars, but he’s back home this week and he’s receiving his accolades for what has been a tremendous career so far as he makes his transition from the collegiate to the pro ranks.

And although she has yet to get the kind of recognition that she deserves, Jonquel Jones has been stellar in her campaign for the Connecticut Suns via George Washington where she’s averaging 14.9 points, 12.4 rebounds, 1.9 assists, 0.7 steal and 2.3 blocked shots per game.

Although she didn’t play at the junior level, Jones represented the Bahamas at the senior level and if the Bahamas is going to put itself in a position to get to the next level, both Hield and Jones will have to play integral roles.

In interviewing some of the junior players before they left for Guyana, they had listed Hield and Jones as some of their role models. I’m sure the impact that they are both making at the professional level will only help to increase their participation in the sport in the future.

It took seven years, but the Bahamas Lawn Tennis Association can also celebrate as the men’s Davis Cup team has finally advanced from the American Zone III to Zone II again.

Over the weekend in Bolivia, the team f player/captain Marvin Rolle, rookie brothers Baker and Spencer Newman and Philip Major Jr, a four-year member of the team, finally got it done.

Like the basketball teams, the tennis team went undefeated in winning their five games. In their first two matches in the weeklong tournament, the Newman split their doubles, but they combined with Rolle to clinch the doubles.

From there, they went on a roll, sweeping their final two matches on their pool play. In the crossover semi-final, only the Newmans needed to play their singles as they won both, to secure the win and move onto zone II.

The Bahamas has had some tremendous players who participated in Davis Cup over the years when the country played as high as the qualifying round of the World Group in 1993 when the team of Roger Smith, Mark Knowles, John Farrington, captained by John Antonas, got swept 5-0 by the USA led team of Andre Agassi.

While the country celebrates the feat of the team in Bolivia, players like Rolle, Major, Devin Mullings, Timothy Neilly and Bjorn Munroe must be commended for helping to keep the dream alive as they fought year after year to get the much sought after promotion.

The Bahamas is now ranked at No. 73 in the world and this move back to zone II can only fuel the continued success as they strive to get back to zone one next year.

On Wednesday, the Bahamas Olympic Committee announced a 28-member BTC Olympic team to represent the Bahamas in Rio de Jenario, Brazil next month. Yesterday, they added the women’s 4 x 400m relay team to the team, pushing the total to 32.

The stage is now set and it’s time to get the team to Rio.

While hardly any of the athletes will be in town, we can continue to provide our support to all of them as they prepare for competition August 5-21.

No doubt, there will be a lot of debate about who could make a final and who could win a medal. Whatever happens in Rio, we just hope that the athletes can put their best foot forward in representing the 242.