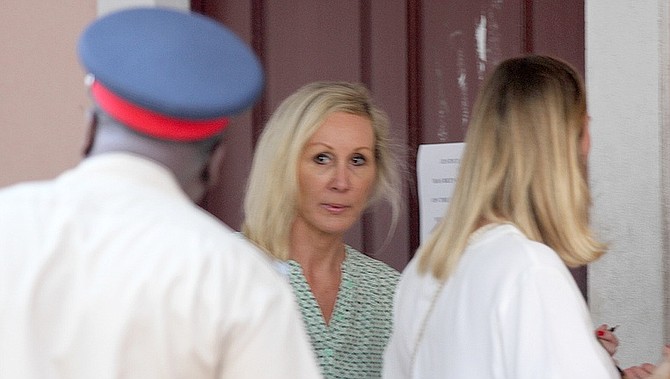 Donna Vasyli outside court at an earlier appearance.

DIRECTOR of Public Prosecutions Garvin Gaskin yesterday challenged a woman’s belief that a jury may not have convicted her of murdering her millionaire husband if the judge had directed the panel to her lack of antecedents on the day the unanimous guilty verdict was returned.

Donna Vasyli, 55, made a return appearance before the Court of Appeal for the continuation of her substantive hearing on her challenge to the jury’s verdict concerning the March 24, 2015 murder of her podiatrist husband Phillip Vasyli.

At a previous hearing before Justices Dame Anita Allen, Jon Isaacs and Stella Crane-Scott last month, Vasyli’s lead lawyer Clare Montgomery, QC, argued that the absence of evidence of her client’s good character during trial might have negatively influenced a jury’s unanimous guilty verdict against her.

She stressed that her client was denied the benefit of having evidence of her good character presented prior to her conviction, which she said amounted to “breach of duty” on the part of defence counsel.

Mrs Montgomery submitted that had counsel ensured that evidence of her client’s good character was led, it would have suggested that Vasyli likely did not have the propensity to murder her husband, and consequently might have resulted in a different verdict from the jury.

However, Mr Gaskin yesterday said that not only was ineptitude or negligence a non-issue at Vasyli’s trial, but stressed: “There is no duty on the trial judge to raise or direct on the issue.”

He added that as Vasyli’s lawyers did not supply the jury with evidence of good character during their defence, it was not an issue for the judge to give a direction to the jury.

However, Justice Jon Isaacs queried if the issue of good character could be raised from the testimonies of key witnesses Myles Pritchard and Nicolaza Quintana concerning Vasyli’s conduct towards her husband’s drunken stupor on the day of the incident.

Mr Gaskin submitted that if the court “is receptive of good character in the non-legal sense, there were other issues raised in trial that pointed to character flaws.”

“Does it really matter why good character direction wasn’t given? At the end of the day, does the absence of it - irrespective of whose fault it is - is this a case where a good character direction should have been given? It had been brought out during sentencing but had it been brought out or raised prior, would it have been a difference,” Justice Crane-Scott asked.

“If it was raised and the judge failed to direct, then there would be an issue,” Mr Gaskin said before citing the Privy Council case of Edmond Gilbert v the Queen (Jamaica) as a reference for the point.

The prosecutor stressed that the case noted that the “judge is under no duty to raise the issue himself as duty only arises where evidence is given.”

Mr Gaskin said that in the instant case, misbehaviour or ineptitude on the part of the counsel that would deny the appellant a fair trial is a non-issue.

Justice Isaacs referred again to the evidence of the aforementioned witnesses.

“When you read Ms Nicolaza’s evidence, she doesn’t mention the presence of the Pritchards. However, Pritchards’ evidence speaks to the cleaning up of wounds at her direction? If he was not present, how would he have seen or heard all of this?” Justice Isaacs asked.

Mr Gaskin said notwithstanding this, there was evidence in Vasyli’s record of interview where she called her husband’s actions disgusting.

“Given the description of the abuse she suffered at the hands of the deceased, would that not speak to character?” the judge then asked.

Mr Gaskin responded that the prosecution had lodged an unsuccessful application during the trial to have emails allegedly sent by the appellant to Lisa Lugo admitted into evidence. The contents of these, he argued, would contradict the good character of the appellant.

“Is it relevant to the proceedings if it was done in the absence of the jury?” Justice Crane-Scott asked.

Mr Gaskin said it was relevant for the present argument of good character that he, maintained, was not an issue or evidence raised at trial. The emails, he said, had been brought to the court’s attention.

“The judge ruled them out,” Justice Crane-Scott reminded the prosecutor.

“However, the court, we say, is able to look at material he has access to,” Mr Gaskin said.

“But it would have to be evidence heard by the jury,” Justice Crane-Scott maintained.

“If in the non-legal sense the court accepts there can be reliance on that point, then the court would also equally be obliged to look at negative conduct to determine whether claim of good character could be disputed,” Mr Gaskin argued.

Vasyli was convicted in October 2015 of the stabbing death of her husband at their home in Old Fort Bay.

At trial, the jury saw Vasyli’s videotaped interview while she was in police custody. During that interrogation, a police officer suggested to the widow that she stabbed her husband for embarrassing her in front of houseguests while he was drunk. She strongly denied the accusation in the presence of her lawyers at the time, Elliot Lockhart, QC, and Judith Whitehead.

During that interview, Vasyli told police that her husband had been drinking and fell down the stairs – shattering glass from picture frames along the way – hours before his dead body was found.

She added that he was walking around the house looking “disgusting” with his pants hanging down even though she told him guests were coming. However, she said, she did not argue with her husband.

She was sentenced to 20 years in prison.

This woman was unfortunately failed by serious shortcomings in her legal representation. Her un-checkered past and the severe abuses she endured from her husband over many years were not properly presented in court for the jurors to consider before their verdict. She was made to succumb to rookie type legal mistakes that sadly happen all too often in our legal system, especially for individuals with no prior criminal record.