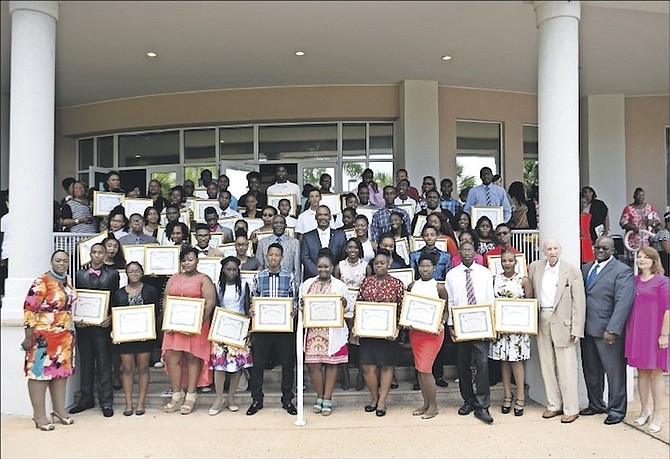 NEARLY 60 students from 16 high schools throughout the archipelago were yesterday honoured as winners of the government’s Public School Scholarship Award, something Education Minister Jerome Fitzgerald called a “very proud moment” for public education in the country.

At the second annual Public School Scholar Awards Ceremony at the Harry C Moore Library on the College of the Bahamas (COB) campus, Mr Fitzgerald called it his “absolute pleasure” to award the 57 students their scholarships.

According to Mr Fitzgerald, 70 students originally qualified for this year’s award, but only 57 accepted the scholarship offer and were able to follow through to the visa process. Otherwise, he said the government “would have been sending even more public school students to schools abroad” to complete programmes of study.

Nonetheless, Mr Fitzgerald said yesterday’s awards ceremony was made possible by the government’s partnership with its 10 university partners that have collectively donated over $3.6m in scholarships over the next four years.

Mr Fitzgerald said those figures, along with a $1.9m, four-year commitment by Munroe College and the Ministry of Education, Science and Technology represents a total investment by the government of over $5.5m.

“This morning is a clear example of why public-private partnerships are so important to the growth and development of a nation,” Mr Fitzgerald added. “Our partnership with the universities and colleges (represented yesterday) have allowed for an increase in access to tertiary education for those who otherwise would not have been able to afford it.”

According to Mr Fitzgerald, the 57 scholarship recipients were all “solid students” who have achieved a cumulative grade point average (GPA) of 3.00 and higher, allowing them to quality for either the government’s academic or technical and vocational public scholar awards. He said they also met all of the admissions requirements of the varied colleges and universities.

Upon receipt of their respective scholarships, Mr Fitzgerald said the students will pursue areas of study “that will meet the national career needs of the Bahamas,” which he said includes hospitality and tourism studies, finance, aviation management and other fields of study.