Ingraham: My Distress At State Of Fnm 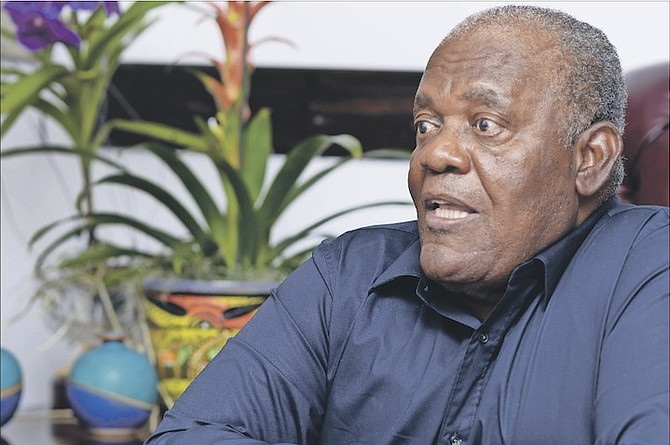 THE current state of the Free National Movement is “distressing” to former Prime Minister Hubert Ingraham, who told The Tribune yesterday the Official Opposition has to put in a lot of work to win over voters whose minds have been “poisoned” by months of public infighting.

In a break from his traditional silence on national issues, Mr Ingraham also revealed that late last year he staved off the first threat from five FNM MPs to have Dr Hubert Minnis removed as leader through a petition to Governor General Dame Marguerite Pindling.

Mr Ingraham also stressed that the now six MPs who have voiced concerns with Dr Minnis should not face retribution, saying he was “disappointed” that the FNM leader refused to answer clearly when asked by the media on Monday what will happen to these politicians if he retains his post.

He also gave insight into the relationship he has with the man who has assumed control of the party he led for 19 years, revealing that he has counselled Dr Minnis on a number of party matters only to be frequently surprised when the Killarney MP made a decision that was contrary to the advice given.

And while he did not endorse a candidate for FNM leader, Mr Ingraham said he hopes whoever wins the party’s leadership race on Friday is more “inclined towards listening to what I say”.

“I have spoken to everybody who is anybody in that context and things get patched up a bit for a short while and go back to where they are. I hope that this convention settles it all. I was disappointed to see in the paper this morning that Dr Minnis did not give a clear and concise answer to the question as to what will happen to these six MPs if he wins – because if he wins, the six MPs will still be MPs.

“If he wins, he will be the leader so they will have to live and co-operate in this big FNM tent together. If either side feels the other side is seeking to be rid of them, they will do what is natural for human beings, take counter measures to protect their own interests.”

Many of the issues plaguing the FNM centre on the dissatisfaction in some quarters about Dr Minnis’ leadership. He has been criticised by members of his own parliamentary caucus as being untrustworthy and ineffective. Dr Minnis has not publicly responded to these critiques but has frequently called for unity.

When asked if he thought Dr Minnis had leadership deficiencies, Mr Ingraham did not answer directly. However, during the interview, he repeatedly stressed that it was up to the party’s leader to resolve any dissatisfaction in the FNM.

“Dr Minnis demonstrates that he has a great capacity, the energy that is being put into maintaining his position as leader, the active work that’s taking place in meeting delegates and discussing with them whatever needs to be discussed to get their support, etc, demonstrates somebody who has got a capacity for political activity,” he replied.

“So it is my hope that he would put that same kind of energy, or a part of it, into energising the FNM and its supporters. And the same goes for Loretta (Butler-Turner). She is demonstrating a lot of energy towards wanting to become leader. Well if they would do that same thing for the FNM, we in the party would be much better off.”

Asked if the Progressive Liberal Party (PLP) has the advantage in the next general election or if the FNM can pull off a win, Mr Ingraham said his party has to satisfy the public that it is unified.

“The next election will be the FNM’s own to win if the public is satisfied that they are not fractured, they put up a reasonable team of people and they put forward a reasonable programme – they would win.

“I think that what is happening now is poisoning the minds of many people and dampening their enthusiasm for the party, but that means that dormant feeling of wanting change can be activated if the party begins to show that they are together and demonstrate that the same kind of energy they are putting into this leadership race, they put into opposing the PLP and putting forward programmes that the public finds acceptable.”

He said the MPs wanted an early convention and a halt in candidates being ratified by the party because they feared the “deck was being stacked” in Dr Minnis’ favour.

He said after meeting with the five MPs, he and Mr Turnquest met with Dr Minnis and advised him to meet with the angry parliamentarians.

“We thought that we had arrived at an understanding that there would be a convention this year, early, by March for instance, and that the point they made about candidates would be taken into account. We got no particular commitment about that, I don’t recall a specific commitment about that. I heard nothing further from it ... the deal was that they would not go to Government House about Dr Minnis. Next thing I know, Wells and Rollins joined the FNM and of course that subsided, that meant that they no longer had the majority.”

“I was out fishing one day ... the week before they announced the convention, I was out fishing, Dr Minnis called me and told me that the MPs had put a gun to his head and demanded he do certain things, etc and he wanted to see me.

“I saw him, we had a discussion, he and his wife, subsequently to that they announced that they would have the convention (in July).”

Yesterday Mr Ingraham again stressed that he has no plans to leave retirement and pledged his full support to the leadership team that emerges from the FNM’s convention this week. He said he hopes the dissenting MPs as well as Dr Minnis accept the results of the convention.

Sadly, I think that no matter who wins the party is forever fractured.

Comrades! The Red Movement's July 27-29, 2016 leadership's slogan is quite simple. Papa thinks it's still all about him, stupid? If you're one of the 410 Comrade red shirts in voting attendance at the Meliá Nassau Beach over the three convention days and you haven't already by now drawn your own conclusion about Papa Hubert's intentions to meddle in the party's convention affairs, maybe you should read, reread and listen to what the former prime minister who supposedly was thought to be have been permanently forced into retirement to Copper's Town, has had to say over the last 48 hours? You really need ask yourself why it's your responsibility as a voting delegate to read and listen for your own self the nuclear things this man is instigating to derail the party's leadership? So "distressed" was Papa Hubert, that on that exact same PLP victory night he ran away from his new obligations as official opposition leader?
Him has a serious problem and it's him!
Remember, once before he said to his former law partner, If "I" can't win the election, you win it! And guess what. The PLP did win and won the whole damn government they sure as hell did and won handsomely? It wasn't Papa's turn back in 2012 and it's not his turn July 27-29, 2016 to be meddling in the party's leadership decision making business.

you truly are sick if you cant see how incompetent this lousy PLP government is. This country was far better off under Ingraham. You are just a blind PLP supporter burying your head in the sand or a crony being greased

you cant be serious when the PLP is using Pindlings name from the grave but the Fnm cant take advice from their former leader? plps are so full of shit

so sick for you PLPs to blame Mr Ingraham for the FNM while the PLP runs the country into the ground honestly if the PLP supporters would open their eyes they would never support the worst party ever in this country. Millions in vat yet the highest debt ever. Bamsi burned down, no one arrested. Urban renewal a failure and monies stolen but no one can say where it went. The sale of BEC which is now worse than it was before. Do we even know who owns BEC The country has become a gambling slum with number houses every 3 buildings. Millions spent on aa failing carnival. The highest crime rate ever and the highest unemployment. Bahamar failed under the PLP. I hardly think the PLP can attack the best Prime MInister we ever had. If oonly they held their PLP mps to the same standard they may not be still with outside toilets and no running water.

sad the PLP is running the country to the ground with highest unemployment rate highest crime rate taxing us to death while spending no money to improve this country and the PLP troll supporters have the nerve to criticize Mr Ingraham.

Of course! That goes without saying. And look at the "timing" of the interview. A tell-all interview about the state of affairs which hints at Minnis' incompetence just before the convention and delegates vote.

No Comrade Banker, it's no damn joke when a former three-term prime minister, a day before the political party he was given the high privilege to have lead, is to hold it's already heated convention - he decides to be acting like a child playing with deadly red strike matches. This man should be ordered barred by special resolution by the 410 voting delegates voting on the convention floor - from even stepping onto the Meliá Nassau Beach property anytime during July 27-29, 2016.
I think by now it should be clear to the 410 voting delegates that Papa Hubert is no friend to the red movement he lead as PM for three terms in government.

The Bahamian people have been played as fools for far too long by Ingraham and Christie alike. Both have driven our country to the brink as a result of their corruption, greed and incompetence, all the while feathering their own nests and the nests of their family members and elitist cronies.

Perhaps the FNM Papa should stop giving Roc with Doc advise. after all he did say. "The Ingraham error is over" What about that FNM Papa does not understand.. In my view they are all alike a sorry bunch

Birdie, you have no view as you are dead set PLP. If YOU where honest you would admit your PLP's shortcomings. Therefore what you have to say is irrelevant and as always unhelpful in finding a solution to our country's ill's.

Ingraham: Should Be In Total Distress At State Of The Country After His 3 Terms As PM!

It was Ingraham who as PM had the Bahamas abandon Taiwan for mainland China many years ago against the wishes of the U.S. Yes, it was Ingraham who planted the mainland China seed in our country and look what it has grown into today with devastating consequences for our economy. Even the long established Chinese owned port and transshipment facilities in Grand Bahama have never produced the desired wealth effect for the Bahamas. Mainland China gave us a sports stadium to get their foot in the door (as they have done in many African nations) and have been stripping our economy of key strategic assets ever since. Our corrupt politicians and their cronies are the only ones being throne a bone by the mainland Chinese for permitting our country to be raped pillaged and plundered!