Moss: ‘No’ campaign should have been funded 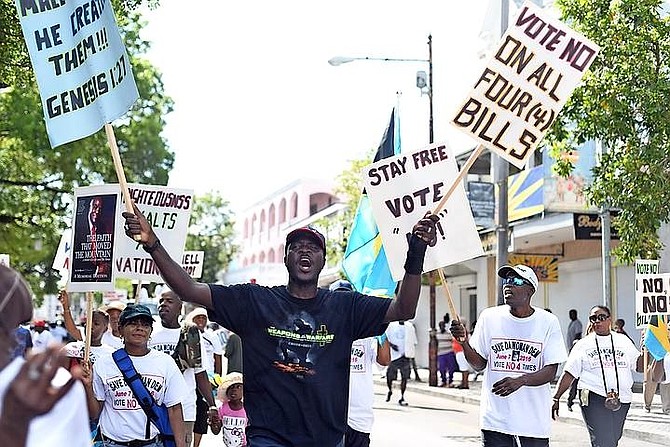 LOCAL pastor Rev CB Moss said he does not support any of the constitutional referendum bills, adding his voice to the momentum behind the vote ‘no’ campaign.

In a recent statement, Rev Moss also said he rejects the idea that the bills are “gender equality bills,” saying the first three proposed amendments are citizenship matters and the fourth bill “is about sex.”

“Citizenship is the greatest gift that a country can bestow upon an individual and it must not be awarded casually. Citizenship must be strongly desired by the applicant, and well deserved, based upon loyalty, commitment, and contribution to The Bahamas,” he said.

Rev Moss said he does not support constitutional entitlements to citizenship through marriage or dual citizenships.

“The subject of Bahamian citizenship, who should get it and under what conditions, should be a topic of national discussion, including the thousands of persons born in The Bahamas since 1973 to non-Bahamian parents,” he said.

He also thinks the fourth bill would provide a back door to same sex-marriages, even though the government has repeatedly said this concern is baseless.

“From all that I have read and all that I have heard, there is no doubt in my mind that the passage of bill number four will provide the basis for a successful legal challenge to the current marriage law,” he said.

Rev Moss criticised the government for “forcing” the ‘yes’ message on Bahamians while excluding supporters of a ‘no’ vote.

“Public funding should have been made available to those opposed to the government’s position as well as supporters of the ‘yes’ position,” he said.

Responding to claims that ordinary legislation is sufficient to address current inequities in citizenship matters, Mrs Maynard-Gibson, QC, said that legislation cannot offer the same guarantees that would be entrenched in constitutional provisions.

She further urged citizens to be cautious about misinformation and legal distortions in the days leading up to the June 7 vote.

She said, in a press statement, that this is the time for sober and dispassionate reflection about what Bahamians want the Constitution to reflect regarding the ability of men and women to enjoy equal rights under the law.

This comes after former Court of Appeal President Dame Joan Sawyer stressed that the government could make the necessary changes proposed by the referendum without a public vote.

Dame Joan was also adamant that the Christie administration is using the upcoming gender equality vote as a “ruse” to implement lesbian, gay, bisexual and transgender rights in order to conform to international human rights policies.

“There has been a suggestion that the constitutional referendum is not necessary, and that ordinary legislation is sufficient to address current inequities in our country between men and women with respect to citizenship and the right not to be discriminated against. That suggestion is incorrect,” Mrs Maynard-Gibson said.

“It is important to understand the facts and the law. The Constitution is the supreme law of the land. It takes precedence over any other law. The provisions which treat men and women differently with respect to citizenship rights and freedom from discrimination are entrenched provisions in our Constitution. They can only be changed by a constitutional referendum.

“Put another way, if we want our sons and daughters to be guaranteed equal rights under the law with respect to citizenship and the right not to be discriminated against, those rights must be written into the Constitution and entrenched at the highest levels. Ordinary legislation can be passed by Parliament, and it can also be changed, as it often is, by a simple majority in Parliament. Ordinary legislation cannot offer the same guarantees as entrenched constitutional provisions.”

She added: “It is the nature of a Constitution to reflect and protect a nation’s most fundamental values. That is why our Constitution says that the state may never treat citizens differently because of the colour of their skin, or because of their religion, or their political views.

“The proposed amendments to the Constitution were drafted after an extraordinary period of consultation with legal and other experts. The lawyers who drafted them did so with great precision, and with the benefit of hindsight from the earlier process. They did so in a way that would ensure that men and women have equal rights under the law as citizens of the Bahamas. They also did so in a way that provides new constitutional protections for our law that says marriage must be between a man and a woman. Hundreds of information sessions have been held across The Bahamas so that Bahamians can see for themselves the text of the Constitution and the proposed changes.”

For the record, I will be voting a resounding "No!" to all four of the bills in tomorrow's referendum. Like most Bahamians I am only intolerant of others who seek to impinge on my rights, my freedoms and my way of life as a Bahamian. This bucket obviously does not include the vast majority of Bahamian men or Bahamian women, but it does include the many thousands of foreigners who are willing to sell their loyalty to the PLP (or FNM for that matter) in exchange for our government (with its hidden agenda) granting them Bahamian citizenship or permanent resident status. And this bucket certainly does include the very loud few in the global LGBT movement who seek to impose their way of life on others under the pretense of the rest of us (the 98+% of us) discriminating against them. The vast majority of Bahamians (both men and women) should not have to give up any of their rights, freedoms and beliefs, nor compromise in any way their way of life, simply because a small few in our society falsely accuse them of being somehow discriminatory. I, along with the other 98+% of Bahamians, have rights too!

Can you interpret that please.

Have anyone notice that the present BAR association president have yet to give any support on of any of the bills and he is one of the only high powered person holding a very high seat who have yet to dismissed the former court of appeal judge comments, why havent he showed any support on any of the bills yet.....mmmmmm...maybe he is being cautious on voicing his opinion due to these bills being made so political and bias

Why he didn't ask Nygard who visited his church?