Cheers and hymns for ‘no’ campaigners 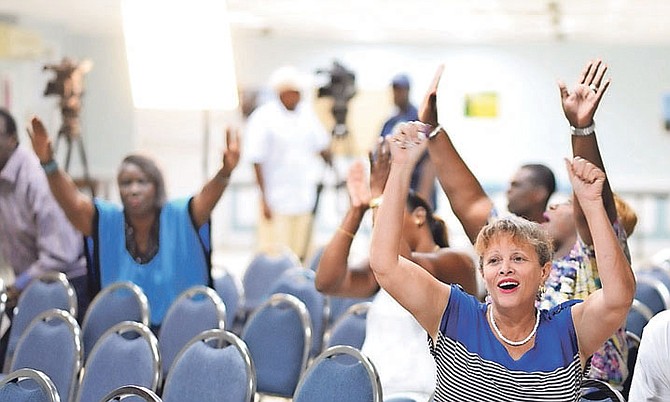 MEMBERS of the Save Our Bahamas campaign cheered and sang hymns at Grace Community Church last night when the constitutional referendum’s results trickled in and indicated a large victory for their side.

All evening they expressed little doubt that a ‘no’ vote would succeed, saying they fulfilled their roles of “gatekeeper” by thwarting attempts to disrupt the status quo.

An hour before midnight, Lyall Bethel, senior pastor of Grace Community Church, urged the supporters not to “gloat,” expressing regret at how contentious the debate over the referendum had been.

“We have to lead the process toward healing,” he said, adding that Bahamians were dismayed by accusations that some people engaged in “unchristian-like” behaviour for their stance against the bills.

However, despite the conciliatory note, it was clear that among many of the ‘no’ supporters in the room, lingering feelings of animosity existed over the government’s failure to give them access to public funds for their campaign and over the “insults” thrown their way.

“We have God on our side,” said one woman.

She identified herself only as Linda because “the government does be vindictive.”

Echoing a sentiment expressed by others, she added: “I’m offended that (Prime Minister Perry Christie) took my money and used it against me.”

She said Mr Christie and some other proponents of the bills owe people like her an apology for “insulting” them. “As a Christian voting in this country, we have just as much rights as everyone else,” she said. “Perry Christie and the vote ‘yes’ group needs to apologise to us for all the names they called us. I think every Christian in this country should be offended by the things they said. They said they were presenting an honest voting process and referendum, but the fact is they only presented one half of the argument. No government that does not present both sides is in favour of giving the people the correct information.”

Darlene Saunders said she knew the referendum would fail after she conducted an informal survey of her Atlantis coworkers, which indicated that only 15 per cent of them supported the bills – the rest said they would vote ‘no.’

“One of the main things that offended me was fact that the government supported the ‘yes’ campaign and gave nothing to the vote ‘no’ campaign,” she said. “It’s dictatorship. We’re talking about equal rights aren’t we? So you would want the government to fund both sides.”

Asked if she felt any sympathy for those who will be disfranchised by the results due to inequality in the Constitution, she rationalised her decision to vote ‘no’ by saying if passed, the bills would not have been retroactive.

“The citizenship bills would’ve had to be retroactive to make a difference,” she said.

She described the government as a particularly “poor messenger” for change, pointing to its decision to go against the gambling referendum of 2013 as evidence that it cannot be trusted.

Although the referendum has been touted as one that would enhance the rights of women, most of the people at the Save Our Bahamas campaign watch party were women and they were the ones who led the crowd of about 50 people in a rendition of “What a Mighty God we Serve” after PLP Chairman Bradley Roberts released a statement conceding the referendum’s failure.

“It doesn’t really matter whether I’m a woman or not,” said Theresa Knowles. “My stand is I stand for God and firstly I stand for truth and Jesus, so no matter what I may be my beliefs must line up to God’s words. Truth first over anything else.”

As Bahamians assess in the coming days why the ‘yes’ campaign appeared to have lost by such a large margin, Bishop Walter Hanchell, a vocal opponent of the bills, gave his diagnosis, saying: “Bahamians never asked for this referendum.”

“This is an agenda the government gave the people, nobody asked for it. We believe God has given us this victory for the Bible still says righteous exalts the nation.”

Despite the fierce debate in the lead-up to the referendum, a sense of inevitability surrounding the results filled the room.

By the end, Mr Bethel said the referendum was “unnecessary.”

As for those that will continue to be disfranchised by the Constitution, he said parliamentarians should make legislative changes rather than bring another referendum to address the issues.

Bishop Hanchell said the vote ‘no’ campaign will have a press conference today to discuss the results of the referendum.

Among other things, Mr Bethel is expected to call on the government to give an account of how public funds were spent to aid the YES Bahamas campaign.

Five million plus dollars ($5,000,000+) of our hard earned taxpayer dollars flushed down the toilet by the corrupt Christie-led PLP government on their misguided and rightfully failed attempt to buy votes in exchange for Bahamian citizenship and/or pandering to the agenda of the global LGBT movement! The horridly dilapidated public school I voted at sure could have used that money for desperately needed renovations and repair work. My wife actually had tears come to her eyes when she realized that all of the school's water fountains and water coolers were non-functioning and that the restrooms were in a dreadful state, not fit for human use by any standard. Yet the corrupt Christie-led PLP government would have us believe that they care about the rights of men and women (and those somewhere between men and women) being equal. Well, what about the rights of our young children who have to attend these deplorable public schools that are not fit for most animals, let alone humans?! Small wonder our children are receiving a D minus education....it is almost impossible for even the brightest amongst our young to learn anything under such horrid conditions. And no doubt the teachers at these unkept schools are from the bottom of the barrel....who else would subject themselves to working under such squalid conditions. But elitist Christie and his privileged political friends and business cronies (like Sharon Wilson and her husband, Sir Snake) certainly don't give two hoots about the welfare of our young children and the quality of their education .....they only care about themselves....and bills 1 thru 4 were only ever about themselves in terms of their hidden agenda. Thank heavens the vast majority of Bahamians were not fooled and overwhelmingly voted "No" to all four of the bills. Christie and his merry band of bandits are corrupt, power hungry, financially greedy and completely lacking in heart or soul. I truly feel for the very young in our country today, especially the 500+ recent COB graduates.

These people really give Christians a bad name. Even as I voted no to three of the bills I do know that God is a just God and he is no respect of person all are equal in his eyes. In my opinion the Immigration system in the Bahamas is in one great mess and there is no reason to add to the mess. As for Pastor Bethel and the others they should try to save some souls for Christ. there should be no rejoycing in this matter. All of the Pastors will do well to stop playing politics. The God I serve love the Gay people as much as he loves the Pastors, Because all have fallen short and are in need of God's mercy.

birdie, you and God are surely strangers !

And all of us don't blame God for wanting to keep it that way!

Wonder if there should be a referendum on the Separatation of Church and State? (Or is it State and Church?)