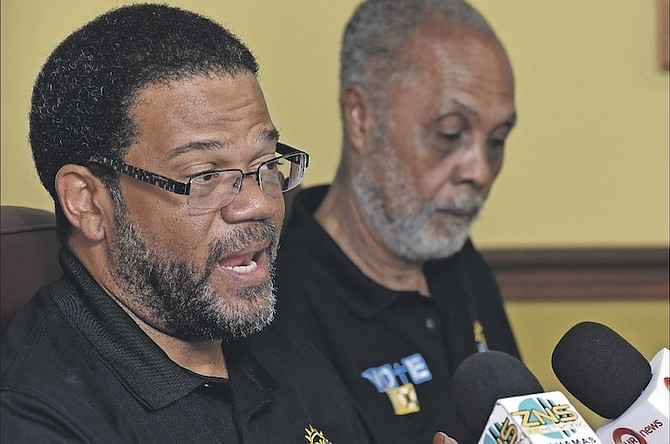 Pastor Lyall Bethel speaking as the Vote No campaign held a press conference to discuss the referendum outcome.

THE Save Our Bahamas Committee - the group that successfully opposed Tuesday’s gender equality referendum - yesterday likened their efforts to the biblical story of David versus Goliath, contending that God used their small effort to divert the “global homosexual agenda”.

Speaking during what the group labelled a “victory” press conference, the committee publicly thanked God for directing its steps the last two months and the steps of the electorate in delivering a resounding “no” vote in the June 7 referendum.

Mario Moxey, senior pastor of Bahamas Harvest Church, characterised the success of the organisation’s campaign as an incredible victory for the people of the Bahamas.

Pastor Moxey continued: “Just like the biblical story of David and Goliath, God used a slingshot to take down a giant. God used the little that we had to bring down the global homosexual agenda from advancing in our country.”

In mid-April, the group launched its vote “no” campaign on the premise that bill four would open the door to same-sex marriage. The pastors implored voters to reject the fourth bill and vote their conscience on the bills one, two and three.

However, the group’s stance on the referendum and some of the promotional material used to push for a “no” vote suggested the pastors wanted the electorate to reject all four questions on the ballot.

Responding to questions on the apparent change in the group’s overall message, Pastor Moxey maintained that the group’s message remained constant from start to finish.

“From the time we started our campaign to the night of the referendum I publicly stated our position. Our position has never changed. Our position has always been to vote your conscience on bills one, two and three; and vote ‘no’ on bill four because we thought it opened the door to same-sex marriage,” he said.

“That has never changed, and we have remained committed to that particular message.”

Bill four, regarded as the most controversial, sought to prevent discrimination of any type based on sex - being defined as being male or female. This was to be inserted in Article 26 of the Constitution.

Some observers have said with the failure of question four, the door is now open for a challenge to the ban on same-sex marriages because discrimination based on sex is not allowed under Article 15 of the Constitution, but the word has been left undefined.

“In Chapter three there are articles, 15 - 31. Article 15 is considered the preamble to that particular Chapter and it speaks of the freedoms and rights of an individual, however, in Article 15 it expresses that if you really want to see how these rights are conveyed, then you need to see Article 15-31.”

“So sex is included in Article 15 but it doesn’t have any teeth, this is based on a ruling by the Privy Council that stated that Article 15 was only a preamble to those particular article,” he reasoned.

“Hence the reason it was so necessary to insert the word in Article 26 in order to give it teeth. So the argument that inserting sex in the Constitution and defining it between a male and a female is good law, we insert that it is bad law.”

Lyall Bethel, pastor of Grace Community Church, addressing the international ramifications of the “no” vote to bill four said the country has always “called out to God in the midst of great trials and God is delivered.”

Pastor Bethel said Bahamians made it clear who they are and what they stand for.

“I don’t think we want to send any kind of message that we are going to be kow-towing to international agendas to have absolutely no regard for our social morals to what we believe,” he said. “And we believe in traditional marriage. We believe that there is nothing sinister or evil about male headship, yes we acknowledge that there are some men who could be doing better jobs as husbands.

“But we are not prepared to say we are going to throw Christianity out to accommodate select groupings of individuals who feel that their rights are being trampled, when truth of the matter is, they have the same rights we all have.”

“We are not prepared to give special rights, we all enjoy the same rights.”

Bill four was rejected by the largest percentage of voters in Tuesday’s referendum.

Bills one, two and three dealt with issues of citizenship.

Save Our Bahamas asserted that the failure of those bills hinged on the failures of the government, the YES Bahamas campaign and the Constitutional Commission’s Educational Committee.

Initially, Save Our Bahamas wrote the government requesting $100,000 in funding considering that the government had financed the YES Bahamas campaign.

That request was not approved, with the government sustaining that it wanted to stand on the “right side of history, morality and equality.”

Pastor Bethel on Tuesday said the group would demand that the government give a detailed account of how the money given to the ‘yes’ campaign was spent.

Moreover, yesterday, Pastor Moxey implied that the group was open to the idea of being reimbursed in part for the money poured into their vote ‘no’ campaign.

“At this point in time the government has yet to formally respond to our request, so as long as there is life there is hope. Maybe the government will decide that they would pitch in, who knows what could happen. If they certainly provide assistance we won’t reject it,” he said.

The group will hold its final “Prayer in the Square” Monday, June 13, at 7pm.

Comrades, can you name the top 10 most 'dumbed down pulpits' that Jesus would most likes to preach from on a Nassau Town's Sunday morning?
Hallelujah, Jesus IS Coming To A Pulpit Near You!

Are these guys serious? Lord, have mercy upon these the Pharisees of our day. Protect us from their good intentions.

Comrades wasn't that long back right in in Bahamaland when the nuns at the Catholic schools declared left-handed people to be servants of the Devil?
Run into one them tough sisters and you were subject getting a smacker to the back ya head that was known alter one's racial complexion, for not being swift enough in switching over to your right hand.
Not that the Methodists Queen College School, wouldn't give you the strap.

I do not know what these pastors are talking about. Persons voted what they wanted to vote. The Pastors had nothing to do with it. Now if these same Pastors could do something about crime in the Bahamas. that will really mean something. The persons who are gay are still Gay, they have not gone any where . the same as the thieves, persons who cheat on their husbands and wives . and those who have children out of wed lock.

Comrades if you really want get know a preachman's true motivations, just you ask to see the church's rosters, then check the political stripes of the people that they favour most to speak to their congregations from their Sunday morning pulpits?
Bingo!