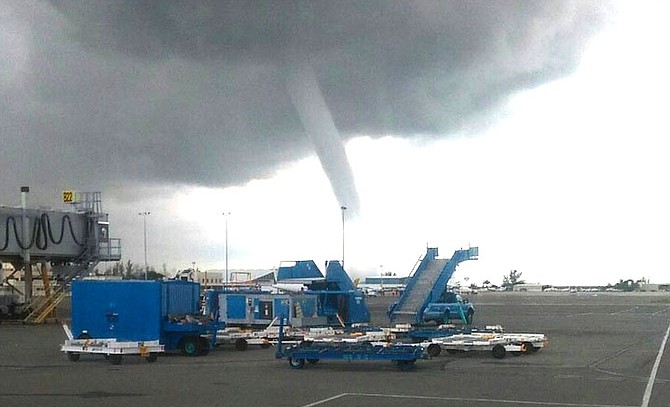 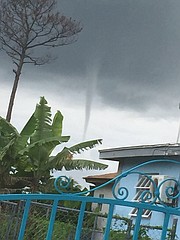 Photos reportedly of this afternoon's waterspouts.

A SEVERE afternoon thunderstorm spawned three waterspouts over Lake Killarney and dropped several inches of rain in the capital, according to Senior Meteorological Officer Kaylinda Forbes.

A severe thunderstorm warning was in effect Wednesday afternoon for Andros, New Providence and their adjacent waters.

According to a release from the Met Office at 4.50pm, radar and satellite imagery showed clusters of severe thunderstorms affecting New Providence and Andros and additionally waterspouts were observed over Lake Killarney.

Some of the thunderstorms will be severe at times causing strong gusty winds, dangerous lightening, heavy downpours, hail, waterspouts or tornadic activity.

Residents are advised not to seek shelter under trees or in water, as they can become lightning conductors.

Mrs Forbes estimated that by 7pm, the bad weather would dissipate.

“The cluster is moving pretty fast so I would say in about an hour it will be out of the way and we will get a little break,” she said on Wednesday afternoon.

“However, there is a whole lot of activity occurring south of Andros and we will have to monitor them to see if another cluster will form. If that happens we will send another warning.”