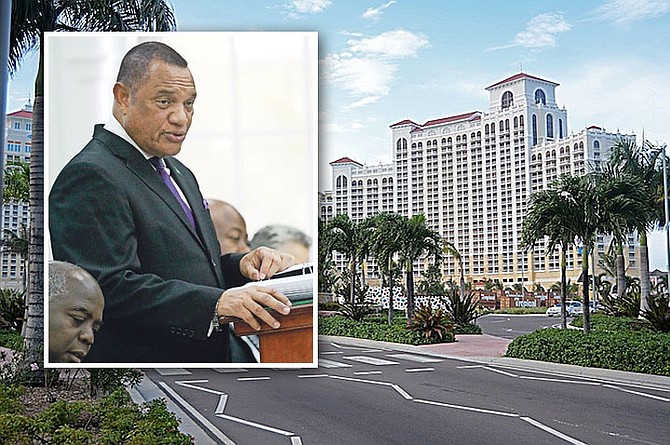 PRIME Minister Perry Christie said yesterday he anticipates that the government will be invited at some point to begin consideration of what it has to do to facilitate construction permits and “whatever else” China Construction America (CCA) needs in place to complete the unopened $3.5bn Baha Mar resort.

However, he did not go into detail over what concessions would be under consideration.

Until this takes place, Mr Christie said that his administration is in a “wait position” as Baha Mar’s receiver managers continue discussions with CCA and the Export Import Bank of China.

His comments come amid allegations that the government colluded with the Chinese to shun developer Sarkis Izmirlian from involvement with the shuttered resort. It was also reported that Chinese investors have asked for economic citizenships as a concession to restart construction and to complete Baha Mar. Mr Christie has vehemently denied that any citizenships were granted, however he has been quiet over any other demands for concessions.

“Very simply, officials of the government have been in touch with all of the parties,” the prime minister said when he was asked to give an update on the progress of negotiations, adding that a conference call between the EXIM Bank, the receiver managers and CCA had taken place this weekend.

He continued: “The matter is in the hands now of the receiver managers (and) Ray Winder, a Bahamian, is a part of that team. They are in final negotiations with the contracting company with a view to settling the way forward.

“The government will be invited in some stage to begin consideration of what it has to do to facilitate construction permits and whatever else the contractor needs in place. Under the Hotel Encouragement Act there are certain concessions they can get so we are in the process of waiting really for a communication from the receiver managers who have the responsibility and who will advise us as to where they are and what they would wish us now to deal with.”

Last Wednesday in the House of Assembly, Mr Christie revealed that two firms, one with ties to Bahamian investors, were shortlisted as the receivers of the project moved closer to deciding which entity will acquire the West Bay Street development.

However, he said the final decision was solely at the discretion of the receiver managers. At the time Mr Christie confirmed they were in Beijing, China negotiating a contract to remobilise and complete the project as soon as possible.

Mr Christie said China State Construction Engineering Corporation (CSCEC) along with CCA, its subsidiary, were also participating in the talks.

He did not name the two shortlisted groups, but said neither involved Mr Izmirlian. He added that the government of the Bahamas was not privy to the content of the ongoing discussions in China.

Given the immense speculation regarding the government’s involvement in Baha Mar’s current state, Mr Christie also last week read into the record of the lower chamber legal advice the government received from its international lawyers regarding Mr Izmirlian’s Chapter 11 bankruptcy filing one year ago.

He was referring to advice from US law firm Hogan Lovells and UK firm Charles Russell Speechlys LL.

The UK based attorneys pointed out that Mr Izmirlian was without funds and his promises of funding were without foundation.

Hogan Lovells added that the filings enabled the developer to temporarily retain control of Baha Mar rather than relinquishing control to independent liquidators or receivers.

The firm argued that had the Chapter 11 case continued, the filings would have enabled the Baha Mar debtors to assume or reject continuing contracts, deciding which to retain and which to discard generally leaving the counter parties to discarded contracts with nothing more than unsecured damage claims.

This has drawn criticism from both Mr Izmirlian and Long Island MP Loretta Butler Turner.

The developer, BMD Holdings, responded last week saying it was “astounding” that nearly one year after engaging with CCA and the EXIM Bank in “sabotaging” the resort’s Chapter 11 case in the United States, the Christie administration suddenly paid two law firms to craft hypothetical justifications for the government’s “ready-fire-aim” actions concerning the $3.5bn resort.

Meanwhile Mrs Butler-Turner has accused Mr Christie of attempting to remove himself from the “enormous disaster” his administration created over Baha Mar and has castigated the government for making decisions based on certain specific interests.

The former FNM deputy leader said the prime minister was locked in a desperate effort to be re-elected and therefore resorted to telling a “selective” history of his government’s colossal mistake in pushing Baha Mar into liquidation.

She maintained that despite the Progressive Liberal Party’s claims that the governing party was the defender of this country’s sovereignty, government’s legal manoeuvring did greater harm to this very element.

Today marks one year since Baha Mar filed for bankruptcy protection in the United States.

I remember Perry saying Bahamar would be open by Xmas.....problem is he didn't say which Xmas.what a total disgrace.colluding with the Chinese to steal this property. now even the Chinese are not paying attention to Perry Christie .This PM is a stranger to the truth.the bahamian people don't believe nothing he says

Christie is a corrupt SOB to the core who is now "playing" all of us while he, Maynard-Gibson, Sir Snake, Baltron "Bagman" Bethel and others of their crooked ilk sell out the Bahamian people to the Chinese!

PM Christie sooner or later will be forced to come the realization that he is a total, abysmal failure, and has been so throughout the majority of his 40+ year political carrier!

For an individual that stands around talking about "legacy", what accomplishments can Christie refer to of any significance? A "legacy" is not built by one act!

Despite innumerable warnings that the Chinese were obviously working to "Shanghai" him, Christie still blindly blundered hook, line and sinker into their trap. Now finding himself hard against the wall with no way out, other than accepting a very bad deal against the countries best interest.

Better for Christie to resign as PM in Bahamas national interest, allow others to block the Chinese unscrupulous tactics, and cause Sarkis to take his rightful place at the helm of Baha Mar.

NOBODY trust desperate PM Christie, and NOBODY trust the Chinese government! We must rid ourselves of them both at whatever cost!!

Christie will never resign but he needs to be retired in the National interest.

And after Christie's gone the Bahamian people need to claw back from him and his equally corrupt cohorts all that they have stolen from us by hook or crook. Then we need to repeal all of the legislation that was wrongfully/illegally passed in an effort to legalize the criminal activities of the numbers' bosses like Craig Flowers and Sebas Bastain against the wishes of the vast majority of Bahamians and go after their illegitimately gained wealth.

he loves to hear himself talk!

And his voice lulls his lamed brain to sleep while his mouth continues to yap yap on.