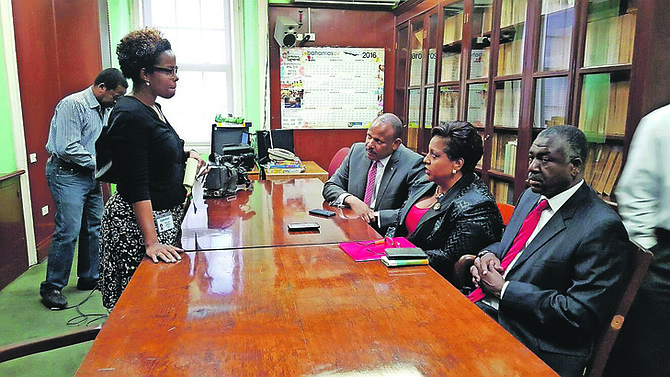 LONG Island MP Loretta Butler-Turner has declared that she and running mate Senator Dr Duane Sands will make the “strongest team” to not only contest the top two leadership posts of the FNM, but to turn the country around.

While formally announcing her intent to challenge FNM Leader Dr Hubert Minnis when the organisation convenes its three-day convention, Mrs Butler-Turner said the party, now more than ever, needs to be driven by leaders and doers.

She appeared confident and measured in her responses, maintaining that for the FNM, which is seemingly fractured and wrought with infighting, she and Dr Sands are “healers” with the ability to unify the opposition party.

She said it is important that as the party comes out of a convention that the two are able to embrace fellow FNMs who might be hurting over the results and to stress that the matter is bigger than the election of party officials, but it is one for this country.

Mrs Butler-Turner and Dr Sands will face off against Dr Minnis and FNM Deputy Leader Peter Turnquest during the convention. To celebrate the official launch of this campaign and make public their plan for national development, the duo called on all Bahamians to join them at Rawson Square on Wednesday, July 6.

For his part, Dr Sands said given his 22 years of experience in healthcare, he would be a very capable complement to Mrs Butler-Turner.

It was speculated that Mr Ingraham endorsed Dr Sands when he attended the swearing-in ceremony for the surgeon and lawyer Monique Gomez to the Senate last week.

“Now is the time for wise and competent Bahamians of the highest moral and ethical calibre to come together for the good of one country, one people, one future,” Mrs Butler-Turner said during a press conference in the Minority Room of the House of Assembly yesterday. She was also supported by her husband, Edward Turner.

“Even as I ask this of you, I commit myself to leading by example. It is in that capacity that I am here to announce my candidacy for leader of the Free National Movement.

“And it is in this spirit of service that I will devote my energy and my life to this campaign and to turning our country around. I cannot do this alone, however. I am pleased to stand with Senator Dr Duane Sands, who has joined me in this fight.”

Responding to questions regarding her qualifications to lead, Mrs Butler-Turner said she and Dr Sands were capable leaders and Bahamian patriots.

“I believe that what we need in this country is a turn around, we need a new direction. I am a wife. I am a mother. I am a servant, but most importantly I am a Bahamian.

“I hear the cries of Bahamian mothers. I can empathise with that. I hear the cries of our children. I know what they mean. As a wife I know what it is to take care and nurture our families and so I believe in addition to my experience politically that brings a whole new dimension to the leadership in our country today.”

Dr Sands added: “The last 22 years of my professional life in this country have been spent on the battle ground of healthcare where people are at their worst, their weakest, their most vulnerable (and) their most frightened. And so to say that I have had a crash course in understanding the things that concern Bahamians is an understatement.

“In particular I have been on the battle front of violence and trauma that is where I have spent the last 22 years and so I believe that I can be a very capable complement to Mrs Butler-Turner.”

And despite having already lost to Dr Minnis in the 2014 convention, Mrs Butler-Turner said through that experience both she and Dr Sands have grown, transitioned and developed. She said there are very valuable lessons to be learned whenever one is able to walk away from a loss and build on that experience.

The leadership battle comes at a delicate time for the FNM.

The party’s Central Council voted to have a July convention after six parliamentarians, including Mrs Butler-Turner, threatened to seek Dr Minnis’ removal as leader of the Official Opposition in the House of Assembly.

Dr Minnis’ tenure as leader has been defined by intra-party friction, creating fractures in the party.

Nonetheless, when he was challenged in 2014, he defeated Mrs Butler-Turner by more than double her number of votes.

Dr Sands also ran for the deputy leader post in 2014 and lost that bid.

On June 19, he announced that he and Mrs Butler-Turner would contest the top two party posts, however until yesterday, the Long Island MP has been quiet on the matter.

The announcement triggered a direct response from Dr Minnis, who usually shies away from publicly speaking of party matters.

Dr Minnis told reporters last week that he has no doubt he will remain the FNM’s chief.

And while making his contribution to the 2016/2017 budget debate, Dr Minnis was resolute as he addressed issues within his party, saying: “We are now preparing for a convention and I will enter as leader and I will emerge as leader of the Free National Movement.

interesting BODY LANGUAGES HERE. . .DS looks in charge of the process (tensed and forward leaning as leader to make sure everybody carry out their assigned roles), LBT looks forced and unsure of herself (the victim here) . . . and Mr. LBT. . .don't have a clue. . .why was he there anyhow. . .the only support for LBT (she feel sorry for herself and she needs her trusted support close by). . .again it looks like she is playing the victim. . .she projects that she feels alone. . .conversely. . .doc looks like he is confident and in charge!

Something is amiss here people. . .I bet this is not the final convention team to run against doc roc!! I highly suspect that the final team is BS and Papa! This team is projecting disinterest, coercion and manipulation. . .and doc Sands projects the puppet master role. . . this ger be long! Lol! Maybe there is something to LBT not coming forth with the announcement and the Puppet master forcefully "outing" her. . .then Papa only endorsing him in public. . .not LBT. . .at the same time Papa telling the press that he will make a statement when he has one!! Think now. . .BS all of sudden becomes the FNM's official "opposition to doc" in public! The Papa who was "out of sight" for four years all of a sudden is everywhere. . .with his old crew!

Wow. . .it looks like LBT got swing. . .she is possibly put out front to buy Papa and BS time. . .and to save face with the public!! Doc take note. . .someone got a big stick behind their back to "wap" you over ya head at the last minute. . .Lol!!!

She was all over the place "barking" behind doc roc's car. . .now the car stopped. . .they don't know what to do with the car. . .SHE SURE DO LOOK DEFEATED AND ALONE! SHE BELIEVED THAT I was on doc roc side. . .but she will see that when they come to cut her to pieces. . .now that she is the moving car too (dogs will chase her too). . .she will see that I will defend her against unfair snipping as well!

My first advise to her is: "use that independent mind you tend to display". . .because girl they making you look like a "joke". . .preempting your public announcement, placed you in between a "bully looking" doc Sands and you most trusted "protector" at your side. . .the poor man looks confused and out of place! Man I don't like what they doing to you. . .you need to start being ya old self. . .this lil scared chicken-like person they presented to the public een you at all! Somebody mussie need to look for Rollins for you to slap him again. . .oops. . .forgot he is your friend now!! I really don't like to see you like this. . .they setting you up to look lame and incompetent. . .keep ya eyes alert. . .remember that more than your political career is at stake. . .your social credibility is as well. . .you are carrying the flag for Sir Milo B!!! And if you are going to do him proud. . .win. . .lose. . .or draw. . .LET THE REAL LBT STAND UP!

I am sure there will be more shenanigans. But if Minnis is reelected as the FNM leader and Christie returns to lead the PLP- I have to apologize in advance to my parents and grandparents who fought for the right for everyone to vote- cause I can't vote for either one of them. The fact that they can emerge as leader is an indictment of the whole team they have surrounded themselves with.

I can't vote for either one of them.

If The Turner-Sands team loses this bid at leadership of the FNM where will this leave them politically? If Minnis loses then he can either bow out of politics, join another party (preferably the DNA) or sit at the back of the bus and leave the driving to those who think they are better drivers or they know the road better. But as to be expected in politics, this will not be the end of the leadership row and others my seek to wrestle power from Turner-Sands. Just remember election soon come. Silly season is almost upon us.