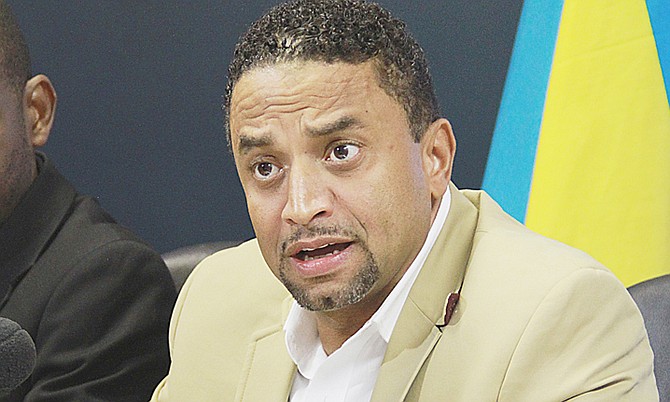 DNA Leader Branville McCartney yesterday criticised the Christie administration for trying to take credit for the proposed gender equality referendum, charging that it was the Progressive Liberal Party’s about face to a constitutional referendum in 2002 that “caused us not to have gender equality for the last 15 plus years”.

Mr McCartney slammed PLP members for saying that they are “championing the cause for gender equality” when in 2002, after voting “yes” to the referendum bills in Parliament, then Opposition Leader and now Prime Minister Perry Christie opted to withdraw his support of the referendum ahead of the vote.

Accusing the government of being “disingenuous” with Bahamians on the matter, Mr McCartney said the credit for the passage of the four Constitutional Amendment Bills and the proposed referendum on gender equality should instead be rightfully given to former Prime Minister Hubert Ingraham, and not Mr Christie.

Mr McCartney also castigated the government for not doing anything to eliminate the “ambiguity” surrounding the fourth Constitutional Amendment Bill, as he said the Democratic National Alliance is still of the view that it will allow for gay marriages in the country.

Mr McCartney also accused the government of “going through the back door” in dealing with the controversy surrounding the fourth bill.

In February 2002, after voting “yes” to the constitutional amendments in the House, The Tribune reported that Mr Christie withdrew his support for amendments to the Constitution and said if the referendum wasn’t cancelled or postponed he would be forced to vote “no.”

At the time, Mr Christie said that since the passage of the constitutional bills, it had become “painfully” apparent from private and public comments that the entire process was even more flawed and divisive than he could have fully appreciated at the time the bills were voted on.

The referendum, which dealt with the issue of gender equality among other things, ultimately failed. The PLP was voted into office after the May 2002 general election. Mr Christie has said he changed his mind on the referendum because the Ingraham administration did not consult with religious leaders before forging ahead.

“This PLP government is disingenuous and they have been disingenuous to the Bahamian people,” Mr McCartney said yesterday. “Because in 2001, early 2002 they voted in favour of gender equality in the House of Assembly. So what happened (Wednesday) happened 15 years ago.

“…Now this PLP is coming and saying that they are championing the cause for gender equality. I cry shame on them quite frankly.”

On the issue of the fourth bill, which aims to eliminate discrimination in the Constitution based on sex - being male or female - Mr McCartney said he does not understand why the government does not add the words “born male” or “born female” to the legislation.

“That’s all they had to do, and that would have cleared the ambiguity. They didn’t do it and it makes me wonder why, because as sure as night follows day, you will see that this part, if this is accepted, will be tested and based on that we will have - and this will go right up to the Privy Council - that we will have same sex marriages in the Bahamas. There’s no ifs, ands or buts about that.”

He added: “Don’t go through the back door when you ought to come through the front door, because that is what I believe the PLP is doing. They’re going through the back door. Because they want to say ‘well we didn’t cause that, the courts made a decision.’ Because that’s what’s going to happen. The courts will make a decision, based on this, if it’s passed through referendum, based on bill four, that there can be same sex marriages in this country. And the PLP will say they wash their hands, it’s not them.”

The four bills, which were passed on Wednesday after a nearly two year delay, will now move on to the Senate for a vote. If passed by three quarters of the Upper Chamber, the bills will pave the way for the long-delayed constitutional referendum.

Who are the special interests ? Name the names.

This could be the beginning of partners, They the reds and the greens seem to be agreeing on many things, truth be told they are one and the same, they all have their Pap's DNA. They were unable to get the yes vote. we shall see if the PLP can secure a Yes vote. Time will tell,

Birdie can't help it. Birdie is a classic PLP supporter. A classic example of how poor our education system is. Birdie is incapable of a thought process as our school system teaches rote. No one is asked to think things through. The PLP relies on the Birdies of life to vote them back in. Birdie who can't think for themselves are the very foundation of the PLP support. You go Birdie, look for your hand out and your subservient existence.

As they say "ignorance is bliss".

Comrade Bran no telling how young are the ages of those reading this hereto blog page, so you best be careful not to be seen to be adopting the R-rated vocabulary of Republican Presidential candidate Donald Trump, when blending together terms like the PLP Cabinet is “painfully” going through the "back door" and how it will allow for "gay" marriages in the Bahamaland.

"Mr McCartney also accused the government of “going through the back door” in dealing with the controversy surrounding the fourth bill" I see what you did, there.