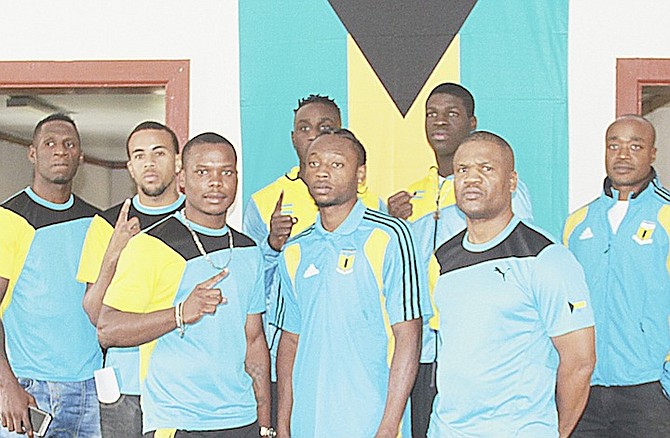 TEAM BAHAMAS: Coached by Andre Seymour, Ronn Rodgers and Valentino Knowles, the team will comprise of Ronald Woodside in the bantamweight, Rashield Williams in the light welterweight, Carl Hield in the welterweight, Israel Johnson in the light-heavyweight, Davon Hamilton in the heavyweight and Keishno Major in the super heavyweight. Photos by Tim Clarke/Tribune Staff

The Amateur Boxing Association of the Bahamas will be sending off a six-member team today to Buenos Aires, Argentina, to compete in the first round of the qualifications for the 2016 Olympic Games in Rio de Janeiro, Brazil.

On Monday as the team was introduced to the media, they got an endorsement from Ray Minus Jr and an inspirational address from master motivator Spence Finlayson. The team, sponsored by the federation, the Ministry of Youth, Sports and Culture, Peter Nygard and Island Games, will be in competition through March 20.

Federation president Wellington Miller, flanked by some of his executives during a press conference at the National Boxing Gym in the Baillou Hills Sporting Complex, said the boxers have gone through a vigorous training session with a month-long camp conducted by fitness instructor Natasha Brown at her Ultimate Fitness Center and another month in training in Cuba.

“This is the largest team that we have ever sent off. What that shows is that our programme is growing and our boxers are improving in all ways,” Miller said. “This is a very expensive team for us. We are asking corporate Bahamas to get on board with us for the Olympic Games because if it’s going to cost us some $30,000 for nine people for 11 days, what you think it will cost us to send 50-60 persons for 21 days.”

He noted that the boxers were engaged in some intense training and they are in very good shape and are more than prepared to represent the Bahamas and eventually qualifying for the Olympic Games.

Brown, a former national triple jumper, said it was a pleasure to have had the opportunity to work with the boxers.

“Ultimate Fitness is probably the only facility at this time that can provide housing for our athletes as they prepare for whatever discipline they are trying to qualify for,” said Brown of the facility located on East Bay Street in the former Tropical Shipping building. “I’ve been very fortunate to have partnered with Mr Miller and Mr Valentino Knowles and the boxing team.

“We started last year and I can honestly say that it has been very rewarding. This is the first time that we did it. The athletes stayed on site and they got up very early in the morning and their training started as early as 4:30am and they were able to get their first meal after working out and to be a setting to help them in their workout.”

As training is very important, Brown said she wanted to ensure that when the boxers show up in Argentina, they will be fully prepared and ready to go to war.

Seymour, the head coach of the team, said the competition will be very intense as each boxer in their weight division will have to finish either in the top two or top three in order for them to qualify for the Olympics. If they fail, they will have one other chance later in the year.

“When they step into the ring, they have to work extremely hard,” Seymour said. “The boxers are well trained. They got good sparring in Cuba for a whole month, strength training here with Ms Brown, so they are well trained. My assistant coach Valentino will be dealing with the day-to-day training and my assistant coach Ronn Rodgers will be working along with him. We have a very experienced coaching staff.”

There are two new additions in Israel Johnson and Davon Hamilton to the national boxing team, but Seymour said he’s not concerned about either of them because they both possess a wealth of experience as well as the others, having travelled and competed in the United States and the Caribbean under coach Rodgers.

As a former boxer who had a very successful amateur career before he turned pro only to retire abruptly after he was injured in a drive-by shooting, Knowles said he’s thrilled to be in a position where he can give back to the sport as a coach, having gained some training experience in Budapest, Hungary.

“We were here earlier this year going through our general preparations where we then moved on to Natasha Brown at her facility with Andre Seymour,” Knowles said. “So I have some expectations for the fighters this year. They are well trained and well prepared for the trip.

“Now that I have had a chance to see the inside of coaching, we were able to divide up the training and we are getting ready to make the transition to competition training. So I feel now that now only the boxers are advancing and elevating, but we have the coaches who are also elevating so we are looking for some great results from this team.”

And Rodgers, who was agitating for his boxers out of the Strikers Boxing Club to compete at the international level, said the boxers are prepared to be in a position to compete against semi professional and even professional fighters, if they make it to the Olympics, as now being instituted by the International Boxing Association (IABA).

“Once your training and your preparation is on par as it should be, you should be okay,” he said. “We’ve been training very vigorously. The technical stuff has gone up seven levels. We’ve given them many styles to train from the Russian to the Hispanic to the American.

“We’ve also gotten them in condition that they’ve never been. They are under their competitive weight, which means that they don’t have to struggle to make their weight. They can actually eat and be strong. It should be very good, very exciting.”

As for his two boxers getting a chance to compete at the international level, Rodgers said it’s just the beginning and he’s hoping that wherever necessary, they will be able to make their contribution in filling up all of the 12 spots that are available in the weight classes.

“We have other fighters on stream trying to fill that quota,” he said. “But it’s good that they can go. They’ve been representing the Bahamas at the international level, but this is the highest level that they can go as amateurs, so we are very happy with that.”

Minus Jr said with the majority of the boxers coming out the Champion Boxing Club, he was just delighted to assist in their progress and he’s now eager to come back into the fold and help the association in whatever way he can in the future.

“I want to leave the past in the past.” he said. “I like the way boxing is going. It has a tremendous amount of talent out there and the boxing federation is doing a tremendous job. Everybody wants to become an Olympian and so I’m happy that I can be here today and encourage the boxers and to represent our Olympic Association.”

Before the conference was done, Finlayson entertained the executives and the boxers with his inspirational speech that was based on some famous quotes by boxers and other personalities as well as he drew some attention on some of the greatest upsets in the sport.

If there was one thing that Finlayson left with the boxers is the fact that they are six of many persons who wish that they can wear the Bahamian colours to represent the country at the Olympics. So he advised them to go to Argentina and give it their best shot and if they never give up, they could very well be heading to Rio in August to compete in the Olympic Games.