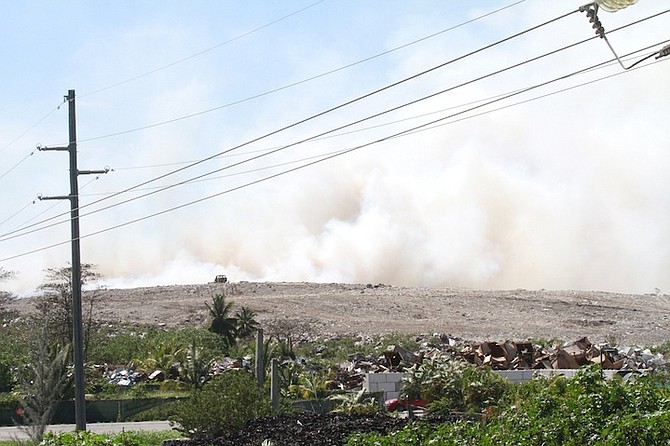 A MASSIVE fire broke out at the Harrold Road Landfill late Monday night, forcing some residents in nearby neighbourhoods to leave their homes and two schools to temporarily close their doors.

This is the second fire at the dumpsite in a week.

The smoke from the blaze caused some residents in Jubilee Gardens and Victoria Gardens to “pack up and leave in the middle of the night”, according to Tall Pines member of Parliament Leslie Miller.

Aquinas College closed early on Tuesday because of the “thick smoke” in the area, according to officials at the school. Classes are expected to resume today.

Renew Bahamas Chief Commercial Officer Michael Cox said he believes the fires, which spread to over 200 feet, were started intentionally, however he has no proof.

“We had a team patrolling last night (Monday), dousing the fire that started last week. At about 10.30pm they took their break and they went back around 11.15pm there was a fire on the road that takes you to the top,” Mr Cox said yesterday.

“The fire spread up the side of the road where waste was being kept. This fire is not connected to the fire from last week – that fire is out. There is no smouldering, no smoke, nothing. I believe this latest fire was an attack; I mean I have no pictures and no proof, but there is no other reason for the fire to have started.”

“At this point, the fire is still burning and the smoke is going over Victoria Gardens. We have eight trucks trying to kill the fire and the density of the smoke. Tonight we are going to run excavators and bull dozers tonight and try to get this under control.”

Residents took to social media to express their “disgust” at the recurring problem.

One Jubilee Gardens woman said: “Beware! (The) dump is on fire, thick billowy smoke, it’s bad. I had to leave home and stay at my mom’s (house). I do not know when I will be going back home. I can’t even get mad anymore, this is expected.”

Another resident said: “Woke up to smoke, again. Is this ever going to stop? Does someone have to die of smoke inhalation before the government does anything about this? I am so frustrated.”

Last night, Renew Bahamas released a statement that said the fire was “successfully contained,” but there were “still two contained hot spots burning on the approach to the final tipping zone area and producing a considerable amount of smoke.”

The statement said Renew Bahamas’ fire response team is continuing to utilise a fleet of heavy equipment, water pumps and cover material to suffocate the fire and mitigate the resulting smoke.

“This containment method approach will continue for at least the remainder of the week. Teams have been set up to work throughout the night, to have this fire extinguished in the quickest possible time,” the company said.

In early 2015, Environment Minister Kenred Dorsett expressed disgust at what he called an “ongoing problem at the landfill and an inability to identify the persons who access it to light the fires.”

Mr Dorsett said the fires would not deter the government “in any way, shape or form with respect to the reforms that we see necessary for landfills not only in New Providence, but all of the Family Islands.”

City dump fires have been a recurrent problem for years.

Renew Bahamas was engaged by the government in 2014 to manage the landfill and help address the matter.

Renew Bahamas has previously said that it believes the fires represent concentrated arson attacks on the site and its facilities.

What am I missing here? Why would people intentionally light it on fire? They're trying to tell uus that people are breaking into the dump just to light it on fire? I doubt it. They're doing it themselves to make more space because the landfill is almost at capacity. Maybe if they actually RECYCLED the waste things would be better. The dump needs to moved. It's too close to residential areas.

I have heard that the government hires private subcontractors to put the fire out, and so that promotes arson. Brother can't get paid unless there is a fire. Wink wink.

Every member of parliament should be made to stand immediately down wind of the dump for a minimum of 3 hours each day that it burns out of control spewing toxic smoke over many unfortunate Bahamians, causing them serious medical conditions and shortening their lives!

Couldn't agree more. The executives of Renew Bahamas should be made to stand down wind with the parliamentarians!

Maybe they should move the dump to Paradise Island and let it burn until those racist foreigners remove the fences that are denying Bahamians access to their own beaches.

Over forty years of independence and we can't even manage a dump!!!!!

You know your system and those who manage it are trash when you cannot even manage a trash heap.

There needs to be fines imposed on ReNew Bahamas. A $100,000 fine every time the dump gets set on fire and a $10,000 fine for each day the dump remains burning. ReNew Bahamas is a business making money and every time the dump, under their management and control is on fire, it causes distress, inconvenience, economic hardship and health problems for thousands of Bahamians.

Have none of you ever taken a chemistry class, never heard of spontaneous combustion? LFG or landfill gas is composed primarily of methane and CO2 the larger part being the highly flammable methane. As long as the decomposition and fermentation of what constitutes a landfill exists the fire problem will coexist so either find a way to tap into and utilize the gas or get rid of the landfill.

i agree - however it is not a landfill :)

It is immaterial whether or not we know what combustible gases garbage produce when it rots. The point of the matter is that RenewBahamas has presented itself as a professional company, experienced in the management and recycling of solid waste. They are he ones who should know that garbage cannot be piled high or buried too deep else combustible gases will build up and eventually catch fire. They are the ones who should know that layers of fill should be sandwiched between layers of garbage to prevent the buildup of gases. They should also be mindful that under certain climatic conditions, like hot summer days, piles of garbage should be hosed with water frequently, again to prevent fires. Isn't that part of the reason they were contracted in the first place? To stop the dump fires from poisoning Bahamians to early graves.

Don't confuse me with your parents when you get to calling people idiots. If you can't get your point across without the name calling then you make it patently whom is the idiot and stupid one. Not to speak about being angry. Now go jump off your bridge to Andros or an even lower place.

Refer to the response above yours again. You don't ever dictate to me.

The PLP is so crooked and thus us what we get. Lyford Cay property is now un the shitter !