Rise in cocaine and rifle seizures 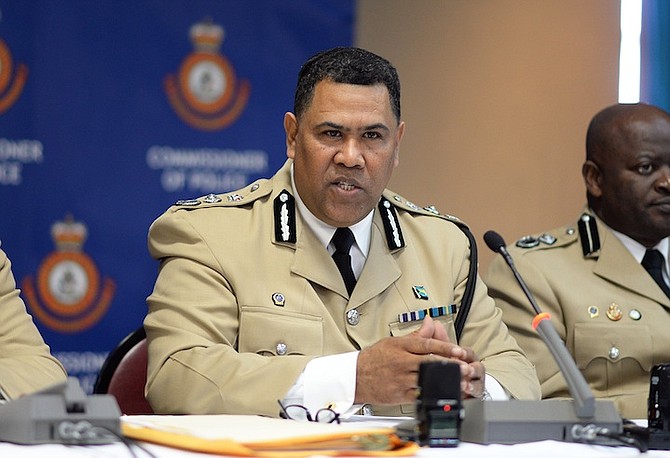 POLICE Commissioner Ellison Greenslade said police are “very concerned” by the amount of cocaine and high-powered rifles that have been seized on the streets of New Providence and Grand Bahama this year.

Mr Greenslade said it is disgraceful that more than 200 weapons have been confiscated so far for the year. He “begged” members of the public to assist police in their investigations and said the Bahamas is only “one person with a little dope in their head” and a high-powered weapon away from making international headlines.

“We are losing too many of our people, especially our young men at the front end of a gun,” he told a press conference yesterday. “We are working our fingers to the bone, working until we are blue in the face, going after the bad people in our communities to get these weapons of death off our streets and I am really bothered that the message doesn’t seem to be getting through to our young people.

“The majority of the guns were seized during stop-and-search operations and from anonymous tips from the public. We have seized predominantly pistols - 9mm, .45 and the .40 variety - but I am nervous about the emergence of assault weapons.

“We have in recent times, in recent months, recovered far too many assault weapons. All it takes is for one deranged person, one person with a little bit of dope in their head, to throw caution to the wind and the Bahamas will be on the world stage. Bahamians are going to have to wake up and recognise this is not a joke. The way we are behaving is disgraceful and we need to check ourselves.”

Mr Greenslade also said drug dealers seem to be getting “bolder and bolder”.

“Drugs are a product of death. Cocaine is now a category that causes us significant concern,” he said.

“We have arrested far too many persons in possession of large quantity of illegal drugs, cocaine, marijuana and other substances only to see those people again being arrested for another major shipment of drugs, hundreds of pounds of drugs.

“Something is wrong with that equation. Just last week, we arrested two men, trying to move cocaine in suitcases through the airport. That is the level of boldness that we are seeing.”

On Sunday officers of the Selective Enforcement Unit along with the Western Division, acting on information, went to the Gladstone Road area and arrested four adult males and one adult female who were found in possession of 73 pounds of marijuana with a street value of $73,000.