‘We Must Reform Campaign Finance’ 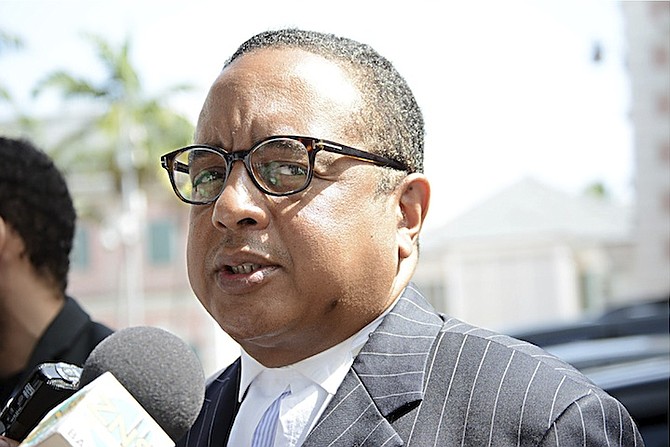 FORMER State Minister for Legal Affairs Damian Gomez said allegations about the relationship between Canadian fashion mogul Peter Nygard and the Progressive Liberal Party are “not a good thing for the country,” adding that he hopes it spurs legislative reforms like the passing of campaign finance laws.

In secret video recordings that are part of a Save the Bays case before the Supreme Court, Mr Nygard alleged in conversations with Livingston “Toggie” Bullard and Wisler “Bobo” Davilma that Prime Minister Perry Christie promised him a lease to build on government land.

In one video, Mr Nygard alleges that he “pissed away” $5m dollars to the Progressive Liberal Party only to be disappointed by “fake promises” from the prime minister.

Mr Gomez said he doesn’t know if this donation allegation is true.

“I’m a member of the PLP,” he said. “From where I stood in the election, I could not believe that they would’ve had those kinds of resources. I know I went to the bank and funded my own campaign. If I knew resources were available that I could’ve accessed, I would’ve done that.”

Mr Gomez has been the most vocal member of the government when it comes to calling for campaign finance legislation, describing it yesterday as “overdue.”

He said “no” when asked if he is aware of any efforts by the government to bring such laws to Parliament, despite Mr Christie’s statements of support for such laws after the last election.

Asked about the perceptions arising from allegations that the PLP received $5 million from Mr Nygard, Mr Gomez said: “The purpose of campaign finance reform is to limit contributions to under $5,000 so no one can actually make such a large donation that one could suspect that they are getting something back from it and that’s the whole point of it.”

An exasperated Marco City MP Greg Moss also weighed in on the issue yesterday, saying the political system of this country is “manifestly corrupt.”

“I have thus far not spoken on the mid-year budget or those allegations because I am convinced that there is a disconnect with this circus show we have in this House and what’s going on in this country,” Mr Moss, who quit the PLP last year, said.

Mr Moss said any government that’s serious about dealing with corruption will pass an “enforceable” Prevention of the Corruption Act and the Freedom of Information Act.

“Neither of those governments have done it,” he said. “Neither of them are interested in doing it and all we are talking about here is the latest dirt on one party as opposed to the dirt which has been mentioned before that has yet to be uncovered and exposed on the other party. It makes no difference to the people. This is a charade. This is a spectacle.”

Mr Moss also spoke of the need for campaign finance legislation, saying: “If you are serious about campaign finance reform, it’s not just about limiting the amount of money that can be donated to somebody, it’s a matter about making public access to all opinions.

In a video recording on May 10, 2015 between Mr Nygard, Mr Bullard and Mr Davilma, the fashion mogul criticises Mr Christie for making “fake promises” over the issuance of a lease for which, he claims, he had received authorisation nearly 25 years ago.

Mr Nygard said: “There’s no f*ing reason it should take this long and keep making these fake promises and promise after promise. He was very distant because he was embarrassed about meeting me, you know?”

Responding to assertions by Mr Bullard that the PLP needed his sponsorship, Mr Nygard said: “Yeah, they’re fed because no one else is going to do it.”

Mr Nygard replied that Craig Flowers, CEO of the FML Group of Companies, had also been a major sponsor of the PLP, but was now “pissed off” with the prime minister for breaking every promise he made to him.

In another meeting with the men on May 12, Mr Nygard said he was close to leaving the country because he felt the prime minister was wasting his time. Mr Nygard said: “I’m not putting this s here now (stem cell facility), I pissed away $5m. Since the PM got me involved its cost me five (expletive) million dollars of bulls s.”

Indeed, we must reform campaign finance. Time to do it, PLP, and stop talking about it, PLP, you've been doing that for a while...

Seems like Hubert Ingraham will have to come out of retirement if only to bring cohesion to the FNM, rally the troops and manage the upcoming elections from behind the scenes. The constant blunders by Hubert Minnis, the fierce infighting and the roast the chairman, Michael Pintard, finds himself in makes the party appear least prepared for elections. The PLP is known to go into elections with scandals and controversy looming over its heads and the DNA is the 'Go To' party. The swing vote is what will win the elections and unless any party can capture it, they will not win.

I'm still waiting to see what roast he's in. These guys claim to have some evidence but refuse to submit it to court. I'm sure Toogie and Bobo don't have any national security secrets that need to be hidden from the public. The only possible explanation is the new info makes either the DPM or PM look worse than they already do.

“From where I stood in the election, I could not believe that they would’ve had those kinds of resources. I know I went to the bank and funded my own campaign. If I knew resources were available that I could’ve accessed, I would’ve done that."

LOL why spend yours when you could spend theirs ay. Sir you ain't easy lol

Comrades any lawyer, or politician, publicly stepping forward to address " Nygardgate," should be asked by the reporter to set the record straight pertaining to, if they are presently or have previously been involved with any of the people mentioned in the videos and court filed affidavits.
For the record, their responses should be so noted to give clarification for readers to be aware of such involvement.

words are cheap. he too was in charge until recently, how come he did not push this agenda?

Few other things that need reforming as well, the mass genocide from the dump would be a good start.

WTF do these people actually DO!??

What do they do? They collect salaries and allowances, etc., and generally live off the FAT of the land, if you follow my meaning.

Comrades i want give warning all House of Assembly MP's and Senators, and applicable government officials, that there is great hope across Bahamaland, that after the expiration filing deadline of March 2016, if it cannot be confirmed that their financial disclosure statements are up to date, swift action will be taken.
According to the Public Disclosures Act, the disclosures must be turned into the Public Disclosure Commission, by March each year, documenting assets and liabilities of the previous 2015 year.
Failure to so do, can result in a prison sentence of not more 2 years.
Should you not file as required by the law, a writ will be filed with the courts, demanding you be brought before the courts, as an offender of the law.

If Damien Gomez really leads this campaign finance reform Bill in Parliament ....... he will really be considered extraordinary

Comrade Minister of State for Legal Affairs Damian Gomez, Central & South Eleuthera MP, and Minister of Youth, Sports and Culture, reportedly told a Tribune reporter back in "June 2014" that he hoped to bring his financial disclosures up to date in a matter of days.
Damian was not alone. Seven other parliamentarians had not filed. One admitted not filing for at least two years.

What needs reform is the character of the people of the Bahamas, more importantly, the character of its elected and appointed leadership! All else will follow in due course when there is actual and firm penalty for fraud and payola, petty theft and grand larceny! All crimes are committed by people, with a large and almost total number doing so in the name of the government! Until we hold individuals accountable for their individual actions, under rule of law, the boat will continue to sink.

Only the bridge of the boat is above water now. The crew (that's us) are in the drink and treading water. The captain and first mates (that's the politicians dem) are in the bridge sipping champagne and counting their cash.