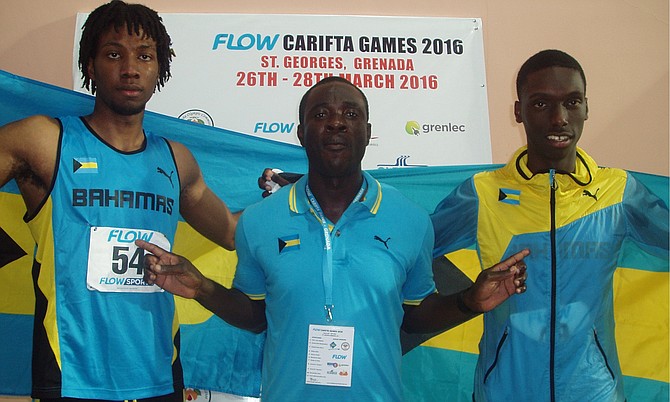 ST. George's, Grenada: The BTC Bahamas Team picked up their first two gold medals from Jyles Etienne and Kendrick Thompson and, highlighted by four silver medals in the 4 x 100 metre relays, extended its total to 18 on Sunday as day two of the 45th Carifta Games came to a close at the Grenada National Athletics Stadium.

Going into the final day of competition on Monday, Team Bahamas has compiled a total of two gold, seven silver and nine bronze, the last coming from Serena Brown in the girls under-20 discus in the final event of the night. That pushed the Bahamas into second place behind defending champions Jamaica.

In what was the performance of the day for Team Bahamas, Etienne had to go to a jump off to secure the first gold in the under-18 boys high jump for the Bahamas to win its first gold medal at the games. He cleared the winning height of 2.07 metres or 6-feet, 9 1/2-inches on his second attempt to snatch the gold after Jamaica's Kobe-Jordan Rhooms missed both attempts and had to settle for the silver with 2.06m (6-9). In another showdown, Benjamin Clarke added another medal for the Bahamas with a tie for the bronze with Jaden Bernabela of Curacoa as they both turned in personal best of 2.03m (6-8).

"I was just listening to what my coach James Rolle was saying to me, don't reach for the bar and just make it happen," said Etienne, the 6-feet, 5-inches basketball player from High School in New York, who only competed in his second meet for the year and was short of his personal best of 2.11m (6-11). "It feels good to win the first gold for the Bahamas."

In posting his PR, Clarke said he was nervous at the start, but as he progressed in the competition, he managed to get rid of the jitterbugs.

"Through the competition, I realised that I'm a great jumper and I could beat everybody here," said Clarke as he beat his chest when he matched his 2.00 previous best. "I just had to attack the bar more and I told myself that I could do it."

The two medals came just as Team Bahamas was picking up a silver and bronze in the boys under-20 pole vault from Douvankiylin Rolle and Ramel Poitier with 3.70m (12-1 1/2) and 3.60m (11-9 3/4) respectively. Gabrielle Gibson opened the evening session by clinching the bronze in the girls under-18 400m hurdles in 1:01.16. And, after two days of intense competition in seven events, Kendrick Thompson got the gold with a total of 5,849 points and Ken Munnings was the bronze medal with 5,560. Jamaica's Marcus Brown was the silver medalist with 5,800.

Serena Brown, who fell short of the podium with her fourth place in the shot put on day one, returned with vengeance and got the job done by tossing the discus 45.97m (150-10) on her first attempt for the bronze. Jamaican Sharice Love got the gold with 52.05m (170-9), a IAAF World Junior qualifying mark and Davia Brown of Jamaica was the silver medalist with 46.66m (151-3). Breshe Wood, who came from school in time to compete, was fourth with 44.80m, which also came on her first attempt.

After coming so close the day before in the girls under-18 shot put, Tiffany Hanna went to bed and dreamed about stepping back into the stadium and winning a medal in the discus. As the only Bahamian competing in a final event during the morning session on Sunday, Hanna got her wish as she tossed the heavy flat plate a personal best of 39.80m (130-7) for the bronze. The gold went to Jamaica's Aiko Jones with 46.49 (152-6) and Lacee Barnes of the Cayman Islands picked up the silver with 43.67m (143-3).

"In the shot put, I didn't do as well as well as I wanted to, but I did my best," said Hanna, who was sitting in the silver position until she got passed by Barnes in the final round. "I thought about it, but I never let it get me down. This feels good. To get a medal and to do it with another personal best after I missed it with a personal best in the discus, it's good."

Moments after she came off the field, the first person to greet her was her mother, Dr Alvery Hanna, who serves an a member of the medical staff for Team Bahamas. Her coach, Dawn Johnson, was on the sidelines helping her out in the competition and she had the junkanoo music in the stands playing and some of her St Augustine's College team-mates cheering for her, so she knew she had to come back and pull it off.

"i knew that she had the potential to do," said Dr Hanna. "She put everything behind her comeback and so I expected her to do very well. She's actually strong in the discus and shot and she proved that today. I'm just so happy that she's going to go home with a medal because there were some people who felt that she should not have been on the team. She proved that she deserved it with her two personal best performances and a medal."

In the relays, the Bahamas could only muster second place finishes behind the dominance of Jamaica in all four 4 x 100s.

The girls' under-18 team of Kennedy Culmer, Sasha Wells, Megan Moss and Devine Parker clocked 46.37 as Jamaica got a strong third leg to pull off the victory in 45.87. In the boys under-18, the team of Trenton Ambrose, Adrian Curry, Shaqielle Higgs and Johnathan Smith ran 41.42, but Jamaica won with a superb third leg in 41.42.

The girls under-20 team of Taj Dorsett, Brianne Bethel, Kaylea Albury and Janae Ambrose did 45.62 for the silver after they had a slight bubble on the second exchange and Jamaica capitalised for the gold in 44.30. And the boys under-20 quartet of Samson Colebrooke, Ken Russell, Javan Martin and Keanu Pennerman posted a time of 40.27 for their silver as Jamaica pulled away on the second leg to win in 39.74.

Also during the morning session, just one of the four 800 metre runners will make it back for the final, but all eight of the 200m sprinters booked their tickets to the finals, which will be contested on the final day of competition on Monday.

In the girls under-18 800m, Quanisha Marshall ran 2:18.63 for third in her heat to advance to the final. Britni Fountain, still recuperating from her bronze medal performance in the 400m the night before, didn't make it, placing seventh in her heat in 2:40.99. The boys under-18 two-lap race was more difficult as Baron Wilson clocked 1:58.79 for fifth in his heat and Bryant Lowe was also fifth in his heat in 2:00.01 - they both failed to move on.

On the other hand, it was a successful outing for the half-lappers.

Megan Moss began the show by turning in a second place in her heat of the girls under-18 200m in 24.53 and Devine Parker, back after her silver medal in the century the night before, got edged at the tape by British Virgin Island's Beyonce De Freitas as they were both timed in 24.14. Kaze Poitier sped to a winning time of 21.69 in his heat of the boys under-18 race and Johnathan Smith was third in his own as they both qualified.

And in the girls under-20 division, Jenae Ambrose, who only arrived here the day before, got through the jetlag for a second place in her heat in 23.66 and Brianne Bethel, a bronze medalist in the 100m the night before, advanced with her second place finish as well in 24.09. Both times were IAAF World Junior Championships qualifiers.

Samson Colebrooke, the male captain of Team Bahamas, ran away from the field to stop the clock in 21.28 to secure the top spot and Keanu Pennerman, the Purdue University freshman who was fifth in the straight away race, got third in his heat in 21.45 as he also clinched a lane in the final.

The games will wrap up on Monday and Team Bahamas is scheduled to return home on Tuesday.