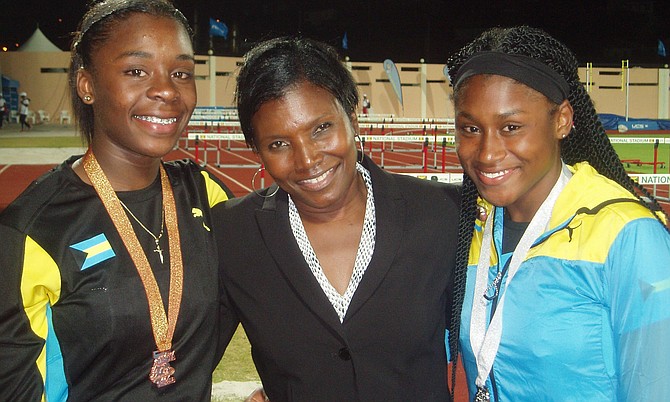 IAAF Councilwoman Pauline Davis shares a moment with Brianne Bethel and Devine Parker after she presented them with their bronze and silver medals respectively from the 100m.

ST. George's, Grenada: The BTC Bahamas Team closed out day one of the 45th Carifta Games on Saturday with six medals, including two silver and four bronze, while there were a couple of close fourth place finishes at the Grenada National Athletics Stadium.

The medal haul began in the evening session with Malik Stuart getting the first on the field in the men's discus with a toss of 52.18 metres for the bronze behind the electrifying performance from Grenada's Josh Boateng with 57.19m for the gold and Jamaica's Kevin Nedrick's 53.53m for the silver. Perry Adderley had to settle for seventh with 40.51m.

"I believe that I could have done better. I was a bit passive with the discus throw, but I have to be happy with the fact that I got a personal best," said Stuart, who returned to the games for the first time since he made his debut in 2014 in Martinique. "I do believe that people competed tonight and tried to win, so it was a good competition. I'm just glad that I got a medal."

The first medal on the track came from Britni Fountain in the under-18 girls' 400m in a time of 54.68 seconds for the bronze. She was followed by Shaquania Dorsett with a silver in the girls under-20 400m in 52.50 and Kinard Rolle pulled off another bronze in the boys' under-20 one-lap race in 46.88.

"It feels amazing representing my country all the time. I feel good," said Fountain of her performance in which she had to come from behind on the home stretch. "I heard the crowd roaring and the junkanoo music. I was very pleased with the performance. It was a personal best."

Fountain came in behind Jamaica's Stacy-Ann Williams, who got the gold in 54.00 and Grenada's Amanda Crawford, the bronze medalist in 54.16.

As for Dorsett, she was more than thrilled by her accomplishment. The winning time was 52.07 by Sada Williams of Barbados.

"I'm very happy that I PRed. I actually did it twice today, so I'm very happy," she stated. "It was windier than the heats, so I tried to keep fighting it until I got out of the windy area. I just kicked and bring it home."

Rolle, coming from the indoor season at Purdue University, admitted that he didn't exert that much energy because he wanted to preserve himself for the final.

"Coming off the 200m, I knew I had to shift gears. I could see them in my view. I knew they were on the side of me, so it was time to go," said Rolle, who led the race up until the home stretch when he was passed by defending champion and record holder Akeem Bloomfield from Jamaica, who retained his title with 46.01, while Cayman Island's Jamal Walton got the silver in 46.23.

In the 100m final, the Bahamas picked up two more medals with Devine Parker securing the silver in the under-18 girls' century in 11.77, while Brianne Bethel clinched the bronze in the girls under-20 straight away race in 11.75. Both medals were presented by IAAF Councilwoman Pauline Davis-Thompson, a standout for the Bahamas during the 1980s.

"It feels good. I definitely put in the work and it paid off," stressed Parker, who lost out to Jamaica's Kimore Shaw, the winner in 11.56. "I would have liked to get the gold, but it's something that I will have to work on for next year."

Bethel, the Grand Bahamian speedster, was a little disappointed after she lost out to Khalifa St Fort of Trinidad & Tobago in 11.40 and Jamaica's Patrice Moody, who did 11.68 for the silver.

"I got out well, but I didn't feel like I was pushing hard enough," Bethel said. "I will get them in the next race."

The Bahamas had two competitors in the final of the boys' under-20 100m final, but Keanu Pennerman just missed out on getting on the podium when he placed fourth in 10.47 and Javin Martin trailed in fifth in 10.55. The race was won by Jamaica's Nigel Lewis in an impressive time of 10.19 to bring the curtain down on day one.

And in the preliminaries of the 400m, five of the eight competitors advanced to the final.

The boys under-18 division saw Kaze Poitier advance with 49.82, but Lavardo Henfield failed to move on.

Shaquania Dorsett set the tone for the girls under-20 division as she coasted to victory in her heat in 53.02 for the fastest qualifying time. Brittni Bethel was fifth in her heat in 56.40, a personal best, but it wasn't enough to bring her back as she fell short with a ninth place overall.

As for the under-20 boys division, Kinard Rolle and Verdell McIntosh, surprisingly, drew the same heat. While Rolle was third in 47.78, McIntosh got fourth in 49.88 as they were fifth and eighth overall.

The highlight of the session was the record setting performance by Trinidad & Tobago's Tyriq Horsford improving on his games' record of 70.73m (232-0) that he set last year in winning the under-20 boys javelin with 73.00m (239-6). The Bahamas didn't have any participants in the event.

With all the negativity floating around the Bahamas, it is refreshing to hear good news coming from the sports arena. Always proud of our world class athletes! Shout out to the entire Bahamas team!