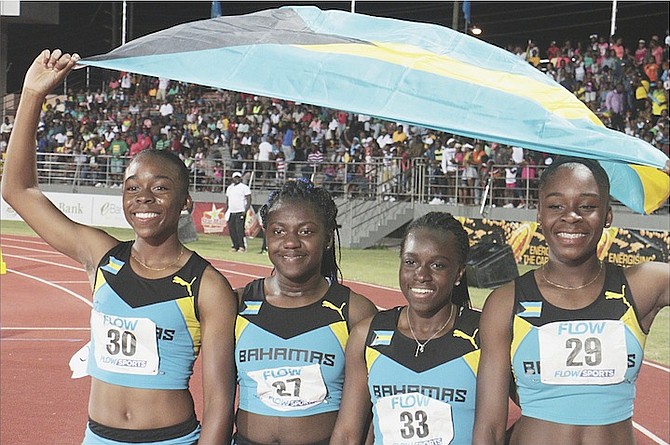 St George’s, Grenada — While Kendrick Thompson posted the only record for the Bahamas at the 45th Carifta Games here over the Easter holiday weekend, there were a number of athletes who qualified for the IAAF World Junior Championships in Bydgoszcz, Poland, including Brianne Bethel with a double dose of achievement.

Thompson’s mark came in the boys’ open octathlon Sunday night when he collected a total of 5,849 points in the eight-discipline event to erase the previous mark of 5,839 that was set last year by Jamaica’s Shakiel Chattoo in St Kitts and Nevis. It was one of 12 records that tumbled during the 66 events contested over the exciting three days of competition.

Thompson, 18, beat out close friend and arch-rival 19-year-old Ken Mullings, who had to settle for the bronze with 5,560 points. The duo hope to one day follow in the footsteps of American Olympic and world outdoor and indoor champion Ashton Eaton as an international decathlete.

Leading the way for the World Jr’s qualification, Bethel set the tone for other under-20 competitors to follow when she clocked 11.75 seconds for her bronze in the 100m.

Her time was well under the time set for Poland of 11.80. As a matter of fact, Bethel surpassed that mark from the preliminaries when she turned in an impressive personal best of 11.62 for second overall as she also improved on her previous PR of 11.65.

The 17-year-old Grand Bahamian, who lists Jamaican Shelly-Ann Fraser-Pryce as her favourite athlete, came back in the 200 and got a second qualifier for Poland when she ran a PR of 23.93 for fourth place, just missing a trip to the podium. In the heats, she did 24.09 as she went below her previous PR of 24.21 twice.

Purdue University’s freshman Keanu Pennerman had a season’s best of 10.48. He got out of the preliminaries of the boys’ under-20 100m with 10.51 and was fourth in the final in 10.47 to qualify for Poland.

Shaquania Dorsett, the lil dynamo, clocked 53.02 to win her heat and came back in the final and improved on that with 52.50 for the silver in the girls under-20 400, Both times were faster than her PR of 54.78 as she also qualified for Poland. The standard was 53.25.

Jenae Ambrose, now in her freshman year at Auburn University, also qualified for Poland after she picked up her silver in the girls under-20 200m in 23.39. The qualifying time was 23.79. Ambrose had a previous PR of 23.79 and she improved on that from the preliminaries when she did 23.66 to get into the final.

And both Tavonte Mott and Shakeem Smith added to the Bahamian list for Poland when they bettered the qualifying time of 14.20 for the boys under-20 110m hurdles. While Mott clinched the silver with his time of 13.81, Smith trailed him for the bronze inn 14.12. Mott had a previous PR of 13.90, but Smith didn’t improve of his time of 13.75.

Grenada’s Anderson Peters led all qualifiers at the games for Poland when he produced a winning throw of 78.28m in the second round of the boys under-20 javelin on Saturday. He set both a Carifta Games and a Grenadian national record as he earned the Austin Sealy Award as the best performer at the Games. The selection was unanimously done by members of the media, headed by CASJA, the regional body of journalist with Michael Bascombe of Grenada as the president.

On hand to make the presentation was Lord Sebastian Coe, the new president of the IAAF, patron Austin Sealy and Victor Lopez, president of NACAC, under whose jurisdiction the games fall are held.