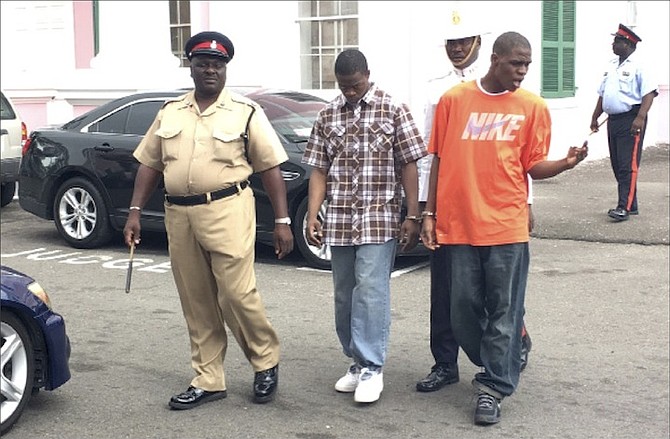 A JUDGE who spared a 22-year-old man the death penalty yesterday in connection with a 2012 murder case expressed concern at an increasing trend of young men under the age of 30 being tried and convicted of violent crimes.

Justice Indra Charles had been asked by prosecutor Uel Johnson to impose the death sentence on Livingston Woodside for the June 3, 2012 shooting death of Owen Rose Sr.

Rose, of Elizabeth Estates, was found dead that night at Washington Street with gunshot wounds in his body.

It was the Crown’s case that the murder was a paid execution with Woodside, who was 19 at the time, pulling the trigger. His alleged accomplice, 19-year-old Glenardo Johnson was 16.

A jury unanimously convicted both men of murder on May 1, 2015.

The judge sentenced Woodside to 40 years and Johnson to 35 years imprisonment at the Department of Correctional Services to run from the date of conviction.

Both were credited three years for time spent on remand prior to conviction, reducing their respective sentences to 37 and 32 years.

“One cannot restate the number of murders committed in this country by young men like the ones in the prisoner’s box,” Justice Indra Charles stressed.

“It bothers me why so many young men are continuously before this court. It’s very rare to see someone who is 30 years old charged with these crimes. The trend, it seems, is to see them much younger as even teens are appearing in Supreme Court and it appears to me that message we (the court) are sending out is not sounding.”

“The court should be cognisant of the fact that just about every day the newspapers read murder,” the judge also stressed.

Justice Charles said notwithstanding these serious concerns, “each case must be determined on its own peculiar facts.”

The judge acknowledged the 2011 amendment to the Penal Code, which followed the Privy Council’s decision in the Maxo Tido decision, which notes that only certain types of aggravated murder are currently punishable by death. These include murder of a law enforcement officer; murder of a judicial officer, including judges, registrars and prosecutors; murder of a witness or juror; murder of more than one person; murder committed by a defendant who has a prior murder conviction; and murder in exchange for value.

The amendment further provides that any murder committed in the course of/or in furtherance of a robbery, rape, kidnapping, terrorist act, or any other felony is punishable by death, with no explicit requirement of intent to cause death.

Justice Charles said the appellate court, in its Simeon Bain decision, ruled that the crimes named in amendments met the threshold of consideration of the imposition of the death penalty.

However, she also had to consider the case on its own merits and whether the circumstances determined it to be the “worst of the worst” and “rarest of the rare.”

Justice Charles said she also had to consider Woodside’s reasonable prospects for reform as presented in a probation report given to the court.

Johnson was told that because of a provision in law, he could potentially be released after serving 20 years following a review of his time in custody because the offence was committed as a juvenile.

Justice Charles ordered both men to enrol in anger management sessions as “both of you appeared to be angry throughout the trial.”

Jiaram Mangra and Christina Galanos represented the pair at trial.

Johnson and Woodside have the right to appeal the conviction and sentences.