Attorney General ‘Happy Where She Is’ Amid Chief Justice Talk 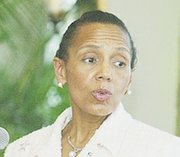 ATTORNEY General Allyson Maynard-Gibson said she is content with her current post as she sidestepped rumours that she may be appointed chief justice.

In a recent interview, Mrs Maynard-Gibson told The Tribune that she was happy and loved her present role and responsibilities.

She said the selection of the next chief justice would be determined by the prime minister, adding that it would be inappropriate to comment on the matter while the position is currently filled.

Her statements were in response to speculation that Chief Justice Sir Hartman Longley is expected to demit office soon, and that Mrs Maynard-Gibson was being considered to replace him.

Mrs Maynard-Gibson said: “We have an excellent chief justice in Sir Hartman Longley. He’s hard working, he’s smart, he’s very intelligent. And again like all of our judges his integrity is beyond reproach. He’s a zealous patriot for anyone to see the judiciary in our Bahamas flourish. So I’m so happy that he’s there and he’s doing very well.

“I have the privilege of serving as attorney general under this administration. I love going to work every day, I enjoy every minute of my day.

“I enjoy working with the people that I’m working with, who are working very hard to impact positively the lives of everybody in our Bahamas. And what we’re doing in Swift Justice and the Registrar General’s Department is working and people are beginning to feel it and they’re saying so.”

She added: “So I tell you, I love what I’m doing, and the question of the chief justice is a matter solely for the prime minister, and I am a happy attorney general.”

The chief justice, the highest post in the judicial system, is appointed by the governor-general after recommendation by the prime minister.

This is the second time Mrs Maynard-Gibson was rumoured to be a likely candidate for the post; the first was in 2014 following the resignation of former Chief Justice Sir Michael Barnett.

On April 24, Bahamas Bar Association President Elsworth Johnson called for more objectivity in judicial appointments - particularly with regards to the office of the chief justice, and stressed that the selection process should be “fair and free from any political bias.”

The majority of right-thinking Bahamians are not happy with her in the AG chair or any chair connected to governance of this country ........ she is the Rasputin behind Perry and Brave ........ she covers up, deflects, buries, and neutralizes all of the PLP government's warts (aka dirty deals & crookedness)