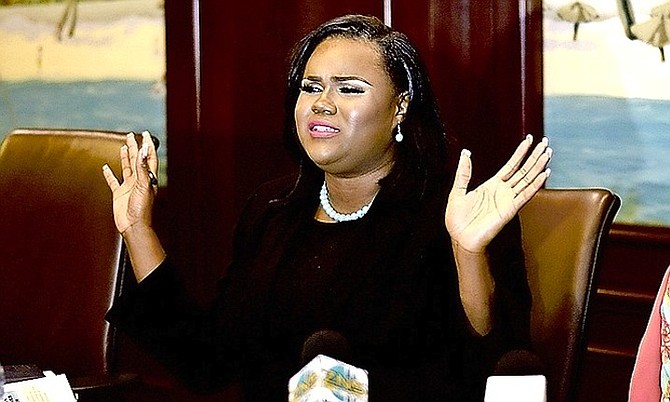 HUMAN rights activist Erin Greene said Tall Pines MP Leslie Miller’s “campaign” to exile transgender people to a private island underscores a “severe degree of ignorance” regarding LGBT issues, as she raised concerns that his “hate speech” has incited fear among Bahamians in that community.

In an interview with The Tribune yesterday, Ms Greene urged public officials and religious leaders to send a clear message that Mr Miller’s “heinous” comments will not be tolerated.

Meanwhile, lead spokesperson of Bahamas Transgender Intersex United (BTIU) Alexus D’Marco rebuked the former minister of trade and industry, saying he was “spewing venomous hate” that if allowed to continue, would feed “homophobic” and “transphobic” attitudes in the country.

She said the organisation has been in communication with international human rights groups who have pledged support and are also willing to provide a safe haven for those transgender and gay people who might feel threatened. However she declined to go into detail about this.

On Monday, Mr Miller told this newspaper that he would be the first to donate financially to having those in the transgender community exiled to their own private island to ensure “they stay out of the way” of generations of Bahamians who are depending on the success of the June 7 referendum.

The MP said he would give the group its first $1,000 toward relocating and that it was his constant prayer that “God would come now and just end the world” as their actions “go against His will”.

It is these words in particular that Ms Greene said she took exception to because they play on Bahamians’ sincere fear of God, which she said was “dangerous” in a fundamental Christian society where there is a growing lesbian, gay, bisexual and transgender (LGBT) community.

“Words such as those from Mr Miller manifests a severe degree of ignorance about basic biology, about his role and function as an MP and as representative of both the government and citizens,” Ms Greene said yesterday.

“Unfortunately I think he is unaware and oblivious to just how dangerous this speech really is. His statements are anti-democracy, anti-humanity (and) anti-Christianity.”

Asked if there were fears that the LGBT community could experience a proliferation of violent acts against them, Ms Green said: “Absolutely.”

She said the more visible the group becomes, the more they are perceived to be pushing an agenda, which could spark a higher risk of violence.

“While on the surface we might be quick to say ‘this is just ridiculous Leslie Miller’ or ‘let’s be happy he says what is on his mind’, this tone of speech is so dangerous because it is subtle and for the average Bahamian the violence is so subtle that you might glide over it.

“But starting a campaign to exile trans people to an island is subtly saying we need to figure out how to exterminate them. Then when you bring out the religious talk you are playing on the sincere fear of going against their God and you may inspire in others a sincere belief that they have to exterminate all trans people to save the world. And that is dangerous to do in a fundamental Christian society,” Ms Green said.

In a separate interview, Ms D’Marco added that Mr Miller’s words could have serious implications on the country’s tourism industry.

She told The Tribune: “My whole thing is that tourism is our bread and butter. We have parents and businesspersons here in this country. We have tourists who (are) transgender individuals who have come to this country every year and by them speaking like this it is just loose and callous speech.”

“Coming from a member of Parliament, somebody who represents the people and with transgender individuals in his constituency, we need to be very careful and cautious of what we say and how we say it because the world is watching,” she continued.

There are more than 50 transgender male, female and youth living in the Bahamas, BTIU has said.

As long as he is in power in this country his views are tolerated.

Bless up to all the oppressed ghetto youths regardless of what

There is nothing ignorant about being against sissies or trannies............. it is about REMINDING THEM about the sure and certain eternal damnation awaiting those who engage in unnatural sexual acts .......... just like all of the fornicators, adulterers, child perverts and beast-lovers etc. ................. GOD IS NOT DEAD, HE IS STILL ALIVE

Judge not, lest you be judged and let he who is without sin cast the first stone! GOD IS NOT DEAD, HE IS STILL ALIVE!

wel the goverment suported the 'yes vote now LESLIE MILLER has embarked on a self-sponsored 'NO' campaign . don't ry to fix what is not broken, wrists included.