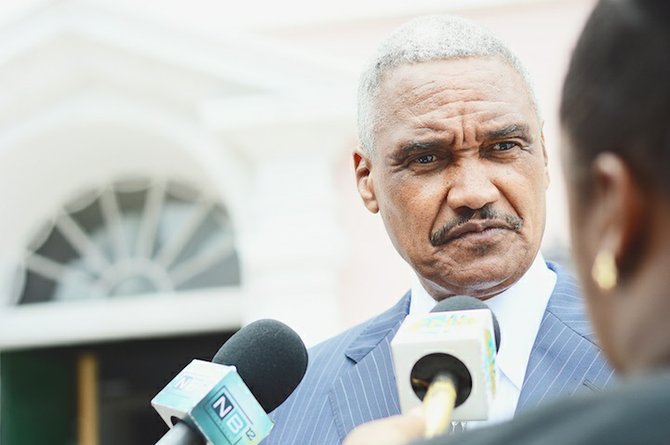 TALL Pines MP Leslie Miller said he does not see the need to apologise for his disparaging comments that members of the transgender community should be exiled to a private island.

When asked if he would apologise for the remarks, the former Cabinet minister responded: “For what? I don’t see the need.”

On Monday, while denouncing the transgender community, Mr Miller pledged to give the group its first $1,000 toward relocating. He added that it was his constant prayer that “God would come now and just end the world” as their actions “go against His will.”

“Let me say first of all that I never said I was speaking for the party but I was speaking on behalf of the Bahamian people,” the Progressive Liberal Party MP said yesterday, when asked to respond to the backlash he has received from some quarters.

“When I speak, it is what I am hearing from people on the ground.”

“I have nothing against these people. When I go in my constituency and I talk to people every day they question me and have serious questions for the government. These are fair-minded people who constantly ask, where it is that we draw the line?

“What am I to tell my grandchildren when they see this kind of behaviour? Is this the type of life we should emulate?”

He added: “My point is that if you want to live that kind of lifestyle, keep it to your self. Don’t come out bragging so big and bold. It’s as if you are trying to impose your will on us.”

The former minister of trade and industry also dismissed the concerns of Bahamas Transgender Intersex United (BTIU), which last week made its debut at a press conference calling for equal rights for transgender Bahamians.

In response, Mr Miller said on Monday: “If you want to like man, that’s your damn business but don’t try to impose your will on other people.”

He told this newspaper that he was of the view that members of the transgender community were currently being treated equally because “they are men therefore you go and live like a man, you are a woman (so) you live like a woman.” This he said was equality in the eyes of God.

BTIU representatives have called on the Christie administration to ensure that the fundamental rights of all genders of Bahamians - male, female and transgender - are protected.

“I have children and grandchildren and we (are in) a society that is already fractured with all the damn crimes and things that are happening in our country,” Mr Miller said on Monday. “Why is it that everybody has to have their own way in our country? We are supposed to be a Christian nation and all you got is fighting between one church and the next.

“God should hurry up and come and get this over and done with so we don’t have to worry about them. Just come stop the world,” Mr Miller said.

On Tuesday, lesbian, gay, bisexual and transgender (LGBT) activists denounced Mr Miller’s “hate speech” and said they were afraid the comments would incite violence against members of their community.

PLP Chairman Bradley Roberts released a statement on Tuesday saying Mr Miller’s comments do not reflect the policy position of the party or the government.

Whether we agree or not his opinion on this topic does represent the majority of Bahamian mindsets. And as crazy as he is, and sounds, one thing I respect about this man is he lets u know where he stands. He is the Donald Trump of the Bahamas. The man speaks his mind & is honest. I don't agree but I respect him over any lying politicians from either side.

this man lied so much (electricity bill, hitting women, and on and on and on), and you say it yourself when you proclaim him the Trump of the Bahamas. what both men have in common is that they don't know anymore when they lie and when they say the truth. He is not better he is different than the other politicians. bad are all of them. bad for you, me, us, the country. time to put all of them into the political garbage can.

Any excuse to forgive the big man... bowers

Miller grew up during the times when being gay was not tolerated and it was taught to be unnatural and UnChristain. Mothers use to beat young boys who acted feminine and threatened to continue beating 'dey ass' until they "turn man'. Fathers used to throw their sons out of the house on the street and tell them, 'ainn no sissy living under my roof',, and while neighbors would offer the outcasts something warm to eat or a sheet to sleep in, no one dared allowed the boy to move in or even sleep in their house against his fathers punishment. Arranged marriages for "sissy boys' to females were common, and some young men were told that they were going to make a baby with their wife even if they had to lock them in the bedroom every night "t'til she get big up'. These type of actions against gaypeople (it was mostly males back then) were not only common in the Bahamas, but all over the Caribbean and among black populations in the US. Gayness was taboo and was not tolerated. Back in the 1960's it was one in every hundred males thought to be homosexual or not a normal hetrosexual male.(US stats.). In the 1980's it was reported that 1 in every 20 males were homosexual and presently it is reported that 1 in every 5 males have sexual preferences that are not hetrosexual. What is the reason for this big jump in the number of persons turning against normal, hetrosexual relationships? Especially among the black population Some claim it is a demonic spirit. Other sources claim it is to do with the amount of hormones (female especially) being put in in the food supply and especially in milk, tomatoes, dairy products and yes, chicken. Some think other factors such as single parent homes, influence of movies and music, peer pressure also play a role in forming a person's sexuality. Another trend that is developing among young, gay men is they are becoming celibate. They don't want to be bothered with sex or even being in a relationship. They just want to be alone (sexually) (US source).

i actually read through most of this post john, even though the unsubstantiated statistics.

then i read about the demonic forces and gave up.

Before you claim the stats are unsubstantiated, go and do some research and prove the statistics wrong, then i will give you my sources and you can take the issue up with them.

Question : which James Bond movie featured a "post op" tranny and when was it released? Answer : "For Your Eyes Only", featuring Caroline Crossey, the movie was released in 1981.

Cossey started transitioning after befriending a post-operative trans woman.[3] By 17, Cossey was receiving hormone therapy, living full-time in a female gender role and had begun a career as a showgirl at a London nightclub.[3] Despite initial shock, Cossey's parents were eventually supportive.[1] Following breast augmentation surgery, Cossey worked as a showgirl in Paris and as a topless dancer in Rome to save up for sex reassignment surgery (SRS). After years of hormonal and psychological treatment, and legally changing her name, Cossey had her final surgery on 31 December 1974 at Charing Cross Hospital, London.[1]"

Mr. John it seems like Leslie Miller is racist.