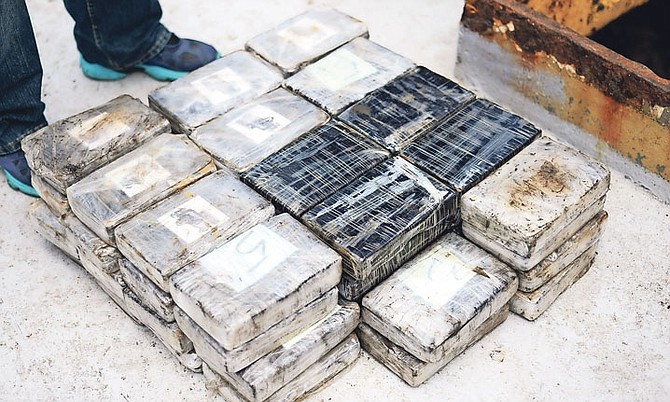 Suspected packages of cocaine were seized.

SIX Haitian men are in police custody after they were caught with nearly $2 million worth of cocaine late Tuesday.

Chief Superintendent Samuel Butler, officer-in-charge of the Drug Enforcement Unit (DEU), said a combination of team work and “excellent textbook” police work led to the drug bust and the arrest of the suspects on a 60-foot freighter near Eleuthera.

This cocaine interdiction came hours after a woman from Suriname was caught at the Lynden Pindling International Airport with seven pounds of cocaine.

“We were successful in interdicting a large cocaine seizure. The Drug Enforcement Unit, acting on intelligence from the southern islands, determined that a large 60-foot freighter did not call to a port in Inagua,” Chief Supt Butler said.

“We continued our surveillance of the vessel and off the northern tip of Eleuthera we intercepted the boat around 7.30pm. The vessel had six males on board and they were taken into custody. We ferried the vessel into New Providence around 5am. DEU officers searched and found several concealed compartments.

“In them we found a number of packages with suspected cocaine. We are still early in the investigation, but we feel really happy in short order we will have a group of persons before the court. Based on the documentation we found on the men, the vessel originated out of a port in Haiti and they are all Haitian nationals.”

Chief Supt Butler said the DEU believes this shipment is connected to other drug seizures in the Bahamas but “we are working to confirm it.”

He also said the DEU will “leave no stone unturned” and will find who is funding these operations.

“This is a drug trafficking network of persons collaborating together,” Chief Supt Butler said.

“Sometimes we mistake what the operation looks like because you only see the mules but behind the scenes there is a person with large means, who purchased the large vessel and who purchased the cocaine and who facilitates the movement of the drugs through territories.”

In February, DEU officers seized nearly $2m worth of cocaine from a boat in Inagua. Five Haitian men were also arrested in the seizure.

According to reports, DEU officers, along with Operation Bahamas Turks and Caicos (OPBAT), and Inagua police, acting on intelligence conducted a search of a vessel that came from Haiti. During the search, officers discovered 126 kilos of suspected cocaine.

This has been going on unabated for decades. The only real surprise is DEU actually making arrest instead of the usual bought and paid for collaboration with these criminals by the elites!

In think its time to stop being negative about the Police and whilst acknowledging that there are deficiencies to compliment them on this seizure. It also begs the question of how many "supposed" illegal immigrants that land and are quickly assimilated into the Hatien community are also drug mules ?

I find it strange that we are only reading about foreign nationals getting caught for drug offences....Swedes, Dutch, Surinam, Haitian for example.

Is this the Government propaganda machine cranking up? To make us want us to hate foreigners in the run-up to next year's election......maybe they'll even show Roots later this year haha. And of course, none of the numbers houses are involved with drugs are they? Gee whiz....will someone please tell the Government that it is the 21st Century and we can see this for the BS it is

I congratulate the Police for this seizure, and the Customs Officers at the airport, but let us not kid ourselves that none of our fellow Bahamians are involved in the drug trade

This cocaine was headed to the U.S. and is one of the key reasons why the U.S. government needs to assist the Bahamian people in taking out the corrupt Christie-led PLP government. If mainland China gangs get involved in this drug trade, the U.S. will become flooded with easily available drugs and seriously weakened by an explosion in American drug addicts. Mainland China is already at war with the U.S. in many ways that Americans have yet to understand, and China has not set up shop in the Bahamas in recent decades just for our sun, sand and sea, or for the Bahamas siding with its voting block in the U.N. Uncle Sam had soon better wake up to what's happening on its door step just to the east-south-east of South Florida!

Sheeprunner I think the DEU needs to be an independent organization from the RBPF similar to the US DEA and the FBI.