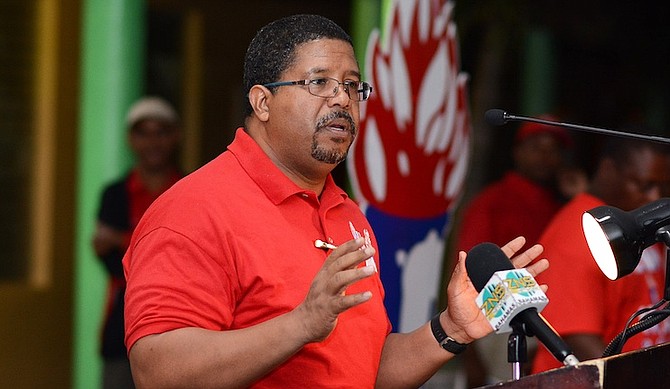 He provided the opposition’s preliminary response to Perry Christie’s extensive budget presentation, criticising the government for doing “next to nothing” to address the nation’s increasing unemployment, debt to Gross Domestic Product (GDP) ratio and international credit ratings.

“Despite their best efforts there is no running from the truth,” stressed the East Grand Bahama MP.

According to Mr Turnquest, the speech was “carefully crafted” with the intent of misleading the Bahamian public and give the impression that the government had successfully resolved the Baha Mar dispute and cut fiscal borrowing - two things the government moved to “grossly misrepresent”.

“There was nothing exciting about this budget,” he said. “It is interesting to me and I am very amazed that there was not more pork in this budget and of course, the details will tell us exactly where they plan to reallocate (this money).”

“The Prime Minister himself seemed subdued. His Cabinet colleagues were thoroughly unimpressed and that is telling you something. It is telling you that the economy is in such a position that they cannot even risk - we are on such a precarious edge in terms of our ratings in terms of our international standing - giving out any additional election funding,” he said.

Mr Turnquest said that the Bahamas has spent most of the last four years in economic purgatory. He insisted that the stagnant outlook of the country’s economy stands in complete opposition to the points presented by Mr Christie.

“We all know that there has been no progress and there is nothing here to celebrate. And I think the fact that there is nothing new here is an indictment, it is a confirmation that this government has run out of ideas and they have no creativity left; no vision and frankly, have ran their course.”

Mr Christie, during his nearly four-hour presentation, lauded his government’s ability to secure a “framework agreement” to resume construction efforts at the Baha Mar resort and cut the government’s fiscal borrowing over the course of the next budget cycle.

However, Mr Turnquest said the government’s presentation did not address any of the underlining factors that have plagued the country’s economy over the last four years.

Discussing the ongoing Baha Mar matter, he said Mr Christie has once again failed to deliver on bloated promises.

“That I believe was a real letdown for most Bahamians. The Prime Minister has made this build-up that there was going to be some announcement today,” he said.

“What the Prime Minister brought today was an agreement between the government and the EXIM Bank to have a further discussion to some resolution to some date in the future. Well, we have known that before.

“What we are looking for is some concrete steps, some concrete positions and a date certain when this project will be recommenced, when people will go back to work.”

He added: “The vendors, the contractors who are owed money, they want to know when can (they) expect to have (their) money. We don’t want to hear that you are in further discussions.”

Speaking on the government’s ability to lower its rate of borrowing from more than $500m in 2012 to roughly $99m in the upcoming fiscal year, Mr Turnquest warned the devil is in the details.

“The thing about that to watch is, while they borrow $99m to fund that deficit, they also borrow other money for other special projects along the way,” he said. “They are right, we don’t have to borrow the $500m that they normally borrow and you know why? Because they have been taking it from the Bahamian people through VAT (Value Added Tax).

“There is nothing to celebrate here. If they were saying to me that they had brought down the level of expenditure to the point that they were saving ... then I would give them credit, then they would have something to celebrate. But all they have done is transfer the burden from them - in borrowing - to you and I in expropriation in taxes.”

Mr Turnquest told The Tribune that the party will be looking at the proposed expenditure to identify ways it could be contained.

“At the end of the day any additional revenue that is collected, the government has promised that they were going to pay down the national debt. The national debt has grown by $1.6bn over the last four years,” he said.

“We are now well into the danger zone of 76.3 per cent debt to GDP and ... that is a worry for all of us. So we have to find out how we can further tighten up on the revenue measures, while finding ways to cut that expenditure so that we truly end up with a financial situation that we are proud of.”