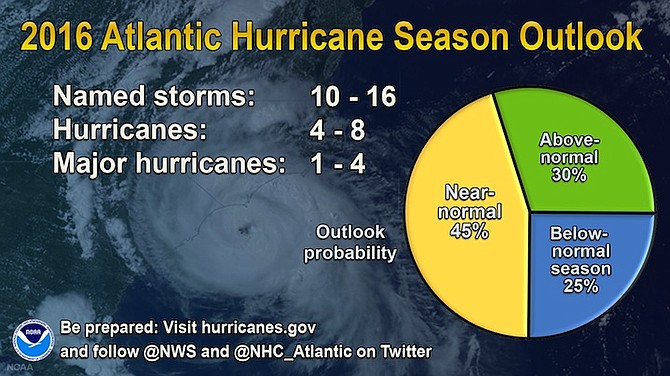 THE National Emergency Management Agency (NEMA) on Friday urged Bahamians to be aware of their level of preparedness as international forecasters officially announced projections for the 2016 Atlantic hurricane season.

Hurricane forecasters are predicting an average of 12 to 14 named storms, of which eight are expected to intensify to hurricane strength, with three becoming major storms - category three or higher.

Director of the Bahamas’ Meteorology Department, Trevor Basden presented the forecast from figures published by the National Hurricane Center (NHC) in Miami. The hurricane season runs from June 1 to November 30.

NEMA director, Captain Stephen Russell stressed that as the storm season nears, residents throughout the Bahamas should use this time to ensure that their homes and properties are prepared for hurricane force conditions.

Speaking to the media on Friday, Capt Russell said NEMA has finalised most of its preparations, saying that the department was now concluding its multi-sectoral meetings with other agencies throughout the country to verify that all essential mechanisms are in place and functional.

NEMA has been working closely with officials from the Ministries of Works, National Security (Police and Defence Force personnel), the Bahamas Telecommunication Company (BTC), Bahamas Power and Light (BPL/BEC), media outlets and scores of other emergency response departments throughout the public and private sector.

Currently, BTC is working to ensure that communication technology is established in a manner to ensure its continuous use throughout the storm season.

On land, the RBDF is said to be stocking supplies to ensure quick deployment when needed.

Meanwhile, Crooked Island remains a disaster area, there has been no official update on restoration efforts to date, and relief supplies donated to NEMA last year are still in their possession and/or have gone to persons on islands for which they were not designated - yet NEMA is admonishing us about hurricane readiness.