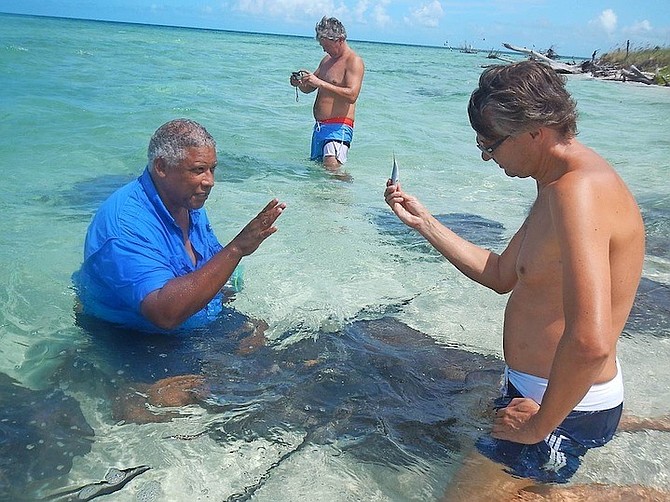 Keith Cooper, left, pictured during one of the tours that he operates to allow people to encounter stingrays.

THE Bahamian owner of an eco-tour business in West End claims that he and his wife have been threatened with demands by the foreign owners of Sandy Cay to cancel all their tours at the cay, even though the law permits them access up to the high water mark.

Keith Cooper and his wife, Linda, operators of West End Ecology Tours, take visitors out to the cay eight miles off West End to snorkel a boat wreck and to feed stingrays. Their eco-tours have received five-star ratings on TripAdvisor, a leading travel website.

However, during recent tours to Sandy Cay, it is alleged that one of the American owners was “rude and disrespectful” to Mr Cooper and his guests and refused to permit them to come ashore.


According to Mr Cooper, the first incident occurred on April 29 when he was hired by the owner of Nandana Villa Resort at Old Bahama Bay, West End, to take some of their guests to Sandy Cay to snorkel the boat wreck and feed the stingrays.

Mr Cooper and his wife took a group of seven adults and one child on the tour, first stopping to snorkel the boat wreck nearly half a mile from Sandy Cay, while the resort owner went on ahead to the island in a second zodiac boat to set up lunch for the guests.

“We were planning a picnic on the cay with the guests and to feed the stingrays. As we were completing the snorkel on the wreck the zodiac … (someone) quickly returned to inform us we could not use the cay because the ‘owners’ were visiting for three weeks, and did not want anyone to come ashore. We were shocked when we heard this news,” he said.

When Mr Cooper went to the island, he said he found a 60ft sailboat, a 26ft motorboat and a dinghy anchored there. Dr Brohammer and a couple - a man and woman - were on the sailboat, and another couple was staying on the island in a tent, he said.

After speaking with Dr Brohammer, Mr Cooper said he agreed to allow him to conduct his tour, but asked that he remain at the high water mark and not disturb the couple on the cay. While there, Mr Cooper claims that an older man on the cay, who said he was one of the owners, was obnoxious, intimidating and spoke in a demeaning manner to anyone approaching the cay.

“He (the older man) told the group that he and his woman wanted to ‘skinny dip’ and needed privacy. When I approached him to discuss further, it was clear that our presence was not welcomed and he did not want us to stay even for a minute. I tried to explain to him that I earn my living by providing guests with an ecology experience and have been doing so for more than five years without any disruptions,” said Mr Cooper.

“Everyone stayed aboard the boat and listened intently to this tattooed man’s rude and disrespectful manner to Bahamians, visitors to Grand Bahama and the Nandana resort owner. I sensed it was going to be confrontational and I quickly returned to my guests after having been given permission by Dr Brohammer to conduct my tour, which we completed as quickly as possible under great duress,” he said.

On May 1, Mr Cooper returned with another group of Bahamians and a Canadian. He obtained permission again from Dr Brohammer that he could conduct his tour only if he stayed below the high water mark, which he said he agreed to do. While conducting his tour, Mr Cooper said they felt uncomfortable and afraid by the “rude cold hateful stares” of the tattooed man.

Mr Cooper gave Dr Brohammer and his owners a full colour copy of his birding and ecology brochures, along with website information, his Facebook page and business card.

“I wanted them to know that I was not a threat to them and about our conservation efforts to keep the cay clean and provide visitors with a unique Bahamian experience,” he added.

The following day, Mr Cooper alleged, Dr Brohammer and the tattooed man came to West End to speak with him at his home, but he was in Freeport purchasing food for upcoming tours.

Mr Cooper said his wife told him that while Dr Brohammer was trying to be reasonable and allow them to use the cay up to the high water mark for their tours, the tattooed man demanded that they cancel all their upcoming tours - which included seven dates in May - at Sandy Cay.

On May 3, Mr Cooper returned to the cay with a third group of guests from the Netherlands. He also invited Clement Campbell, superintendent at the Department of Marine Resources, to accompany him to meet with the purported owners as the demands they were making seemed unreasonable.

“Once Mr Campbell arrived to the cay to question the visitors I could hear that a woman was cursing at him in a very loud, condescending and obnoxious manner. At the time I was in my boat and quickly left to assist Mr Campbell in case they attempted to physically harm him,” he said.

“I was questioned by the cursing woman why ‘I was making money off a cay that they owned’. She said she was a Canadian and had more rights than I did.”

Mr Cooper said he found it unacceptable for foreigners to demand that he, who is a Bahamian, to stop visiting Sandy Cay and to shut down his business operation.

“All of my stingray feeding tours are conducted on the waters’ edge and in the sea. I find it odd that these visitors believe they have the power and right to tell a Bahamian citizen to cease business operations in the manner they proposed. I found their demand preposterous and obscene to my character as a self-employed business owner and productive member of Bahamian society,” he said.

“During these encounters I remained calm and humble. I never spoke in a disrespectful manner nor did I threaten them in any way.”

When The Tribune spoke to Dr Brohammer, he said that he and his brother have been owners of Sandy Cay for the past 38 years and visit every year. He said that he is aware that the law of The Bahamas permits access to the island up the high water mark.

“It is perfectly all right for persons to come as far as the high water mark. I have no problem with that - never have,” said Dr Brohammer. However, he complained that people visiting the cay had left trash, had set fires and left them burning.

Dr Brohammer said that they did not want people on the island when they were there visiting and using it.

“I don’t want them to come beyond the high water mark because we have all kinds of camping equipment and everything else, and we had a lot of theft and destruction,” he explained.

He said they have now hired a caretaker, Kenneth Christie, of West End, to look after the island when they are not there.

“They can contact the caretaker if they have some reason to be on the island. But it is perfectly allowable for people to go up to the high water mark. There is no problem at all (with that) and there never has been for the past 38 years. We had the island over 38 years and we never had a problem with people coming up to the high water mark, and anyone that says otherwise is not being truthful,” he said.

Mr Cooper is asking the Customs and Immigration Departments to investigate who actually owns the cay and to advise the owners of the laws providing Bahamians access to all shorelines up to the high water mark.

Mr. Cooper please tell the "tattoed man" he can kiss my Bahamian ass right smack dab in the sweet spot in the centre!!

This is one of the possible results of selling the country to outsiders and I mean any nationality. Government after government has allowed and even encouraged the sale of islands, cays and tracts of land to anyone willing to pay a high enough price for it. When your own government has little to no confidence in its own people what do you expect from outsiders who see the way the wind is blowing?

They need to stop selling our country. Das what. This is not sustainable.

Whoever owns, Bahamian or foreign,If they stop you from exercising your legal rights then you can sue them for damages for your loss of business.

If you go at three quarter tide when the tide is dropping, they can't stop you from setting up a fire and all, as long as you are below high watermark. In some places the there is a lot of beach between high watermark and low watermark.

Make sure you get this clown on video, it should look good in court.

If they can own an island, they can pay all the legal costs and you for your loss of business.

I think it's a great idea. Sue for loss of business. When it hits them in their wallet they will cease and desist, or leave entirely.Good riddance.

Sadly, most of our country is either owned by foreigners or the Government ........ the ordinary Bahamian is a landless peasant in his own country ..... slightly above the shanty town-dwellers

Truthfully, who do you think owns most of the houses in Westridge, Cable Beach, Eastern Road, Sandyport? Yup, they are thousands of Bahamians.

But don't worry the "No" vote will help them move to more advanced countries with thousands of other educated Bahamians.

The foreigners, that many of the bloggers so dislike, are moving out because there are other more attractive countries to go to for them.

Also without our educated, Cuba, which is opening up, will be more attractive than the less educated Bahamian population.

And when we get down graded, when, not if, we do we will not be able to borrow money from the countries with money because we keep our women as second class citizens without equal rights.....as we say we are sovereign, so are they...no money for us.

Y'all worrying about a cay ... try driving your boat to Paradise Island ! Atlantis security will be on your a-- to leave in a hurry !