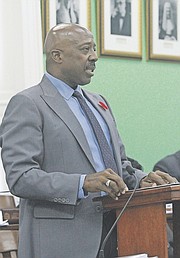 Minister of Labour Shane Gibson speaks in the House of Assembly yesterday.

THE government has received almost $1.4 million in applications submitted by persons seeking to utilise the exigency order declared in the wake of Hurricane Matthew, Minister of National Insurance and Labour Shane Gibson said yesterday. The 180-day exigency order, declared effective from October 7, allows residents affected by the storm to import certain items into the country duty and tax-free. It only covers New Providence, Grand Bahama, the Berry Islands and North and Central Andros.

Mr Gibson, the government’s Hurricane Matthew czar, said as of Tuesday the National Emergency Management Agency (NEMA) has processed 77 applications, with a total dollar value of $1,338,452.92. The applications were over $10,000 each, Mr Gibson said.

Regarding government assistance with home repair, Mr Gibson also said that following conversations with the Ministry of Finance, it has been determined that vouchers will be utilised for the distribution of materials for the Hurricane Matthew repair programme on New Providence, Grand Bahama, and North Andros.

The vouchers will be colour coordinated by island in denominations of $100, $300, and $1,000 and redeemable at approved establishments that have agreed to participate in the programme, Mr Gibson said.

He also said the government, through its fundraising efforts, has raised $1.4m for hurricane restoration, which has not yet been spent. He said the signatories on the restoration account are all members of the private sector.

Mr Gibson said the government is now into its third week of door-to-door assessments of owner occupied homes on New Providence for the repair programme, with some 2,400 assessments already completed.

As of October 21, Mr Gibson said the Department of Social Services had conducted assessments on 1,453 homes on Grand Bahama, which included 875 in Eight Mile Rock and West End, 378 in Freeport and 200 in the Pinder’s Point, Hunters and Lewis Yard areas.

Mr Gibson said three establishments on North Andros and two in Central Andros have expressed an interest in redeeming vouchers for the repair programme, adding that the Department of Social Services has conducted 367 door-to-door assessments in North Andros.

The next step for that island would be the completion of “technical assessments,” Mr Gibson said, adding that two teams have already started the process and that two additional teams will return to the island next week to complete the exercise.

However, he said the Mastic Point and Nichol’s Town pumping station remains on standby generator.

A request was made to Bahamas Power and Light (BPL) to make that pumping station a priority, Mr Gibson said.

However, Mr Gibson said Sweeting’s Cay remains on standby generator pending the restoration of electricity to that community.

On Andros, Mr Gibson said a number of settlements have had their power restored with the exception of Lowe Sound, which he said “remains a challenge.” He said there will likely be a need for an electrical inspection of the “houses still standing” before BPL can fully energise the houses in certain areas.

Regarding government buildings, Mr Gibson said the Ministry of Works has completed “detailed assessments” of six “priority” government buildings damaged during the hurricane, namely the Supreme Court on Bank Lane, the Senate building, both the Tracon and the Fire Services Buildings at the Lynden Pindling International Airport (LPIA), the Clarence Bain Building, and the Churchill Building, which he said is undergoing roof repairs.

Mr Gibson also said the Airport Authority has provided the Ministry of Finance with the requested proposal to build a new fire station for LPIA to replace the old station that was damaged by Hurricane Matthew.

In Grand Bahama, Mr Gibson said “detailed inspections” are ongoing at the Freeport Post Office, Garnet Levarity Justice and the Harold DeGregory Complex by the Ministry of Works.

He said it is expected that repairs will begin on the affected buildings “in short order.”

Mr Gibson also said Exuma and Inagua also reported some damage during the hurricane, and that local personnel have conducted “preliminary assessments.” However, he said, technical teams from New Providence will be dispatched shortly for more in-depth assessments.

Nonetheless, he said BTC has advised that as of October 31, cell services had been restored to 90 per cent of Exuma customers and 100 per cent of customers on Inagua.