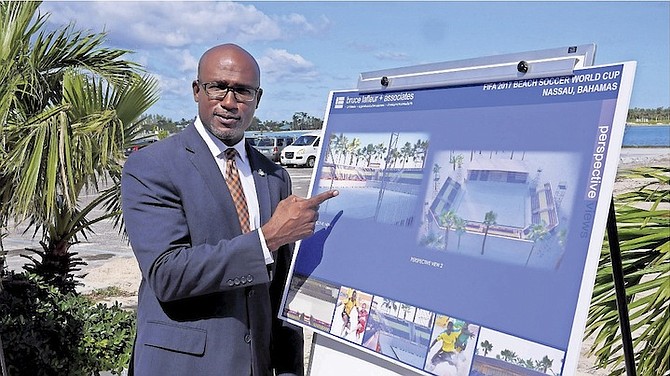 The $2.5 MILLION facility, being built at the site of the original complex at Malcolm Park West, will be capable of hosting over 3,000 patrons and equipped with a number of modern amenities.

SITE preparation and preliminary work is underway for the construction of the Bahamas’ new beach soccer complex in preparation to host several major events slated for 2017.

With the FIFA Beach Soccer World Cup highlighting the sports tourism schedule for next year, construction of a new stadium was necessary to meet the demand for the event.

The $2.5 million facility, built on the site of the original complex at Malcolm Park West, will be capable of hosting over 3,000 patrons and will be equipped with a number of modern amenities.

“Our facilities what we had on this site did not have enough capacity and was not ready for that particular event. The government, in conjunction with FIFA, decided to put this 2.5 million stadium which will house about a capacity of 3,097 persons,” he said.

“The grandstand will have VIP boxes and it will be one of the first beach soccer facilities in the Caribbean at this level.  It will be a world-class facility and hosting the World Cup means any tournament in the world can be held here. Because it’s sand, we will also be able to hold beach volleyball and we are slated to be a part of the Commonwealth Youth Games as beach volleyball and beach soccer will be played here at this facility, the best of its kind in the region.”

Work on the project is being done by Cavalier construction and is expected to be completed by the end of January in preparation for the Bahamas to host the CONCACAF Beach Soccer Championships in February.

“We just started but we are trying to make this move as quick as possible. Demolition has started by removing the infrastructure we had here prior. They will start with foundation, and have actually started with pulling together the steel. The prefabricated structure should be here November 17 and we are looking for that to arrive on island and start the facility,” LaFleur said.

“We are trying to work straight throughout Christmas holidays and are looking for our facility to be completed by the end of January. Cavalier has jumped on, got the ball rolling quickly and we will continue to keep pressing along with the process.”

In an event expected to revolutionise the sport in the country, 16 teams from around the world will be taking part in the  FIFA BSWC Bahamas 2017, hosted April 27 to May 7.

It is expected to be one of the largest draws sports tourism has ever enjoyed. Participation is being compared to the IAAF World Relays and the Battle 4 Atlantis, events that pack hotels, flood restaurants, fill taxis, drive shopping and attract an active lifestyle tourist who wants the best of The Bahamas.

According to officials, 16 countries will qualify to field full teams for matches that take place over an extended 10-day period with each team bringing a complement of 25 persons or more. Because of the length of the competition, economic benefits are being touted as in the multi-millions of dollars.

Bahamas Football Association Secretary General, Fred Lunn, said the stadium will be a permanent structure that has already set the tone for others in the region to follow and has excited the member nations preparing to compete at the venue.

“As an organisation, we are very proud to have Bahamians involved in the design and construction of the stadium. It is a permanent stadium, it will not be removed after the event is over which is a huge benefit for us in the Bahamas. The design on this stadium may be copied or duplicated in this region. We already have a request from Trinidad to look at a similar stadium as Pierre has designed for us and what Cavalier is constructing. It is the first in the Caribbean, there is one other in the region, in El Salvador, but it really doesn’t compare to what we are building here,” he said, “Switzerland has been here already and played in the old stadium a few months ago. President Sealey just traveled to Dubai doing a presentation on this facility. Jason [McDowell, BFA Vice President] and I just completed a workshop in Miami where all the presidents of CONCACAF of the participating countries saw the plans of what we re doing and they are all excited about it. They are excited about playing here but more excited about playing on our sand. We have played on some tough sand in the region. Volcanic sand we had to play in El Salvador is very tough to play on. In Europe the sand is different from ours. Believe it or not, our sand is in the process of getting approved. We have them three different samples and hopefully by the end of this month they will choose the right grain and quality of sand that we can put in this facility.”

To supplement the main stadium, a new training facility will also be constructed at Arawak Cay.

“We want this world cup to be a Bahamian world cup, so there was a discussion on where we will put the facility with FIFA the LOC and government. The determination was to put the facility right next to the fish fry so tourists as well as Bahamians can be very connected with the teams at the training facility so they will have a chance to watch their favorite teams and players prior to the event kicking off. We are getting calls from teams to come in two weeks earlier for the event and that’s a big plus for us and for them to get use to our environment and the playing surface,” he said, “We are hoping to have the facility up in December. The sand will be approved around November 24-25 and it will maybe take 2-3 weeks to have that sand acquired and that will be ready to go by December. We need it for our team to train on right now. Our boys need to be on the sand sooner rather than later.”

Official information on the  FIFA Beach Soccer World Cup Bahamas 2017 can be found at fifa.com/beachsoccerworldcup.