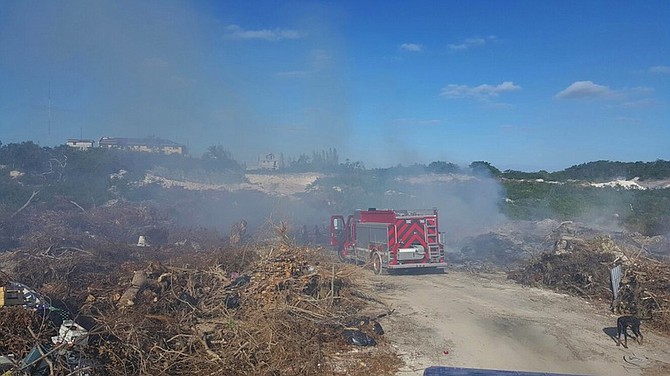 The fire in the Grey Terrance off Bernard Road.

Fire Chief Superintendent Walter Evans said the latest fire, in the Grey Terrance off Bernard Road, is threatening homes in the immediate area and also releasing harmful emissions into the air.

He said three firetrucks have been deployed to the area, which was being used as a dumping ground, to battle the blaze.

"This is not the first time we have had to fight a fire in this area," Supt Evans said.

"It is a very large area that people have been using to dump derelict vehicles and old furniture and stuff and it got worse after the storm, persons began dumping old trees and things there. A number of homes in the general area are being threatened but its the smoke we are more worried about. There is a lot of smoke and we are trying to suppress it before it has a serious effect on the residents."

Meanwhile, Supt Evans said firefighters are continuing to battle a blaze in the Lyford Cay area and have now carved a temporary path in order to reach the blaze, which is burning a few hundred feet into the bushes.

He reiterated that, at this time, the fire poses no immediate threat to nearby homes in the Lyford Cay area and surrounding western New Providence communities.

Supt Evans said he hopes, now that a path to the fire has been created by heavy duty machines, the fire can be extinguished "very soon".

He is asking residents in the area to be patient, as his team attempts to put out the blaze. The fire has been burning for three days.

On Thursday, Supt Evans said the only threat to residents in the area is the smoke; however, because of wind shift, he said that issue will also subside.

Residents of Lyford Cay and nearby communities reported on Wednesday evening that the air was thick with drifting smoke from the fire, which appeared to be emanating from somewhere behind the Old Fort Bay shopping centre.

I reject the argument that MP's "must" steal because their salaries are too low. Exactly what is "not too low"? 100,000? Ok, if I charge one contractor 5,000 per month to grant them a contract, over the course of the year I earn 60,000 from ONE contractor. How many contracts would I grant in one year? Let's say at least 20. So with my tiefin lazy ways I've given myself a 1,200,000 salary. Is that what we should be paying an MP? Or should it be more? For standing up on behalf of the good people of their constituency without ever consulting them, for mechanically banging on desks in parliament and for voting for bills they never read or understand.