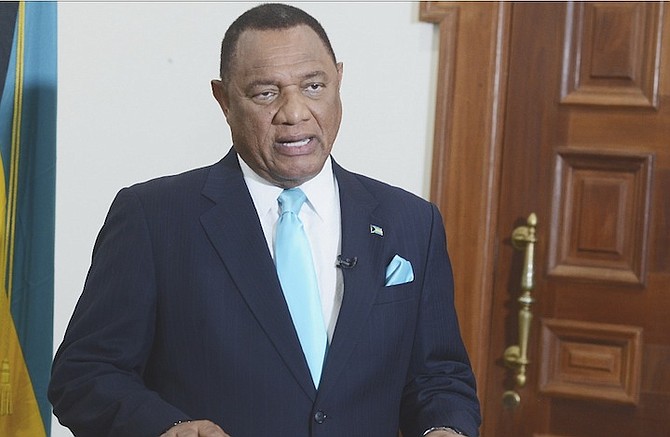 PRIME Minister Perry Christie emphatically stated yesterday that the proposed $2.1bn agri-fisheries venture with Chinese investors at the centre of widespread public controversy would never have been approved by his government.

Mr Christie spoke directly to the infamous proposal as he pushed back against claims from the Official Opposition that the government’s bid to establish a select committee to investigate the sale of BTC was a diversion tactic.

“We do not do that in the Bahamas, and I keep on saying you cannot have a debate where you miss the fact that it did not happen. Therefore, you are attributing to the government in debate what could have happened if the government had agreed, and you’re planting in people’s mind and this is more than disingenuous, it is a commitment they have made to trying to exploit an issue that is a non-issue.”

The proposal reportedly projects a $2.1bn injection into the local economy over ten years through an equal partnership between Bahamians and the People’s Republic of China. The proposal also reportedly included the option to lease 10,000 acres of Crown land in Andros.

Agriculture and Fisheries Minister V Alfred Gray has admitted that he gave Bahamas Ambassador to China Paul “Andy” Gomez the go-ahead to have discussions on the proposal, but has stressed that the matter is not before the government for consideration.

Mr Gray has said the ideas put forth in the proposal, which was leaked to the media, came from Mr Gomez and not Chinese investors.

The proposal has been condemned by various local and international environmental lobby groups, who raised concerns over sustainability, and sovereignty in light of China’s grisly environmental record.

Montagu MP Richard Lightbourn yesterday questioned why Mr Gray would encourage further discussion of the proposal if there was no intention to agree to its terms.

“Why would the member for MICAL waste the time and effort of the government and government officials to negotiate with a government when you’re going to say there was no intention whatsoever to give them fishing rights?” Mr Lightbourn asked.

“Well then why are you negotiating it? Why are you even discussing it? If that is the case it look like the member for MICAL went out on a limb, carried out his own agenda, I would have thought in those circumstances if he had no permission from the government to even discuss this, he should be dismissed.”

Defending his administration over the controversy, Mr Christie said: “It has become a matter of urgent and extreme importance that the other side is using to exploit emotions in this country. The government of the Bahamas has fastidiously committed itself to protecting the waters of the Bahamas for Bahamian fisherman, full stop, no further.”

Mr Christie explained that every minister - within his portfolio - had the right to explore opportunities to advance the country. He noted that some government MPs were philosophically and fundamentally opposed to foreign involvement in both farming and fishing.

“We are not going to compromise and no discussion will lead to a conclusion that this government would have contemplated or agreed for that to happen,” Mr Christie said.

“A minister in association with anyone could explore opportunities for the Bahamas but he has to bring that as a proposal to his colleagues, who will make a determination as to whether they would agree,” the Prime Minister added. “That’s my side, that’s their side (Opposition), that’s how constitutional government works and my government would not have agreed to that in any event.”

Last week, Lisa Benjamin and Dr Adelle Thomas, assistant professors and co-founders of the Climate Change Initiative at the University of the Bahamas, said that significant gaps existed in the Bahamas’ commercial legislative policies. The lecturers posited that gaps were so great that it was hard to imagine that the “scale of commercial fishing and processing enterprises anticipated by the proposal would abide by the limits currently set out in legislation”.

The professors said without regulations on matters such as catch or vessel sizes, or the capacity to enforce any of those restrictions, the Bahamas could join the “long list of failed fisheries sectors” in the Caribbean “well within a ten-year period”.

Like he promised us about other things? He is likely to do as in their best interest. . .friends, family and lovers that is! He knows that he and his party members in the house will be "runned" out of this country into exile. . .THE PEOPLE HAD IT WITH HIS AND OTHER MEMBERS OF HIS GOVERNMENT'S WANTON "ROGUE-ISH-NESS" IN DEALING WITH MATTERS OF STATE AND ARROGANT NON-ACCOUNTABLE ATTITUDES WITH THE PUBLIC!

THEY ARE NOT STUPID. . .THEY KNOW THE TIME!

What a load of baloney! This is Christie trying to play cute. Does anyone HONESTLY believe that the Prime Minister and other senior figures in Cabinet had no inkling of this well developed proposal? Yet again he tries to treat the electorate like dummies. A likely scenario is that this was part of the wider deal between China and the government over Baha Mar. Christie knowing that neither he nor his government could afford to be associated with such a treasonous deal this side of the election, could have set up the hapless Alfred Gray to be the fall guy in the event of the deal being leaked. This is how the Mafia operates. The 'Don" orchestrates but is never directly linked to "the crime".

THEN WHY DOESN'T CROOKED CHRISTIE FIRE CABINET MINISTER GRAY AND RECALL THE AMBASSADOR HE APPOINTED TO RED CHINA! Crooked Christie has become so damn crooked that he can't even lie straight anymore!!

The fire under Christie's genitals is getting hot so he is claiming ignorance. Let him come and March on Black Friday if he is so innocent. Get right in the freakin middle of the throng ! And please nobody walk on him !

Mr: Christie I know you would never approve others fishing in Bahamian waters thus the purchase of the defense force boats. But i do fault you for taking so long to address the issue. while those of the "Chicken Licken " syndrome had a field day.

He probably had to clear the speech with Gray first, just like Reneard Wells. Can't have them incensed and saying who told them to do what

And he as the PM tells us that he did not know about the deal. . .would never approve it. . .but still allows it to go on. . .by a rogue minister and ambassador? This man is quickly moving towards an ignoble end. . .HE IS LOST. . .I hope he is just plain lost and not trying to lie to us again like he did with the numbers and equality votes! WHAT THE HECK WE HAVE GOTTEN OURSELVES INTO WITH THIS GOVERNMENT?

Perry lost the electorates trust and all political currency with the gambling referendum fiasco, reneging on his "we believe in Bahamians" and "Bahamians first" promises and scuttling Sarkis with Baha Mar.

NOBODY will ever trust Perry Christie again with anything!

Comrades! All the proposed $2.1bn agri-fisheries deal has done is make the PM angry that someone gone pulls the fire alarm bell on the Chinese deal.
I thinks the people are intelligent enough to know there would have been dozens Chinese crewed fishing boats plowing Bahamaland's high seas, had that fire alarm warning bell not sounded.
The soundest pre 2017 General advice I will offer the PM is to pray seven times daily that V. Alfred and the entangled Ambassador switches over to the Red Movement - for cover as was given to Renward and his $650,000 (yet to be explained) Letter of Intent - although the Red Movement's Talkie Show Host Candidate, says he's 100% satisfied with Renward's explanation(s)?

So why open negotiations if it is dead before birth? Another total non sequitur from this incomprehensible fabricator.

This bad deal should not be negotiated