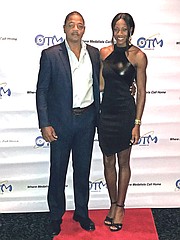 FOR the second consecutive year, quarter-miler Shaunae Miller has been named the On Track Management’s Female Athlete of the Year.

Miller, 22, repeated as champion during the awards presentation in Atlanta, Georgia, on Saturday night, at the same time that she was selected as the Ministry of Youth, Sports and Culture’s Athlete of the Year.

The event, which was held before more than 100 corporate executives from the Greater Atlanta area, also saw Steven Gardiner receive a citation for the role he played as a member of the Bahamas men’s 4 x 400 metre relay that picked up the bronze medal at the Olympic Games in Rio de Janeiro, Brazil, in August.

Miller, the toast of Team Bahamas after her stunning gold medal performance at the games in the women’s 400m, shared the top honours with Omar McLeod, the Jamaican gold medallist in the 110m hurdles at both the IAAF World Indoor Championships in Poland and the Olympics.

“I am very thankful to God for being able to receive the On Track Management Athlete of the Year award,” said Miller, who shared the honours ceremony with her father Shaun Miller. “I was up against an outstanding group of athletes within OTM so I am happy to share the honours with Omar McLeod.”

For Gardiner, a native of Abaco, he was just pleased to have been recognised.

“I appreciate the gesture by On Track Management to recognise the efforts of its athletes,” he said. “As a result I am delighted to be recognised for my medal-winning effort in Rio.”

Miller and Gardiner, trained by different coaches, are under contract with the same management team, OTM. Claude Bryan, who heads the organisation, said with the 2016 season now behind them, the focus is on 2017.

“They will have minimal indoors at best, but they will be visible early in the outdoor portion of the season,” he said.

Miller, coached by Lance Brauman, said she has two objectives for the new year and they are “staying healthy and making my fellow Bahamians proud of me.”

Gardiner, trained by George Cleare, the head coach of the Olympic team, had similar sentiments when he uttered that he wanted to “develop consistency in performances in the 400m and have a healthy season.”

On Saturday in the Atlantis ballroom on Paradise Island, Miller was selected for three awards, including the Prime Minister’s Award for National Pride, the overall Female Athlete of the Year and the Bahamas Olympic Committee award. In addition to training and competing next year, Miller has also announced that she intends to get married to her fiancé Maicel Uibo, a decathlete from Estonia whom she got engaged to this year.