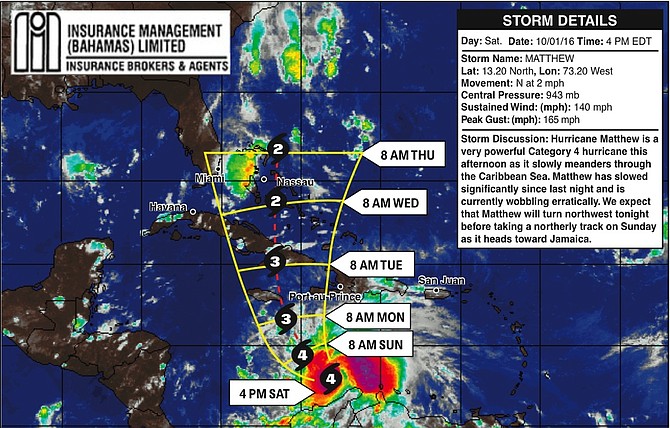 A HURRICANE Watch is in effect for the south east Bahamas, including Mayaguana, Inagua, Crooked Island, Acklins, Ragged Island, Long Cay, Samana Cay, and the Turks and Caicos Islands from Sunday morning.

A Hurricane Watch means that hurricane conditions could affect the alerted islands within 48 hours, the Bahamas Department of Meteorology said.

Extensive to severe flooding can be expected as Matthew is forecast to produce up to 25 inches of rain as it passes through the Bahamas. Small craft are advised to seek safe harbour.

A HURRICANE Alert is in effect for the Bahamas and Turks and Caicos Islands, the Department of Meteorology announced on Saturday night.

The US National Hurricane Centre (NHC) said Matthew was expected to drop potentially "life-threatening" rainfall in Haiti along with gusting winds and dangerous surf in the poverty-stricken nation and other parts of the Caribbean.

Hurricane Warnings were issued for Jamaica and most of Haiti on Saturday night as Matthew barrelled toward the coast. The storm wasn't expected to make landfall until Monday, but the NHC warned that time was running out to prepare for Matthew's arrival.

Tropical storm conditions would hit Haiti and Jamaica on Sunday, the NHC said, "making outside preparations difficult or dangerous. Preparations to protect life and property should be rushed to completion."

Southern Haiti could expect more than 15 inches of rain, with up to 40 inches in some areas, while 20 inches could fall in Jamaica.

In Jamaica, high surf began pounding the coast and flooding temporarily closed the road linking the capital to its airport. Carl Ferguson, head of the marine police, said people were starting to heed calls to relocate from small islands and areas near rural waterways.

Storm surges in Jamaica could reach two to four feet above normal tide levels, while in Haiti they could reach five to eight feet, according to the centre. And in Cuba, the storm surge could swell to 11 feet.

Parts of Cuba and the Dominican Republic could expect up to 25 inches of rain, which could cause life-threatening flash-floods and mudslides.

What type of country are we living in? Really? One of the most major hurricanes in a decade is headed our way and half the power is off. Phone and Internet service with BTC is in and out and no one seems to have taken the decision to alert Bahamians and residents so that they will take this storm seriously and get prepared!

This can't be correct They are saying Some parts of Haiti will get 40 inches of rain.

That's what they are forecasting even from the States. Take care and Be Safe! Prayers sent for safety for all!

Listening to Perry conduct an exhaustive press conference on ZNS ............. he is never short on words ............. but just check back with the script and compare the results in six months