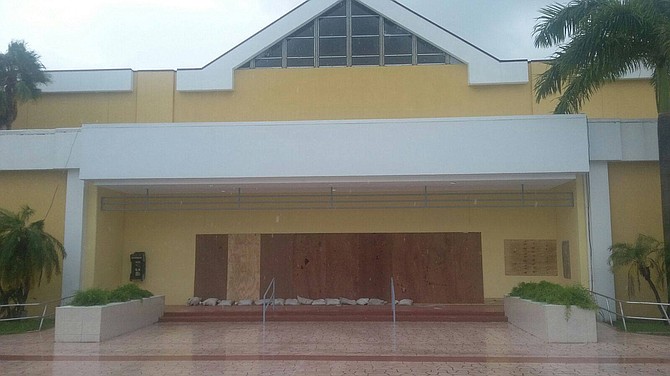 THE National Emergency Management Agency (NEMA) is revising its list of shelters in New Providence, noting that the C R Walker Senior High School on Blue Hill Road has been compromised.

NEMA is re-directing people to use the Church of God of Prophecy on East Street instead.

NEMA has also designated the Kendal Isaacs Gymnasium as a shelter during Hurricane Matthew. The gym opened today, accommodating six families at the time, according to NEMA. The gym is capable of accommodating 460 people.

"Royal Bahamas Defence Force Acting Commodore Tellis Bethel has confirmed that 12 marines have been posted there as shelter managers and will assist the National Sports Authority in managing the hurricane shelter for about four days or until the all-clear is given by the Met Department," NEMA's statement said.

"The Kendal G L Isaacs Gymnasium and the T A Robinson National Station fall under the management of the NSA. The national stadium, which has the capacity to hold 400 people will serve as a second hurricane shelter if the need arises. Venue Manager for the Kendal Isaacs gym is Arthur Thompson and Lawrence Hepburn is venue manager for the T A Robinson National Stadium. NSA General Manager Jeffrey Beckles said all the requirements are in place at the facilities to house residents who live in low-lying areas prone to excessive flooding. He said however that people presenting themselves to the shelter should follow the typical shelter rules such as having a three day supply of water per person," along with:

NEMA added that washrooms with showers and a dining area have been set up in the gym.