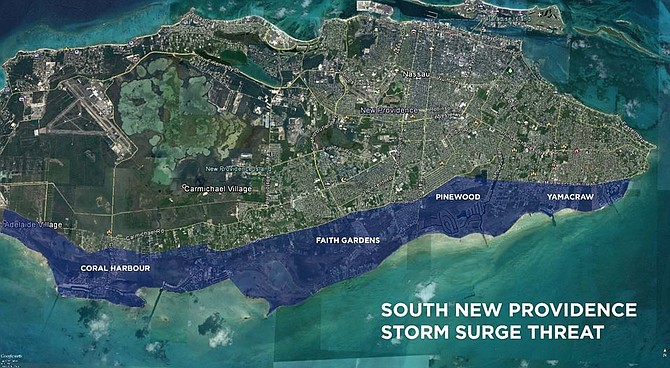 RESIDENTS in low-lying areas of southern New Providence and in Lyford Cay and Old Fort Bay are being "strongly advised" by the National Emergency Management Agency (NEMA) to evacuate and seek the nearest hurricane shelters because of potential excessive flooding posed by Hurricane Matthew.

According to the Bahamas Department of Meteorology, residents in low-lying areas and on coastal roads should contact their local district administrator or NEMA office to make arrangements for relocation to a hurricane shelter before the onset of the tropical storm force winds by 11pm on Wednesday.

The combination of a dangerous storm surge and large and destructive waves could raise water levels by as much as 10 to 15 feet above normal tide throughout the Bahamas. It is also projected that storm surges will occur 10 to 15 feet.

The areas vulnerable to excessive flooding and storm surge as Hurricane Matthew, expected to be a Category 3 storm, treks across the Bahamas, with a direct hit for New Providence, are:

Why is NEMA just now 'advising' this??

While the advisory for the southern coast may have been timely, posting this around 9:30pm (after some areas had already experienced issues with their current) to now include additional areas, such as Lyford Cay and Old Fort, is a tad late, no?