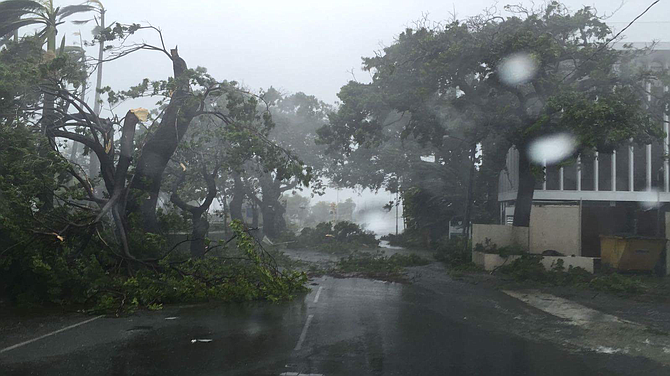 The scene on East Bay Street near the Paradise Island bridge on Thursday morning, with trees down and blocking the road

NEW Providence will now be without electricity for the duration of Hurricane Matthew, and maybe some time after, following a controlled shutdown of power services by Bahamas Power and Light (BPL) early Thursday morning.

BPL's Corporate Communications Manager Arnette Ingraham told The Tribune that, as of 6am, supply had been suspended to most customers in New Providence. She added that power would not be restored until the "all clear" is given and technicians are able to carry out initial assessments.

Mrs Ingraham said: "Once we complete those assessments we will begin restoring supply and we will keep you guys informed of our progress."

BPL executed a controlled shutdown of the company's high risk areas in New Providence around midnight, following issues in a number of areas. Mrs Ingraham said BPL received reports of sparking lines and transformers, which resulted in the immediate suspension of supply to those areas.

She added that BPL worked to maintain power in other areas for as long as it thought safe to do so.

On Wednesday BPL said it would begin controlled shutdowns in some areas around midnight when the island began to experience tropical storm like conditions. Other parts of the island were scheduled for power cuts as early as dawn today.

Despite that promise however, a "system disturbance caused a loss of power supply to about 60 per cent of customers" on Wednesday night, the company said in a statement.

Turn this company back over to Bahamian management. More than 12 hours after the storm and the entire city is still dark. These people are inexperienced incompetent and generally lousy