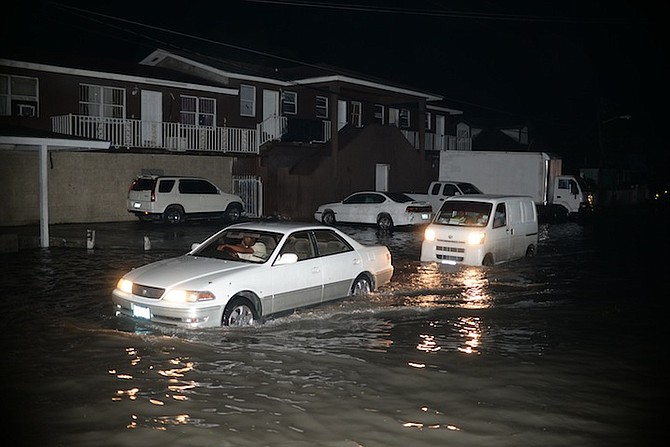 AS A result of the “horrific” and “life-endangering experiences” during the passage of Hurricane Matthew, Prime Minister Perry Christie said the government would enact legislation to force people to evacuate their homes and communities during major hurricanes.

Mr Christie also said the government will empower the Prime Minister, the Commissioner of Police and the Commodore of the Royal Bahamas Defence Force with the ability to declare a state of emergency. Currently only the head of the National Emergency Management Agency (NEMA) can make such a declaration - a responsibility Mr Christie said is “too great” for one person.

At NEMA’s headquarters on Sunday night, Mr Christie said too many people decided to stay at home and protect their property as Hurricane Matthew pummelled the Bahamas. This move, he said, not only put their lives at risk, but also the lives of rescue service personnel.

On Tuesday, Commissioner of Police Ellison Greenslade and NEMA officials “strongly advised” residents in low-lying areas and on coastal roads to evacuate and contact their local district administrator or the NEMA office to make arrangements for relocation to a hurricane shelter before the onset of the tropical storm force winds by 11pm on Wednesday.

However, on Friday, Commissioner Greenslade said nearly 500 people had to be rescued from their homes in eastern and southern New Providence as flood waters began to rise more than four feet.

“Now I say this, notwithstanding the warning that they were given, many people elected, maybe with good reasons, to protect their homes,” Mr Christie said. “I thought at the time the Commissioner went to great lengths to even frighten people into the reality that they were facing by telling them some of them will have to go in the loft for protection. That, in fact, happened and by saying they would have to punch their way to the roof.

“We now know as a result of this experience that we have to be in a position to require people to evacuate certain areas. We see the provision in the law in the United States. We know it is in the law here but we need to ensure that it is in place because people risk their lives in going out.

“The Commissioner can tell a story about when he and his colleague went out to rescue persons and when they got out they had some concerns about their safety and whether they had gone too far. As a result of my determination, The Bahamas cannot approach these situations the normal way.”

Mr Christie also said NEMA has to be “strengthened significantly” because the aftermath of Hurricane Matthew is “too enormous for the current structure of NEMA”.

He added: “I am also firmly convinced that (declaring a state of emergency) is too great a responsibility for the director of NEMA to exercise by himself and the Prime Minister of the country, the

Commissioner of Police and the Commodore of the Defence Force must have a shared approach to determining whether the conditions in the country are as such that a state of emergency should be declared and that requires an amendment.

“NEMA has to be strengthened considerably and so we are mandated to incorporate a larger team immediately because we cannot wait on the normal way in doing things and getting out there to people who are suffering.

“People are questioning whether their electricity should be cut on and therefore again we want to be able to have NEMA strengthened considerably to be able to let the people of this country know that we are not just making assessments but we are delivering on services to them.”

Mr Christie also announced that the government has issued an exigency order, effective on Tuesday, to allow for specific tax exemptions on goods imported for rebuilding purposes as well as water, tarp and some “personal items”.

The Prime Minister also said that given the economic cost of this disaster, which came a year after Hurricane Joaquin devastated the southern islands, the government is exploring the option of issuing a hurricane recovery and reconstruction bond.

Another damn law that won't be enforced or followed...you'd think they'd give up making laws...

Looks like PM wants Bahamas to become little USA! Sounds like his power trip is getting way out of control.

if crime wasn't so bloody bad people might have been inclined to leave their houses. . . even to save their own lives?

There should be PUBLIC NOTICES like traffic signs (say in orange or blue) stating that it is an evacuation zone or to be used as an evacuation route and each neighbourhood should be aware of what to do in a time of crisis.......... For example - people in a South Beach neighbourhood should know if they have to evacuate, what road(s) they should use and the shelters that they should use in "safe areas"............ but we rely on family, churches and politicians to inform our decision-making and not the experts & planners (even in crises)

I won't rely on the "experts and planners" in NEMA to direct me to the food store. All talk, showmanship after the storm, and no action. How could relief goods from Cayman be rejected by Customs and almost sent back. You would think that NEMA would have placed Customs on notice of how to handle disaster donations. How ignorant is Customs and the Officers who almost sent these items back? Does anyone out their have a clue?

NEMA is a quasi-government organization ............ its decision-making SHOULD be informed by experts and planners ........... but it seems that Russell (NEMA) is being directed by the politicians ........ just like BEC, PHA, BOB, CBOB, NIB, Bahamasair etc ...... these organizations seem to not be able to implement or direct their mandates without the politicians giving them instructions

Evacuate?? Never happen! If you leave your home there will be nothing left to return to---Either the Hurricane or the crooked vultures will carry it away!

I know someone who hauled their boat out on a trailer...put it in their yard...once they came out after the storm had passed someone had stripped the engine off of the boat. Evacuate my a$$!!

Mandatory evacuations laws does not necessarily mean the government can force persons to leave their homes in the case on an emergency or imminent danger. What is does mean is that once a person is informed of an evacuation order and the reasons for it and still refuses to leave the area he takes responsibility for his own life and safety and for that for any others he convinces to remain with him. There will be made aware that there may not be any rescue efforts available as the danger or threat is in effect. No one will risk their life to save them. Some states in the US have residents who refuse to leave an area under mandatory evacuation to sign a form indicating that they have been informed of the lurking danger and that they refused to leave This helps prevent lawsuits against the state and emergency or rescue personnel and it can make insurance claims from persons who may have been injured or for persons who lose their lives null and void if not near impossible to collect. Then there will also be the question of property damage. Seeing that the person did not leave when requested to do so did he take the necessary steps to secure personal property or to minimize damage to other property like vehicle that get flooded for example.

Then one must also how and when to issue evacuation orders. Take for example students who were evacuated from Jamaica and were brought to Nassau almost getting a direct hit from the hurricane. The same happened to residents of some family islands that were not affected by the hurricane. And so as not to appear to be laying blame, many thousands of persons were evacuated from South Florida only to go further North and directly into the path of the storm. Some lost their vehicles in floods and others had to run out of hotels where roofs blew off or windows blew open during the storm.

Thirty Four people have died from Hurricane Mathew in the US. Seventeen of the deaths occurred in North Carolina which is more likely a State the person's evacuated to to avoid. There were no deaths in the Bahamas. The toll for Haiti keeps changing: a popular low figure of 300 and an extremely high number of 900 people. Will the real figure ever be known?

John, you make some very good points about mandatory evacuations (that are predicated on certain other laws that we lack) ............ Bahamians have developed a high IQ on how to survive hurricanes .......... Just pick up and read a few of Wayne Neely's books on hurricanes to understand how and why it is that Bahamians seem to be able to escape death by hurricane (minus God's providence) .......... we were where Haiti is still today over 60 years ago ........ and where half of the USA is still ........ just think back to Katrina and Andrew

Did Government or NEMA have secure locations for people to evacuate to? How were they publicized? With crime the way it is, home owners are so reluctant to leave their property. Can't blame them...

need to be careful with these 'knee-jerk' responses. can give rise to badly written laws which may be abused in future for other purposes.. what this experience does highlight is the impotence of our legislative bodies.. not a single worthwhile piece of law-making is discussed proactively.. always need a crisis of some kind to trigger a response..

All they've done for the past four years is jerk us around. The 100 million dollar BAMSI project was a result of someone whispering in the PM's ear and off he went with his signature. I wonder if he's realized as yet that he could have given 100,000 in scholarships to the UWI School of Agriculture and accomplished the same thing. Carnival another knee jerk, someone whispered and they flushed 10 million, that they admitted to, down the toilet. The Bahamar liquidation, the most disastrous knee jerk to date. In fact the administration of the last four years seems to be full of jerks.

With acres of banana and papaya destroyed, 10 million in losses from carnival and no money to assist with the Matthew devastation, hopefully the PM understands the underlying concept of trade off analysis. Not every good thing is the best thing, at this time. Stop building on sand.

Sheep runner you may be right. The death toll in the USA is now up to 36. There were 19 deaths in North Carolina and at least 28 of them happened when persons got in their vehicles and tried to drive through flooded areas. They either became trapp in their cars and drowned or were washed away by overflowing rivers. In Haiti most persons are killed by mudslides which itself is caused by the cutting down of trees on the mountain slopes. In passing NEMA has delivered over 5 million bottles of water in the US and delivered over 1.5 million hot meals. Here some people haven't had warm meal since Tuesday of last week or had a bottle of cold water.

Bahamas will also see many similar headlines when PLP and FNM are removed from governance May 2017!