Relief is on the way to badly-damaged Andros 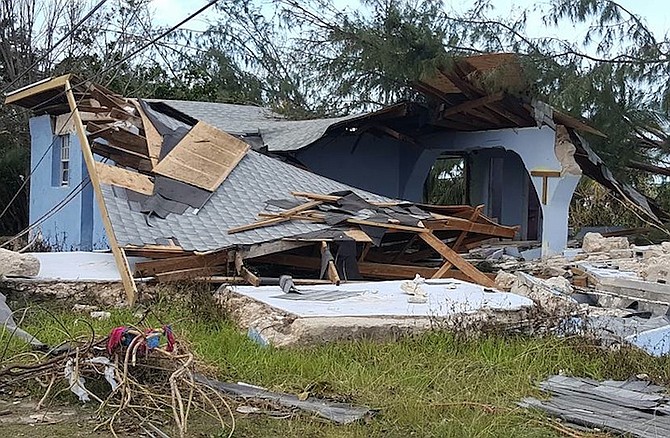 Senior Deputy Administrator Ivan Ferguson told The Tribune yesterday that cell service in his district was intermittent, with only “little pockets” of connectivity.

When he spoke to The Tribune on Tuesday afternoon, Mr Ferguson was on the road distributing food supplies - which he said were sufficiently stocked to meet the needs of his district. Based on preliminary information, he estimated that some 40 persons had been displaced by the category four hurricane.

Food supplies are running low in Central Andros; however, as officials await the arrival of relief from the National Emergency Management Agency.

Deputy Administrator Cleola Pinder told The Tribune on Tuesday that water, food, and cleaning supplies topped the list of priority needs for residents in her district. She noted that the island had received fuel but no food supplies.

The island gets weekly supply shipments on Friday, and having missed last week, Mrs Pinder said store shelves are scanty. Notwithstanding the shortage in stores, Mrs Pinder pointed out that some residents would not be able to purchase food after so many days without work.

“We still haven’t gotten any food supplies,” Mrs Pinder said. “[Food] It’s low, we’re just waiting to get supplies from NEMA. We need water, food items, because we have cosmetic damage here mainly. You had a few persons where they really lost the total roof, but for us the issue is the food supplies, water, cleaning supplies.

“Before the storm, everybody would have purchased items so all the shelves are scanty. No boats have come in on the island, and our boats come in on Friday so you would be out of the necessities very quickly by Tuesday even if there wasn’t a storm.”

“Some people just don’t have anything,” she said. “The base AUTEC employs some 200 locals. This will be their second week they haven’t worked. They evacuated Sunday (October 2), they still haven’t brought staff back because they’re not fully operational. They’re not getting salary so with no income even if foods come in on the island, there is no money to purchase.”

When Mrs Pinder spoke to The Tribune at 1.30pm on Tuesday, she said that she had already made requests to NEMA concerning the food shortage and was awaiting a response. She said that BTC brought in some food supplies and had been distributing it at their headquarters that morning.

On the matter of electricity, Mrs Pinder said Bahamas Power and Light (BPL) expected to have the district fully online by next week.

“Love Hill got power [Monday] around 10.30, 11pm. So residents on the main road up to Love Hill have power. Portions of Fresh Creek, Calabash Bay, they’re working to restore as far as Behring Point but they have two poles that they need to deal with that’s hindering them coming on.

As for Stafford Creek and Blanket Town, Mrs Pinder said that an effort was being made to tie those settlements into the grid in North Andros.

“We didn’t have any serious damage,” Mr Knowles said. “We only had some trees fell down in the road, and the Ministry of Works has already cleared them. We’re really gracious.

“I wouldn’t say we have a food issue, it’s just because the (mail) boat ain’t come so the stores don’t have a lot of things that you really need.

“People were preparing for the storm, when they heard the hurricane was coming they stock up but that’s been two weeks since the boat hasn’t come, so the cupboard getting empty now. So we really need the boat.”

In North Andros, the farms at the Bahamas Agriculture and Marine Sciences Institute (BAMSI) sustained most of the damage.

“Especially the banana crops,” said Agriculture and Marine Resources Minister V Alfred Gray. “The school itself suffered no damage at all. The animal shed lost some sheeting to the roof that will hopefully be replaced [Tuesday]. We lost all the banana crop. We have to almost stop production and start over again.”

Mr Gray said that an assessment will be done within the next few days to determine the monetary value of the losses.

It will be a real test and a potential embarrassment to the government if the recovery of Andros is ineffective or degraded ............. that is the PLP home base (similar to Long Island and LBT last year) ............. we will be watching as the relief efforts unfold in Andros