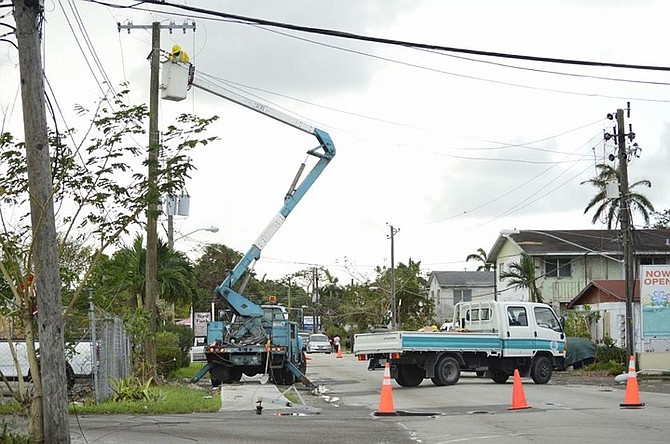 Bahamas Power and Light crews at work this week. (Photo from BPL's Facebook)

DESPITE more than 5,000 households left without electricity after the passage of Hurricane Matthew 12 days ago, Bahamas Power and Light (BPL) executives say more than 80 per cent of residential customers in New Providence have been restored to supply.

In fact, BPL said with the help of local contractors, two teams from PowerSecure and two from the Caribbean Electricity Utility Services Corporation (CARILEC), the company is aiming for “full restoration” in New Providence by the end of the week.

In a press statement, the company said despite the inclement weather, crews have been making significant progress in some of the hardest hit areas of the island, such as Pinewood, Elizabeth Estates, Yellow Elder Gardens and Marshall Road.

“BPL crews in conjunction with local contractors, CARILEC teams, and PowerSecure teams have substantially ramped up the pace of restoration in New Providence,” BPL’s statement said.

“However, company officials say as they move closer to full restoration they expect progress to be a bit slower as they estimate that more than 5,000 customers in New Providence either have individual supply issues or supply issues affecting a few area streets. BPL says that starting this week they will be aggressively targeting these types of supply problems,” the statement said.

In areas that experienced significant flooding, BPL said the home has to be declared “water free” by a designated Ministry of Works electrical inspector before power is reconnected.

However, the company is reminding its customers that despite doing work in those areas, “there is the potential that some customers may not have their power restored right away”.

My parents in Lyford Cay are still without power in case anyone thinks BPL's restoration efforts favour those in the more well-to-do communities.

Why do they keep giving these outrageous percentages to make us this they are making huge progress? Stop it already. 80% of people are still complaining. If 80% of electricity was restored the talk show hosts and social media would not be so crammed with complaints.

By the way, I'm in Shirlea and my lights are STILL off!