Radar Could Not Track Rainstorm 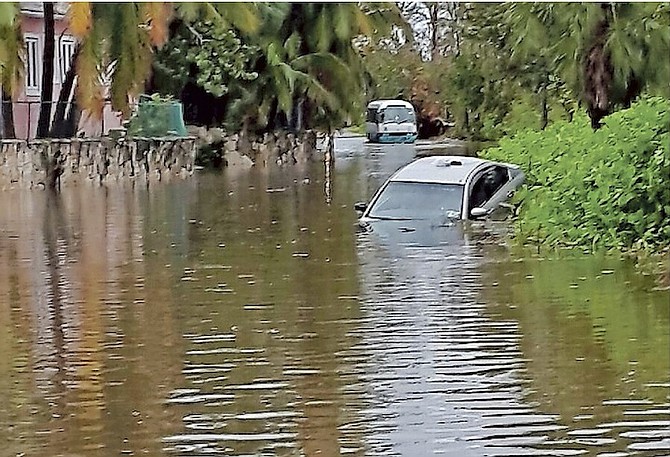 Flooding on West Bay Street yesterday leaves one car very much the worse for wear after it is almost submerged as waters rose following torrential rainfall. The scene pictured is near the Sun Fun resort, and the airport road was reported to be almost impassable.

AS a weather system brought heavy rain and flooding to New Providence yesterday, a senior weather official said the Department of Meteorology’s radar was not working, meaning there was no way to tell how bad the flooding was or which areas received the worst of the rainfall.

Senior Meteorological Officer Greg Thompson also told The Tribune that despite the significant damage sustained at the Department’s Forecast Office during the hurricane, forecasters were still forced to work in the building despite a portion of the roof having collapsed, severe flooding and several windows being broken.

Earlier this month, Department of Meteorology Director Trevor Basden admitted that the Doppler radar “came off its gears” during the passage of Hurricane Matthew.

However, Mr Basden at the time said if any other systems developed, meteorology officials would have to use “other meteorological tools” in order to “ascertain the weather”.

Mr Basden also said the staff would be relocated to the Lynden Pindling International Airport (LPIA) for safety reasons, but Mr Thompson said that has not happened yet.

“Currently there is nothing painted on the radar, it is not working, we cannot see anything,” Mr Thompson said yesterday.

“So we cannot determine where the rainfall is, we cannot see that on the radar, we are using Miami’s radar but that only reaches so far. No echoes on the radar. I do not know if the technicians have been made aware, but as it stands the radar is not working. We have significant flooding.

“This place (the Forecast Office) is unfit for staff members to be performing their duties in now, it’s an occupational hazard. The story for the last umpteen years is that we are going to be moving and it hasn’t happened yet. The directorate, in my humble opinion, is responsible for this, they have not made the case or been aggressive enough to get us out of this building.”

In reference to the heavy showers in New Providence yesterday, Mr Thompson said the weather disturbance is being caused by a surface trough interacting with an upper level low as well as a disturbance extending from one of the outer bands of Hurricane Nicole.

There were reports that the system left three to four inches of water in low-lying areas of New Providence yesterday.

Mr Thompson said the heavy showers are expected to last through Wednesday and the “bull’s eye” of the storm is right over New Providence, North Andros and Cat Island.

“Environmental conditions are currently unfavourable for any significant development to occur but they could become more conducive by Tuesday or Wednesday as the system drifts to the east,” Mr Thompson said.

“Regardless of development, heavy rain will be possible over the Bahamas during the next couple days. This is going to be here until Tuesday the earliest, Thursday the latest. There will be significant flooding in low-lying areas because of the continuous rainfall and since we just went through Matthew this will only cause more problems.”

Last week, Transport and Aviation Minister Glenys Hanna Martin said that a phased acquisition of new “state-of-the-art” radars will not start until next year.

Mrs Hanna Martin explained that her ministry was in talks with the Ministry of Finance over the major expenditure, adding that the matter has been prioritised given the critical nature of weather services.

The Doppler radar provides details on rainfall intensity, thunderstorms, and tornadic activity including waterspouts effectively within a 150-mile range.

The most amazing thing about this government is you don't know where to start the outrage.Maynard, Dorsette, Gibson, Davis, Fitzgerald why are they constantly in the center of some disastrous bungle?

Why is that car in a hole? It's been two weeks since the storm passed.

Glenys Hanna Martin's incompetence is only over shadowed by Christie's own incompetence in keeping her on as a cabinet minister. This woman only got where she is through gross nepotism (her father is A.D. Hanna) and her obvious incompetence over the years has cost our country millions and millions of dollars. The voters in her constituency are much worse off today than they were when she was first elected to represent them and hopefully will show her the door in the next general election. Glenys always had a loud mouth on her, but never had much between her ears.....just ask anyone who attended Queen's College with her many years ago....absolutely nothing has changed or will ever change about her. Christie continues to demonstrate very poor judgement by keeping her in his cabinet as nothing but a loyal lackey with no other redeeming features whatsoever.

Comrades! Playing that old problems with da radar tune...again...how radar never seems work as its installation intended. Or, as in the deadly crash that claimed the lives of Dr. Myles and others on the approach to the "no radar has ever been installed" at the Freeport Airport. Maybe now that the PLP cabinet just agreed hand over $200 million via the non-collection of taxes payments into the Peoples Public Treasury, you'd think the privately owned Port Authority would at least step up to the plate to invest a few thousands dollars into a Radar System at their private corporation's run city of Freeport's, Airport?
Let's skip opening a discussion about the either non-functioning radars, or a complete absence of radars at airports scattered throughout the islands of the Bahamaland.

Martin has been talking about radars for the past fifteen years ........ both for planes and Met ........ and still no resolution (even though she has been Minister for 10 years!!!!!!!!) ....... she is plainly not an effective Minister ............. and then think about her other failures in Road Traffic, Post Office, public bussing and mailboat/domestic aviation services .......... I agree with the sentiments of Mudda Sic

Maybe Basil and the boys need to start watching channel 411 or maybe 207 or 209 or 210. They all seemed to know that we would be getting a lot of rain and they are either in Fla. or Atl. The girls are right on the ball with what is going on in our country, and we report an 8:00 advisory as a 9:00 advisory and talk about how brilliant NEMA is. BS.

Early yesterday the rain storm was so severe one could not see the Bah Mar buildings as you drove past. Then before noon main Bay Street was under water and hundreds of tourists who has disembarked cruise ships waded their way through Bay Street. The ares from the Sheraton, where the Chinese has constructed the parking garage was extremely flooded all the way to Nassau Street. This area seems to flood now,even with short downpours because the workers constructed curbs and walkways without proper drainage. The rainstorm intensified and there were wash outs especially in the western end of the island. Then checking the Weather Channel there was a warning posted from earlier in the day about severe rainstorms and possible flooding over several Bahamian islands. So if the radar in New Providence is not working the Met office should not drop the ball and leave Bahamians in the dark and panic. When the roads started to flood, many persons like in Hanna Road and Tropical gardens and the area North of the airport runway panicked and though it was another sea surge.

The Weather Channel Clearly Showed The Red Blob Approaching Us

If Bahamas radar was not working they could have easily simply tuned into the weather channel for updates as I did, It was all there.

It's a mystery to me why you allow your government to squander so much money without even batting an eye.

Why no protests over this misuse of your funds when the Bahamian people so desperately need help. With the money paid your elected official your country should have the best roads, the best of electricity and residents homes should be more than adequate. This includes the Family Islands.

I've been going to the Bahamas since 1964 and it boggles my mind just how behind the times this country is. Demand those who have squandered finds should be brought up in charges and made to live in some of the shacks your citizens live in.