‘Matthew was angry and The Bahamas was his enemy. From this day on if any hurricane come, I am evacuating.’ 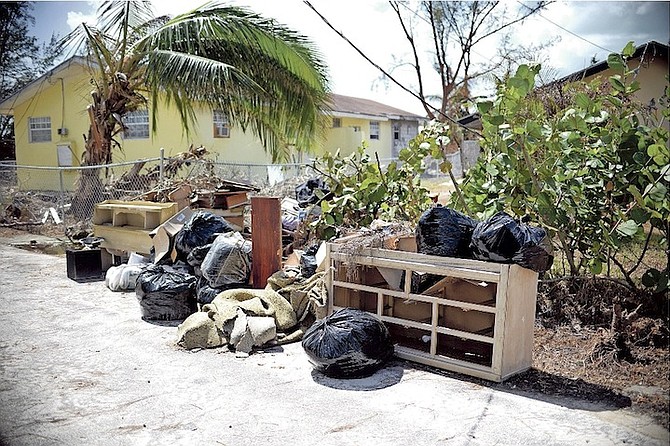 Some of the damage on South Beach Drive. Photos: Shawn Hanna/Tribune Staff

Residents in southern New Providence are still without power 14 days after Hurricane Matthew hit. But the memories of the storm’s brutal force are still vivid, Sancheska Dorsett hears . . .

PASTEL Gardens resident, Sonia Roberts said that in 50 years, she has never seen a storm rip through New Providence with the “anger and wrath” that Hurricane Matthew did a little over two weeks ago.

Fighting back tears yesterday Ms Roberts recalled how quick thinking saved her life and those of her grandchildren as she hurried to “shove them in the manhole” of her home as the water rushed into the house from broken windows and a fallen door.

Ms Roberts told The Tribune that Hurricane Matthew came with one mission - “to destroy and eliminate”. She said the homes in her area, and the surrounding South Beach and Faith Gardens subdivisions, were “mashed up” by Matthew’s force.

When The Tribune arrived in the area, representatives from the National Emergency Management Agency (NEMA), the Royal Bahamas Defence Force (RBDF), the Department of Social Services and Urban Renewal were canvassing the area, assisting residents and doing assessments,

Yesterday marked the 14th day without power for most residents in the area, and with the dozens of downed power lines and flood damaged homes, there is no telling when power will be restored.

“About 4.30am Thursday morning, I was getting up and checking and looking outside because we have a lot of pine trees in the back of the yard and they were just licking and hitting and I saw the water in the back rising. I woke up my son and I said ‘We have to go, its time for us to start seeing what we can do and what we can save because this water is really coming up’.

“While we were doing that, all I heard was a loud crack and the pressure from the rain took off the plywood from the house and the window broke and the water was coming inside. So I was trying to find towels and blankets to stop the water. Time as I finished that I went into the next bedroom and the whole panelling dropped, so I had put more blankets there.

“Now when I went into the next bedroom, the whole plywood came off and the water was flapping and pouring in. So I said to my boy, ‘We can not worry about no bed or nothing’, so I we took the mattress off the bed and we pushed it to the window to stop the rain from coming in.

“We then went in the bathroom and there was a crack straight down the wall. The whole house shifted, and the hallway where the columns were broke up all the tiles and everything. We went in the kitchen and the whole back-door flew open so I said the best thing to do was leave, the water was coming into the kitchen.

“So we started to try and bail the water out and put it in the sink. We then called for help. We had to leave. The water kept rising and I thank God that my government and Minister Shane Gibson, they build the windows high so the water couldn’t come in too much.

“By the time we were rescued, the water was so high my grand baby, who is nine, couldn’t stand in it. They had to lift her and when I stepped down to go into the truck, the water was up to my breasts.”

Although she lost so much, Ms Roberts said she is grateful that no one died in the storm. She also said next time the government suggests she evacuate, she will leave her house “without a second thought”.

“Miss, this was an experience. I am 50 and I have never experienced anything like this in my whole life - that distraught me. Things were happening so fast,” she said.

“We had to forget about things and save our lives. We also rescued about seven people when we were leaving. Hurricane Matthew, I will never forget this as long as I live. Matthew was angry and the Bahamas was his enemy. Matthew came with such a force, like he had an enemy, you could hear the force and the anger in the wind.

From this day on if any hurricane come, I am leaving, I am evacuating. The whole of Pastel Gardens and South Beach is mashed up.”

Ms Roberts said residents in the area are in desperate need for water, tarp and clothing and any help would be appreciated.

BPL says it has restored electricity to more than 80 per cent of customers in New Providence.